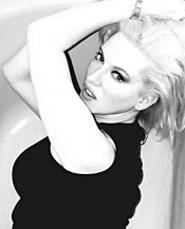 Around the Corner is celebrating its 30th anniversary this weekend with a bunch of free events. The venerable Lakewood bar kicks off festivities at 3 p.m. today by selling beer just like it did three decades ago -- at dirt-cheap prices! There's also free food. The first 500 people through the doors tomorrow night get a commemorative T-shirt and a chance to win a pair of Browns tickets. On Saturday, a classic-car show fills the parking lot outside the tavern. And mark halfway to St. Patrick's Day on Sunday with a traditional Irish brunch and tunes at 9:30 a.m. Live music plays throughout the celebration. All the action happens at Around the Corner, 18616 Detroit Avenue in Lakewood; call 216-521-4413.

You might know actress Robyn Griggs from the soap operas Another World or One Life to Live. Then again, you might know her from the gore flicks Zombiegeddon and Dead Clowns. "I'm a big horror-film freak," coos Griggs, who's hosting the Twisted Nightmare Weekend. "They're so creative in the ways they do things. They don't have a million dollars to spend." Joining Griggs in the meet-and-greet lines are Bill Johnson (The Texas Chainsaw Massacre 2), Reggie Bannister (Phantasm), and David Naughton (Dr Pepper commercials). Horror flicks will unspool throughout the event, and vendors will be selling everything from movie makeup to splatter videos. And Griggs maintains that she's never been more comfortable. "After I left Another World, I was just wiped out," she says. "I had done everything I had planned to do -- Broadway, MTV, commercials. But the one thing I wanted to do was horror films. And now I am having the time of my life." It runs 4 to 9 p.m. Friday and 10 a.m. to 6 p.m. Saturday and Sunday at the Quality Inn Suites, 7230 Engle Road in Middleburg Heights. Admission is $10 ($15 at the door). For more info, visit www.twistednightmareweekend.com.

Babies Having Babies, opening tonight at Karamu House, has an intriguing history. Kathryn Montgomery and Jeffrey Auerbach's play was originally staged in 1986 as a CBS Schoolbreak Special that won four daytime Emmys (including one for Martin Sheen, who directed). Summerland vixen Lori Loughlin played one of the knocked-up young gals. The story, like all after-school teleplays, has a moral lesson at its core. In this case: Teen pregnancy can really screw up your life. Babies Having Babies runs through October 3 at Karamu House, 2355 East 89th Street. Show times are 2 p.m. Saturday and Sunday. Tickets are $6, available by calling 216-795-7070.

It's been four years since Blossom Music Center's hosted a Fall Family Festival, and organizers are hoping folks remember all the good times: the hayrides, the pony rides, the games, the prizes, and all the clowns and jugglers walking the grounds. If that's not enough to get kids and their parents back, live music, mimes, a car show, and Hugene the Historasaurus have been added to the mix. It takes place from 1 to 6 p.m. at Blossom Music Center, 1145 West Steels Corners Road in Cuyahoga Falls. Admission is free. For more information, call 330-923-0560.

On their 10th album, In Between Evolution, Canada's Tragically Hip strip away the pretenses that weighted their most recent records and replace them with an even blend of political and classic-rock positions. It's the band's toughest record in years, and leader Gord Downie has never been more clear-headed and expressive in both his words and music. You might even call it an evolution . . . The Hip are at the Odeon (1295 Old River Road) at 8 p.m. Tickets are $26.50 and $28, available by calling 216-241-5555.

Senses Fail frontman Buddy Nielsen is the son of former Guiding Light star Lisa Brown (she played the excellently named Nola Chamberlain Reardon). An apparently inherited melodramatic streak runs through the music of Nielsen and his band of fellow 19-year-olds. Let It Enfold You, the New Jersey quintet's debut, is emo-core laced with equal bits mope and rage. Senses Fail kicks off its U.S. tour at the Grog Shop (2785 Euclid Heights Boulevard in Cleveland Heights) at 7 tonight. Tickets are $10 and $12; call 216-241-5555.

Bill Rancic is the first to admit he doesn't know "how to build a damn high-rise. And I'm not going to bullshit people and tell them I [do]." Rancic won the first season of NBC's The Apprentice in April; he's now overseeing the construction of a Donald Trump-funded, 90-story building in Chicago. "You have to change the way you see things," explains the 33-year-old entrepreneur, who has a new book, You're Hired. "And you have to take responsibility for your actions. That's one thing Donald Trump taught me: Do the best you can, and don't be afraid. So many people are afraid of failure, and that holds them back from trying. That's where a lot of people get hung up." But don't look to his tome for a solid business plan, warns Rancic. "Those [how-to] books are bullshit. This is a pop-culture business book." Rancic signs his book at 7 p.m. at Joseph-Beth Booksellers, 24519 Cedar Road in Lyndhurst. Admission is free; call 216-691-7000.

In his pinched white cowboy hat and crisply pressed suit, Junior Brown looks like a throwback to a less pop-minded era of country music. His booming baritone and hot-rod guitar licks, however, are more rockabilly than honky-tonk. On Down Home Chrome, the Austin fixture pens another slick set of odes to cars, girls, and road-trippin'. Onstage, Brown's super-smooth and funny. He's at the Beachland Ballroom (15711 Waterloo Road) at 8 p.m. Tickets are $18 and $20, available by calling 216-383-1124.