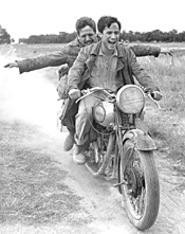 Sculptor Kia Neill says her work "is based in the transformation of identity as it morphs into the domesticated social ideal." Whatever. The pieces that make up her latest exhibition, In-Home Mutations, combine toys and household items to offer a light, amusing, and fun take on retro-kitsch design. Whether slapping a cowboy hat and boots on a long-nosed, skinny-legged furball or adding hair and eyeglasses to a rectangular block, Neill -- at least in practice -- never takes herself all that seriously. In-Home Mutations is at 1300 Gallery (1300 West 78th Street) through October 16. It's open from noon to 7 p.m. Tuesday through Saturday. Admission is free. Call 216-939-1300 for more information.

Think of The Motorcycle Diaries as A Portrait of the Revolutionary as a Young Traveler. Y Tu Mamá También's hunky Gael García Bernal plays freedom fighter and T-shirt icon Che Guevara when he was still Ernesto, a 23-year-old medical student taking some time off to bike across South America with a pal. At first, the pair's adventures consist mostly of run-ins with locals, flirting with girls, and wiping out on their ride. Soon, Ernesto's eyes are open to the plight of laborers across the continent, and a stint in a leper colony sparks compassion and rebellion. It's a seemingly innocuous road trip, where seeds of a revolution are planted. The Motorcycle Diaries opens at the Cedar Lee today. See Short Takes for review.

Jackie Curtis was a playwright, an actor, and a member of Andy Warhol's troupe of freaks and geeks. Superstar in a Housedress takes a look at the flashy and troubled drag star -- who died of a drug overdose in 1985 -- with a series of film clips (from Curtis's theatrical productions, as well as from Warhol-stamped films like Women in Revolt), interviews with fans, friends, and contemporaries (like Harvey Fierstein and Lily Tomlin), and photographs of Curtis (hanging out with famous people like David Bowie). It's a captivating portrait of an artist as a young man . . . and woman. Director Craig B. Highberger discusses the movie after tonight's 9:30 showing at the Cleveland Cinematheque (11141 East Boulevard). It also screens at 9:20 p.m. Sunday. Admission is $8; call 216-421-7450.

It's hard to believe Moot Davis hails from New Jersey. With his thick twang and Hank Williams-like swagger, you'd swear he grew up in a little house somewhere in the backwoods of Kentucky or Tennessee. His self-titled debut album swings effortlessly from one honky-tonk barn-burner to the next. Credit producer Pete Anderson (Dwight Yoakam's longtime collaborator), who keeps the arrangements simple and the music unfussy. Davis performs at Wilbert's (812 Huron Road) at 9:30 p.m. Tickets are $8; call 216-902-4663.

Right there, in the middle of Led Zeppelin II, is the greatest drum solo in history. We can't tell you how many times we've listened to "Moby Dick." And we bet plenty of the stickmen showing up at today's Cleveland Drum Show and Festival have racked up many, many hours playing air-drums to Bonzo's percussion masterpiece, too. In addition to all of the drum-related performances and equipment on display and for sale, there are two contests going on: a drum solo competition and a search for the area's fastest drummer. Get ready to bang away from 10 a.m. to 6 p.m. at George's Drum Shop, 2091 Front Street in Cuyahoga Falls. Admission is free; call 866-970-0800.

It's never too early to start thinking about Halloween. It's also never too early to dress up like an intestines-loving ghoul and walk around the neighborhood to get some practice in before the big night. Tonight's free Halloween Experience: Monster Makeup and Spooky Messages program will dispense some cool tips on how to become the best scary monster (or naughty nurse or giant penis) ever. A theatrical makeup expert will be on hand to share some secrets. It starts at 7 p.m. at Lakewood Public Library's Main Auditorium, 15425 Detroit Avenue in Lakewood. Call 216-226-8275 for more info.

There's optimism to be found in these pessimistic times, claims Paul Rogat Loeb, editor of The Impossible Will Take a Little While: A Citizen's Guide to Hope in a Time of Fear. You just need to know where to look for it. "We need to take the long view," he advises. "We're not always going to see the immediate fruit of our actions, but they matter profoundly in ways that we never always see." Essays by Vaclav Havel, Nelson Mandela, Alice Walker, and others discuss the little -- and big -- things that keep hope alive. Says Loeb: "These are people who inspire me." Loeb discusses the book at 7:30 p.m. at the West Shore Unitarian Church, 20401 Hilliard Boulevard in Rocky River. Admission is free; call 440-333-2255.

More than 50 megastructures -- including skyscrapers, factories, and apartment complexes -- are featured in Big & Green: Toward Sustainable Architecture in the 21st Century, an exhibit that brings together environmentally safe buildings that look like they were borrowed from the set of a Star Wars movie. It's at the Western Reserve Historical Society (10825 East Boulevard) through March 6. It's open 10 a.m. to 5 p.m. Monday through Saturday and noon to 5 p.m. Sunday. Admission is $7.50, $5 for kids; call 216-721-5722.

Remarkably, the songs on Mono's new CD pretty much sound like the album's interminable title, Walking Cloud and Deep Red Sky, Flag Fluttered and the Sun Shined. The Japanese quartet makes haunting, ethereal instrumental music that slowly builds to atmospheric heights before it simmers and then deflates on safe ground. Mono is at the Grog Shop (2785 Euclid Heights Boulevard in Cleveland Heights) at 9 tonight. Tickets are $8; call 216-241-5555.