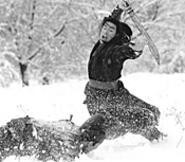 Thirty-four years ago, when he was singing about the black private dick who's a sex machine to all the chicks, we never would've pegged Isaac Hayes as a pots-and-pans kinda guy. But ever since South Park, where his booming bass voice lends the character of Jerome "Chef" McElroy the authoritative gravitas it demands, we can so picture the "Shaft" composer chilling in front of a stove, frying up an omelet with a side of bacon. The Oscar and Grammy winner is at the health museum tonight, cooking up low-phosphorus recipes from his new book, Kidney-Friendly Comfort Foods. Wonder if he's gonna make some chocolate salty balls? Hayes is at HealthSpace Cleveland (8911 Euclid Avenue) from 6 to 8 p.m. Admission is free, but registration is suggested; call 866-220-4467.

House of Flying Daggers (opening today at the Cedar Lee Theater) is the art-house variation on last year's martial arts hit, Hero. The same director (Zhang Yimou) and star (Zhang Ziyi) are involved, but this time, the action is triggered by a blind freedom fighter (a radiant Ziyi) returning to the titular coalition's headquarters, accompanied by an undercover government agent. There are plenty of gotcha! twists and dazzling fight scenes (including a climactic battle in a snow-covered field, which provides striking background for all the spilled blood), but it's the love story that fuels this thoughtful and ultimately tragic film, one of 2004's best. See Film for review.

The Cinematheque is in the middle of a Maurice Pialat retrospective, and while much of the French director's work can be daunting and demanding, 1980's Loulou (screening tonight) is an accessible, human portrait of modern love. Isabelle Huppert plays a successful businesswoman who abandons her friends and lover to shack up with a jobless, hard-drinking skirt-chaser (Gérard Depardieu). Much attention is paid to the details of their blossoming relationship (initially focused on bed-breaking sex) and the class shifts experienced by the tarnished-but-not-ruined heroine. Pialat seldom graced his characters with warmth; Loulou is one of his rare films in which heart matters as much as instinct. It's at the Cleveland Cinematheque (11141 East Boulevard) at 6 p.m. Admission is $8; call 216-421-7450.

The Cleveland Orchestra pays tribute to Martin Luther King Jr. with a pair of performances over the next couple days. First up is tonight's 25th annual Celebration Concert, which features appearances by the MLK Celebration Chorus and the Everett Moore Singers. Tomorrow, the ensemble presents Dance Afrika Dance in Remember Me: A Tribute to Dr. Martin Luther King Jr. , in which song, dance, and words tell the story of the slain civil-rights leader. The Celebration Concert starts at 7 p.m.; Remember Me happens at 4 p.m. tomorrow. Both take place at Severance Hall, 11001 Euclid Avenue. Admission is free, but tickets are required; call 216-231-1111.

Just thinking about taking a boat out on the lake right now gives us the chills. But organizers behind the Cleveland Mid-America Boat Show want you to go to a happier time, six months from now, when temperatures will be in the 80s, bikinis will be donned, and floating vessels will set sail. Then they want you to lay down some dough on a new boat, many of which will be on display and for sale at the 48th annual outing. Also making appearances are fishing champ Jim Stedke, a Treasure Island exhibit (where folks have chances to win prizes), and a hot-dog-shaped boat called the Water Weenie. The show runs through January 23 at the I-X Center, 6200 Riverside Drive. It's open from noon to 9 p.m. through Friday, 11 a.m. to 9 p.m. Saturday, and 11 a.m. to 6 p.m. Sunday. Admission is $10, $4 for kids. Visit www.ClevelandBoatShow.com for more info.

Nothing preps us for a hearty meal of enchiladas, tostadas, and refried beans like a strolling magician. Which is why we're so pumped that Don Pablo's now features magic man Richard W. McClendon performing tableside tricks every Tuesday. Because if anything is capable of making an appetizer of chili con queso and a margarita even more tasty, it's the ol' ball-in-the-hand and quarter-behind-the-ear illusions. Watch McClendon make things disappear (tell him to keep away from your food) from 5 to 8:30 p.m. at Don Pablo's, 10310 Cascade Crossing in Brooklyn. Call 216-265-8284 for more info.

The Producers is one of the funniest films ever made. The "Springtime for Hitler" sequence alone is satirical absurdity at its sharpest. The clumsily titled The Producers, the New Mel Brooks Musical? Not so funny. Still, the Tony-hogging production (opening tonight) jams in many of the 1968 movie's funniest bits, including the premise (a Broadway producer and his accountant set out to cash in on a flop by fleecing the investors) and the mismatched couple behind the scheme. It runs through January 23 at the Allen Theatre, 1407 Euclid Avenue. Show times are 7:30 p.m. Tuesday through Friday and 1:30 and 7:30 p.m. Saturday and Sunday. Tickets range from $27.50 to $82.50, available by calling 216-241-6000.

Thomas Sayers Ellis, a Case Western Reserve University teacher, writes poems about urban life. Poverty, desolation, and hopelessness populate his debut collection, The Maverick Room. "It's a metaphor for youth culture," he says. "Every breath, every word, every syllable is a rhythm and movement." Though he easily and readily drops Devo references in conversation, Ellis could be a hip-hop head; his poems stream with a steady-flowing rhythm and cadence that would fit comfortably atop an 808-fueled beat. "The poem isn't a flat thing that's already happened," he says. "It's a thing that can be experienced -- and experienced differently each time. I'm trying to destroy the laws between spoken word and academic poems." Ellis reads and signs his book at 7 p.m. at Joseph-Beth Booksellers, 14519 Cedar Road in Lyndhurst. Admission is free; call 216-691-7000.