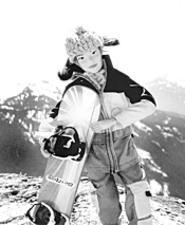 Sarah Strohmeyer loves her Bubbles. Bubbles Betrothed, the fifth book to feature her blond heroine, Bubbles Yablonsky, finds the hairdresser-cum-reporter-cum-sleuth investigating the death of a murder suspect while juggling an ex-husband, the Polish Mafia, and a boyfriend who pops the question under suspicious circumstances. Strohmeyer herself has done time behind the news desk, working as a court reporter for The Plain Dealer in the '90s. Since then, she's amassed quite an audience of Bubble-heads, avid fans who find a kinship with the stiletto-heeled, leopardskin-print-wearing detective. Strohmeyer signs Bubbles Betrothed at 7 p.m. at Joseph-Beth Booksellers, 24519 Cedar Road in Lyndhurst. Admission is free; call 216-291-2467.

Canadian folk-rockers the Duhks could be from anywhere. On their self-titled debut, they play Celtic romps, Appalachian mountain music, blue-eyed soul -- even a Sting cover. They're also one of the most natural-sounding bands you'll see onstage this year. Unplugged, for the most part, the five members (three guys, two gals) create a soothing ocean of harmony with banjos, fiddles, and homemade percussion instruments. The Duhks perform at 9 p.m. at the Beachland Tavern, 15711 Waterloo Road. Tickets are $10; call 216-383-1124.

The next-best thing to snowboarding off a cliff or kayaking down a Uganda river has to be watching other people do it onscreen. At the Banff Mountain Film Festival, more than a dozen short flicks unspool, including Ouray Ice (about a rock- and ice-climbing competition), Chasing the White Demon: No Big Names 3 (which features plenty of risk-taking on rafts and kayaks), and The Collective, about mountain bikers. Show time is 7:30 p.m. tonight and tomorrow at the Ohio Theatre, 1519 Euclid Avenue. Both nights feature exclusive films. Admission is $30 tonight, $25 tomorrow; call 216-556-5170.

Shemekia Copeland is one of modern blues' true old-school belters. With a sound like Tina Turner crossed with Chaka Khan, she's held her own onstage with legends like B.B. King and Buddy Guy. And she's only 25. The Harlem-bred singer's latest CD, 2002's Talking to Strangers, was produced by N'Awlins funk powerhouse Dr. John, who was a friend of Copeland's father, the late blues guitarist Johnny Copeland. She's working on a new album, due this summer, with veteran Stax Records guitarist Steve Cropper behind the boards. Copeland's testing several of the tunes on the road, with a stop at Wilbert's (812 Huron Road) at 10:45 tonight. Tickets are $15; call 216-902-4663.

Eddie From Ohio isn't from Ohio. The Americana band is from Washington, D.C. Its name was inspired by drummer Eddie Hartness, who once had a girlfriend who affectionately referred to her man as Eddie from Ohio, perhaps as an homage to fIREHOSE guitarist Ed "From Ohio" Crawford. And on its ninth album, This Is Me, the band finally finds the balance between modern folk and traditional country it's been edging toward for more than a decade. Producer Lloyd Maines (father of Dixie Chick Natalie and one of music's best pickers) gives Eddie a much-needed injection of rootsy soul and porch-song hominess. Eddie From Ohio plays the Beachland Ballroom (15711 Waterloo Road) at 8 p.m. Tickets are $15; call 216-383-1124.

On its new EP, False Hope, El Paso punks Siva cause a lotta commotion, tearing vocal cords, pulling at guitar strings, and generally creating a blistering work that's short on actual songs, but loaded with 'tude. You might find yourself wondering what all the fuss is about -- through all the spit and screams, it's tough to figure out just what Gregg Sosa is getting all worked up over -- but you'll quickly be pulled into the band's turbulent storm of sounds. Siva opens for Sparta at 7 p.m. at Peabody's, 2083 East 21st Street. Tickets are $15; call 216-241-5555.

Zhang Yimou, who directed the terrific martial-arts love story House of Flying Daggers, got his start crafting subtle, peacefully paced films about displaced people stuck in situations over which they have no control. His first real masterpiece, Ju Dou, is screening at the Cinematheque tonight. It was the first Chinese movie to be nominated for a Best Foreign Language Film Oscar (in 1989); it was also banned in its homeland. Set in the 1920s, the action revolves around a poor girl forced to marry the old tyrant who oversees the factory where she's employed. Unhappy, unloved, and facing a life of misery, she begins an affair with her husband's young nephew -- a recipe for tragedy. It's a moving story, but it's Zhang's glorious camera work -- the rainbow of splendid colors that fueled Daggers is on display here -- that steals the show. A discussion follows the 7 p.m. screening at the Cleveland Cinematheque, 11141 East Boulevard. Admission is $10; call 216-421-7450.

David Mull's drawings on display in Small Worlds: Actual Size pack a lot of detail in their tiny spaces. Working mostly with cityscapes -- modern-day construction sites, ancient amusement parks -- Mull twists and turns his subjects so insides are out, outsides are in, and the entire drawing appears to wrap around itself. They're at Headfooters Outsider Art Gallery (12610 Larchmere Boulevard) through May 14. It's open 11 a.m. to 5 p.m. Tuesday through Friday and 11 a.m. to 6 p.m. Saturday. Admission is free; call 216-795-1668.

In Sarah Stonich's The Ice Chorus, a divorcée moves to Ireland to be closer to the man she met on a trip with her husband in Mexico. It's a travelogue, but it's also much more. "It was inspired by the landscape," says Stonich. "I also wanted to write a boomer-age romance." Her St. Paul roots also come into play. "I went to Ireland to work on another book. But I was so overwhelmed, I couldn't write about Minnesota." Stonich is at Joseph-Beth Booksellers (24519 Cedar Road in Lyndhurst) at 7 p.m. Admission is free; call 216-912-1975.