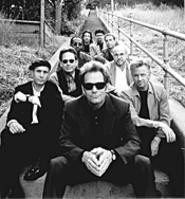 Ian McLagan played keyboards in Faces, one of the most underrated groups of all time. And unlike former bandmate Rod Stewart, McLagan is still making tough-sounding records. His latest album -- last year's Rise & Shine! -- is loaded with beer-soaked pub rockers that straddle twang, pop, and the riff-heavy variation of the blues he helped construct with Faces. McLagan's onstage cohorts these days, the Bump Band, include sidemen who've gigged with Canned Heat, Joe Ely, and Ray Wylie Hubbard. Should be a raucous time when they play the Beachland Ballroom (15711 Waterloo Road) at 8 tonight. Tickets are $12; call 216-383-1124.

In Internal Baggage Project: Part One: Slangs, Slurs, and Derogatory Words, opening today at Cleveland State University's Art Gallery, photographer Julius M. Lyles III takes a look at verbal stereotypes. Taking pics of family and friends, the black Lyles deconstructed and then reconstructed the pics using Photoshop. The result is more than 125 photos -- with titles like "Nigger" and "Tar Baby" -- that manifest into ugly, distorted images of the words on display. It's both educational and shaming. It runs through July 15 at CSU's Art Gallery, 2307 Chester Avenue. Hours are 8:30 a.m. to 6 p.m. Monday through Friday and 9 a.m. to 5 p.m. Saturday. Admission is free; call 216-687-2103.

Buffalo's Last Conservative was recently granted a slot on MTV2's Advance Warning, which is essentially the music net's way of saying it's a band to watch. Its debut, On to the Next One, was produced by Goo Goo Doll Robby Takac, who infuses the album with a solid heartland crunch, coupled with a dicing modern-rock ring. It's hardly groundbreaking stuff, but it oughta please Friday-night concert audiences well enough. Last Conservative is at the Hi-Fi Club (11729 Detroit Avenue in Lakewood) at 9 p.m. Tickets are $5; call 216-521-8878.

Cleveland Cinematheque is celebrating its 20th year with a two-month tribute to one of the very best directors ever to stand behind a camera and shout "Action!" Hall of Mirrors: The Films of Orson Welles features more than two dozen of the filmmaker's works, including the still-spellbinding debut Citizen Kane, its follow-up The Magnificent Ambersons (which was taken out of his hands and recut by an irritated studio), the stunning noir Touch of Evil, and a pair of flawed but intriguing Shakespeare tragedies, Macbeth and Othello. In addition to the famous features, rarities and latter-day oddities (like F for Fake) will be shown. It kicks off at 7 tonight with the granddaddy of them all, 1941's Citizen Kane, at the Cinematheque, 11141 East Boulevard. Admission is $8. Call 216-421-7450 for a complete schedule.

Kansas hard-rockers Esoteric bring a midwestern touch to their brand of sludge-metal. On their second album, With the Sureness of Sleepwalking, the fivesome tears through songs with admirable dedication to their ass-shredding skills. This is music designed to be played very, very loud, with no concern for community noise laws. That the group achieves this while offering a meticulous sense of rhythm and style is quite an accomplishment. Esoteric is at the Agora Ballroom (5000 Euclid Avenue) at 7 p.m. Tickets are $12; call 216-241-5555.

There are many ways to spend today, the most patriotic of holidays. Cookouts with friends. Firecrackers with neighbor kids. Lots and lots of booze in the backyard, while you attempt a drunken game of bocce. But our absolute favorite thing to do is soak in the sun and listen to the Blossom Festival Band rip through some classics. Conductor Loras John Schissel leads the ensemble through a Celebrate America! program that includes faves by Copland, Sousa, and Tchaikovsky. And stick around after the music for the big fireworks show. The concert starts at 8 p.m. at Blossom Music Center, 1145 West Steels Corners Road in Cuyahoga Falls. Tickets range from $17 to $38; call 216-231-1111.

The Fourth of July was yesterday, you say? So what! That's no reason to stop the party. Summer holidays are all about doubling your pleasure. The Cleveland Orchestra will even help you stay in the mood with its free Star-Spangled Spectacular Concert and Festival. It starts at 4 p.m. with performances by local groups (like Hue People and the New Barleycorn), before the orchestra takes the stage for a big, bombastic show of brass with Wagner, Tchaikovsky, and Sousa tunes. Plus more fireworks! So, tell your boss you won't be in today, and head downtown to Public Square. Visit www.clevelandorchestra.com for more information.

Back in the day, Reel Big Fish was a real big deal. But folks don't care so much for its O.C.-blessed ska-punk anymore. That doesn't mean the Fish should be tossed back in the sea of forgotten '90s rockers -- there are still some mighty sounds on its new CD, We're Not Happy 'Til You're Not Happy. Though it's telling that the album's best cuts are a trio of covers: Morrissey's "We Hate It When Our Friends Become Successful," Tracy Chapman's "Talkin' 'Bout a Revolution," and Social Distortion's "Story of My Life." Onstage, it all comes together. Hear for yourself at 6 p.m. at the Odeon, 1295 Old River Road. Tickets are $20; call 216-241-5555.