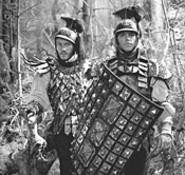 You know what we're gonna miss most about summer? Hint: It's not catching up on Lost reruns or cooling off in the multiplex with a big tub of popcorn. It's the free weekly outdoor concerts that every community holds this time of year. Akron's Downtown at Dusk series ranks as one of the area's best and oldest (now in its 21st season). It concludes tonight with a performance by the Hi-Frequencies, a surf-rock/power-pop combo made for summertime fests like this. Tasty eats and cold beverages complement the tunes. Music plays from 6:30 to 8:30 p.m. at Summit Artspace, 140 East Market Street in Akron; call 330-376-9186.

Director Terry Gilliam likes his films grand. Brazil, The Fisher King, and Twelve Monkeys contain some of the most majestic images ever put onscreen. In the Monty Python vet's latest movie, The Brothers Grimm (opening today), Matt Damon and Heath Ledger play fairytale-writing siblings who dupe villagers into thinking they can rid their towns of monsters. All goes well until a real fiend emerges. An enchanted forest, a big bad wolf, and a mirror on the wall all figure into the action, which frequently bests the occasionally hollow narrative. See Film for review.

This weekend, we plan to walk like an Egyptian. We also hope to eat and make crafts like one. It's all at the 17th Annual Egyptian Festival, which features authentic food like kofta, lamb shanks, and falafel, live music, and hands-on activities for the kids. But we're most excited about King Tut's Bazaar -- an arts-and-crafts area featuring wood, brass, and cotton imports -- where we hope to score one of those Wadjet eyes and maybe an ankh. They'd go nice with the rest of our bling. Make like Tut from 4 to 10 p.m. today, noon to 10 p.m. tomorrow, and 1 to 6 p.m. Sunday at the St. Mark Coptic Orthodox Church of Cleveland, 2100 East Pleasant Valley Road in Seven Hills. Admission is free; call 216-642-7691.

After seeing Lords of Dogtown, we've been dying to test our skateboarding skills all summer. Today's Skate Jam in Massillon will finally give us a chance to rock like the big dogs. And just in case we chicken out at the last second (those ramps are hella cool, but we prize our elbows, knees, and other parts), there'll be plenty of live music to drown out our cowardice. Get ready for bone-breakin' action from 6 to 10 p.m. at the Massillon Recreation Center, 505 Erie Street in Massillon. Admission is free; call 330-832-1621.

The three short documentaries that make up the occasionally provocative Cinevardaphoto have two things in common: They were all shot by Agnès Varda, and all center on photographs. The first film, 2004's "Ydessa, the Bears, and Etc.," is the newest and the best of the bunch. It profiles an art exhibit that gathers hundreds of vintage pics of people (snuggling kids, beefy athletes, and naked ladies, among them) posing with teddy bears. In the second short, "Ulysses" (from 1982), Varda revisits a beguiling photo of a naked man, a naked boy, and a dead goat that she shot on a beach 30 years before. And in the 1963 snoozer "Salut les Cubains," hundreds of photographs, taken not long after Fidel Castro seized power, present a glimpse of Cuba . . . that doesn't look all that different from the way it does now. Who knew a dead goat would be more exciting than a revolution? Cinevardaphoto plays at 6:30 tonight and 8:50 p.m. tomorrow at the Cleveland Cinematheque, 11141 East Boulevard. Admission is $8; call 216-421-7450.

Today's Blossom Festival Band Goes to the Circus program conjures pleasant memories of dancing poodles, cannon-launched daredevils, and enough cotton candy to keep us up for the next three weeks straight, so count us in! Loras John Schissel leads the ensemble in a concert featuring famous big-top tunes -- like the frantic one that accompanies acrobats on trapezes and the playful one you hear as all those crazy clowns come out of that little car. Also, listen for the tuba player. Tonight's his night to shine! And be sure to get there before the 7 p.m. show time, because face-painters, stilt-walkers, jugglers, and clowns will be strolling Blossom Music Center, 1145 West Steels Corners Road in Cuyahoga Falls. Tickets are $18 to $38; call 216-231-1111.

It's been many Septembers since we've been able to say this, but there is post-season hope for the Indians. They've built a core of exciting players and a pitching staff that rivals any other. In the thick of the Wild Card hunt, the Tribe opens a three-game homestand tonight against the fading Detroit Tigers. First pitch is 7:05 p.m. at Jacobs Field, 2401 Ontario Street. Tickets are $6 to $45; call 866-488-7423.

Over the next six weeks, three lamas from the Namgyal Monastery in Tibet will set up camp in City Hall and make art. Specifically, they'll be creating Circle of Compassion: The Sand Mandala Painting of Tibet. If you've never seen one of these things, they're freakin' amazing. Millions of colorful sand grains turn into an intricate, sacred design. And you can watch it as it happens for free from 10 a.m. to 4:30 p.m. Monday through Saturday (through October 8) at Cleveland City Hall, 601 Lakeside Avenue; call 888-262-0033.

Shh . . . this is a library. And it rocks! Cleveland Public Library's Rock My Soul: The Black Legacy of Rock and Roll explores every musical ingredient -- including gospel, blues, jazz, and R&B -- that went into rock and roll's stew. Ten Detroit artists contribute vibrant paintings, which can be just as funkified, varied, and colorful as the music itself. It's on view at the library's Martin Luther King Jr. branch (1962 Stokes Boulevard) through January. Admission is free; call 216-623-2800.