by Erich Burnett and Cris Glaser 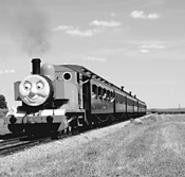 Thomas the Tank Engine is the cheeky blue train with the perpetually sunny grin, and there's little wonder why: The British-born steam engine, adored by preschoolers on both sides of the Atlantic, is a cash cow of the highest order. Day Out With Thomas, four days of train rides on a life-sized Thomas, keeps the fires stoked at the Cuyahoga Valley Scenic Railroad. In 2002, Thomas drew 21,000 visitors -- more than for all of its other events combined.

Thomas rolled onto American soil with the PBS program Shining Time Station in 1989, and the resultant craze continues today in the form of more than $325 million earned annually from Thomas merchandise. That's why, when young engineers flock to the Cuyahoga Valley this weekend for rides on Thomas, they will also be greeted by a pair of enormous tents full of Thomas loot.

"You name it, we've got it. Everything. I'm not kidding," says Nichole Difiore of the Scenic Railroad, which receives a cut of all merchandise sales. Sir Topham Hatt, the controller of Thomas's railroad, will also be on hand, along with magicians, clowns, storytellers, singers, and a petting zoo. Trains depart every 45 minutes, beginning at 9 a.m. Friday at the Boston Mills Station, 7100 Riverview Road in Peninsula. Tickets are $14 per rider; call 866-468-7630. -- Erich Burnett

The Kloose family is at the state fair, and someone's stolen their laptop! Mike's recipe for the chili cook-off is on it; so is Anita's music for the singing competition. They've narrowed the suspects to five. Whodunit? That's the caper to be solved at Court TV's Digital Mystery Tour, a free interactive crimebuster-on-wheels, where kids crack the case by touch-prompting kiosks, using forensic evidence as clues. "People like to see how things are laid out," says Court TV investigator Frank Lee. "It's the fascination behind the outcome." It's at Great Northern Mall (4954 Great Northern Boulevard in North Olmsted) Wednesday and Thursday, May 28-29; call 440-734-6300. -- Cris Glaser