Eternal youth trades in his green tights for blue denim.

May 10, 2001
comment
Peter Pan Produced by the Great Lakes Theater Festival at the Ohio Theatre, Playhouse Square, 1519 Euclid Avenue Through May 20 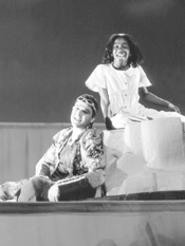 In that great analyst's office in the hereafter, Dr. Freud must be stroking his beard with satisfaction. The Great Lakes Theater Festival's interpretation of Peter Pan offers a bizarre modernized goosing of J.M. Barrie's beloved narcissist in green tights, who as a baby ran away to be with the fairies and spent his life trying to ward off the responsibilities of adulthood.

One of the great ironies of Victorian/ Edwardian children's literature is that its two central works emerged from a couple of spinsterish geniuses' obsession with prepubescent children. Just as Lewis Carroll invented his prim and precocious Alice as an expression of longing for little Alice Pleasance Liddell, so the mother-obsessed Barrie conceived his Peter Pan as an ode to his summer frolics with the young Davis brothers. In his dedication to the published script, Barrie wrote: "I made Peter by rubbing the five of you violently together, as savages with two sticks produce a flame. That is all he is: a spark I got from you."

Since its debut in 1904, this play has been encased in Edwardian whimsy, emasculated by Disney, and saturated in the luscious musical whipped cream of the 1954 Mary Martin musical. What most people fail to realize is that underneath all the sentiment is a diamond-hard center, focusing on the glorious selfishness and joy of unfettered youth and the melancholy burden that comes with adulthood. The Great Lakes Theater Festival, in its modernization, unmasks the dysfunction beneath the charm. This intriguing shift of emphasis unfortunately also tends to sacrifice the enchantment.

Here, the Festival is working in conjunction with the Cornerstone Theater Company, a California troupe of strolling players who specialize in knocking classics from their hallowed shelves. Cornerstone's modus operandi is to rip the petticoats off aged plays, re-dressing them in the latest Day-Glo styles, and then resetting them in the city in which they're being presented.

To bring their Pan to life, they picked the brains of 800 Clevelanders in more workshops than it took to plan the Trojan War. The results, set in present-day Cleveland, are filled with Scooby-Doo paraphernalia, rap chants, harassed working moms on cell phones, and more ethnic groups than the United Nations. The cumulative effect recalls the just-completed Clinton presidency: lots of liberal bonhomie and good intentions, crashing into some horrendously bad decision-making and shallow problem-solving.

Director Bill Rauch, who manages the Cornerstone Theater, lacks the necessary grace and dexterity to make this production flow. He is pedantic when he needs to be magical.

Going against Barrie's concept of lithe women playing Peter Pan, a male actor was cast in the title role. Richard Augustine brings to mind those emotionally stunted boy/men in backward baseball caps and torn jeans who patronize comic book conventions at various Holiday Inns. His Pan is the antithesis of the personification of youth and joy. Augustine has the courage and ability to make him genuinely creepy and selfish.

The most clever change is a Tinker Bell here expanded from her traditional role as a ball of light into the very sun that animates this Neverland. Ashby Semple pulls off a double feat as puppeteer and actress. She carries a Tinker Bell puppet on a fishing rod while simultaneously playing the role. Hers is a bewitching brand of fairy-speak, half-tinkling/half-human. Like Ethel Merman or Carol Channing, she holds the audience prisoner to her moods. Almost succumbing to Hook's poison, she makes cynical theatergoers turn back the decades to become fearful children clapping her back into life. In a superb embellishment of this adaptation, she finally gets fed up with her master and walks out, taking the play's wonder with her.

Adding soul and texture to the production is Paul James's mysterious and baroque incidental music and songs. Among the flashes of inspiration is the reinvention of the script's original Indians as lesbian cowgirl bandits (alas, with the obligatory Chief Wahoo jokes). Monica Bell's Mrs. Darling has been transformed from a bustled, sugar-spun matron into a PTA mom wittily rushing the kids to a preschool reunion. Jeffery V. Thompson's endearing girth suggests Captain Hook as an egomaniacal panda bear. And in one of the evening's most phantasmagorical visual touches, Sandi McCree presents the Crocodile as a Ziegfeld showgirl.

However, all is not bliss in Neverland. Alison Carey's modernization is clever, but tends to stifle the original's poetry. The central romance between Peter and Wendy has been destroyed by casting a child in this role (Brittany D. Spicer). She's far too young and inexperienced to muster up Barrie's paragon of emerging womanhood.

The Cleveland connection ranges from tenuous to downright phony. (The best they can muster is when Wendy is tied to the mast of a pirate ship, yearning for "Cleveland! A great place to return to!") There would have been far more opportunity for fun had Cleveland stood in for Neverland.

Other thoughts on Great Lakes' Pan:

Most foolish moments: when two of the Lost Boys are revealed at the last minute to be girls, and when the walls fall apart by accident as Pan & Co. head for Neverland.

Most sublime moment: Pan finally takes off his baseball cap to reveal the eternal child is balding. Barrie would have had a coronary, but it says more about the sadness of trying to cling to youth than the whole two hours that preceded it.

There's a lot to admire in this production. At its best, it's tough, clever, and insightful. Yet, at the same time, by putting Pan in the age of Nintendo, much of the magic fairy dust has been blown away.