Thousands of Absentee and Provisional Ballots Will be Tossed Out. Here's Why, and How to Avoid It

Gunther Lahm arrived in the U.S. in 1950 at the end of his parents' protracted escape from Yugoslavia. He was 2 at the time. As refugees, the family sought a new life, one that would grant young Gunther and his seven siblings the democratic spirit of certain human rights and freedoms.

"The right to vote, for us, is a big deal," he says today. That's why, lately, with the presidential election looming, Gunther is pretty fired up.

For the 2014 midterm election, he and his wife, Linda, used absentee ballots to cast their vote. (The couple lives in Franklin County.) Gunther says that everything about the process seemed fine.

This past spring, they got a phone call from an attorney in Cleveland. His name was Subodh Chandra, he said, and he had been mounting a legal battle against Ohio Secretary of State Jon Husted and Attorney General Mike DeWine. Thousands of legitimate votes weren't counted in November 2014, and the Lahms were caught up in that group. Each vote was tossed due to what could be called clerical errors on the part of the voters.

Gunther, an attorney himself, couldn't believe it.

His and his wife's ballots were properly filled out, but they had been placed in the wrong envelopes. (In Ohio, you first must request an absentee ballot. You'll then receive the ballot in the mail, along with a specific envelope to be sent back to the board of elections. You mail the ballot and its envelope back to the board before Election Day.) Gunther's ballot had ended up in Linda's envelope, and vice versa.

Linda had realized this, however — after the envelopes were sealed — and wrote in the necessary changes on each envelope. She and Gunther initialed the edits and dropped their ballots in the mailbox. Done.

Here's the thing: Linda had forgotten to fill in their birthdates.

The Lahms had no idea that this had happened until Chandra came calling this year. "The Franklin County Board of Elections tossed our votes in the trash can, and that got me pretty fired up," Gunther tells Scene. 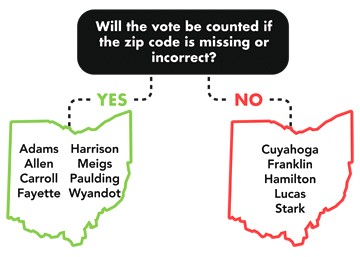 He says the board of elections never told the couple that their votes hadn't been counted.

By the Nov. 5 deadline, more than 1 million absentee ballots will have been requested in Ohio for use in the Nov. 8 election. That's a sizable portion of the approximately 7.7 million registered voters in Ohio. Husted and his office have actively encouraged the absentee vote. ("So you can vote anywhere with confidence," Husted says in one 30-second ad that's been on airwaves recently.) But the simple mistake that erased the Lahms' votes will surely happen again, along with any number of other ballots for that and other simple errors. Recent court rulings have re-codified the many granular policies that allow county boards of elections to toss absentee ballots in the trash.

After the 2014 mishap, Gunther and Linda say they're skipping the snail-mail absentee thing this year; they'll be voting in person.

The ubiquity and scope of the Buckeye State's controversial voting policies are well known.

The Lahms, of course, aren't alone. Take Kenneth Boggs, for example: He voted absentee in 2014 and transposed his birth month with the month in which he filled out the ballot, writing "10" instead of "6" in the birthdate field. Everything else on his ballot was fine, but the board did not count his vote. "I was furious when I found out that my vote was thrown out just because I made a very minor and obvious mistake," he wrote in a signed affidavit.

And there's Elizabeth Coffman: She wrote her current address in the "former address" slot on her provisional ballot form. Her vote did not count in the 2014 midterm election, though she wouldn't learn that until a year and a half later. "I am angry my ballot was thrown out because of this address issue," she wrote.

Keith Dehmann, an active serviceman for the U.S. Air National Guard Reserves, forgot to write in his birthdate on his absentee form in 2014. His vote was canned too. "It made me question whether I should continue doing absentee voting in the future," Dehmann wrote. "I believe my vote should have counted."

This growing problem can be traced most visibly back to a 2010 voting rights consent decree, which itself originates in a 2006 lawsuit filed by a number of advocacy coalitions for Ohio's homeless population. The lawsuit targeted Ohio's stringent voter identification statutes — especially those that were "confusing, vague, and impossible to apply" ­— and, after years of litigation, the resulting consent decree standardized how boards of elections operated on election day across all 88 Ohio counties. "These voters will not be deprived of their fundamental right to vote because of differing interpretations and applications of the Provisional Ballot Laws by Ohio's 88 Boards of Elections," the decree reads. (The consent decree is in effect through Dec. 31, 2016.)

Ohio Senate Bills 205 and 216 were enacted in 2014, essentially reversing principal elements of the consent decree and allowing county boards of election to call their own shots and decide how and why certain ballot errors would disqualify a vote. Litigation on that front continues to this day; the bills under scrutiny intersect with the Voting Rights Act of 1965, a piece of law in which legislators continue to find gray area.

"[A]ny alleged infringement of the right of citizens to vote must be carefully and meticulously scrutinized," according to a landmark 1964 court ruling, a component of the Voting Rights Act.

As the bills transformed into law, the ACLU of Ohio laid out the case: "One of the most concerning aspects of SB 205 is the addition of the word 'incomplete' in reference to a voter's absentee ballot identification envelope. Giving discretion to a few election officials to define exactly what this word means is likely to result in more ballots not being counted. Additionally, this language is overly broad language and could violate federal law."

Opponents of the new laws draw comparisons to the sort of literacy tests that flourished in earlier periods of American history. The Voting Rights Act of 1965 banned those policies. Husted and the state insist that the laws are meant to "make it easier to vote and harder to cheat."

That latter issue has become a daily topic of discussion, led by Donald Trump's unsupported, egregiously dangerous and roundly debunked claims that the election is rigged. Husted announced last year, for example, after an extensive investigation, his office found that 145 non-residents registered in the state in 2014 (27 actually cast ballots). That's .002 percent of the total voting population. This week during an interview on CNN, Husted, himself a Trump supporter, countered Trump's dubious garbage by saying, "I can reassure Donald Trump, I am in charge of elections in Ohio and they're not going to be rigged. It's bipartisan, it's transparent, and there's no justification for concern about widespread voter fraud."

But many are concerned that a disjointed set of standards across the state could lead to problems with provisional and absentee ballots.

With every county working with a different set of policies, it's difficult to keep track of which T's need to be crossed and which don't. Gunther and Linda Lahm forgot to add their birthdates. In Franklin County, that killed their votes. In Wyandot County, however, that would have been fine. In Cuyahoga County, "maybe," according to documents filed in federal court. And that's just one iteration of the law.

Andrea Margaret, a former Clevelander who's since moved out of state, says that Ohio denied her absentee ballot, "because I got married and changed my name, despite letting me vote in the primary with the same issue." The county's denial of her ballot arrived in the mail on the last day of registration in Ohio.

The idiosyncrasies in Ohio's policies are numerous, and they affect provisional ballots too — a type of ballot issued to a voter at a polling station that is used when a voter's information doesn't jibe with what's in the database. On Election day, if you haven't brought a proper form of ID, you'll be given a provisional ballot. It requires you to fill out all your information by hand. And, like the absentee ballot issue, there are county-by-county differences in how your ballot is deemed to be complete.

"For example," Chandra says, "if you inadvertently leave your zip code off of your form in Cuyahoga, Franklin, Hamilton, Stark, or Lucas counties, you will be disenfranchised even if the board has no doubt regarding your eligibility, while Meigs and other small counties will count that same vote. How is that remotely fair?"

Thing is, the state knows all of that.

Ohio deputy assistant secretary of state Matthew Damschroder, the director of elections in the state, said in March 2016 federal court testimony that, yes, the lack of uniform policies across Ohio's 88 counties troubles him.

"Would you agree that it is a serious problem if voters in different counties in the state will have their ballot counted or not counted based on the issue of whether they fill their names in cursive or not?" he was asked during a bench trial in federal court. "Yes," Damschroder replied.

"Would you agree, then, that these voters are being subjected to different standards in the application of Senate Bills 205 and 216?"

And that's the origin story of the litigation born in 2006 and still coursing through the federal court system (NEOCH et al. v. Husted et al., for those playing along at home). Reports to the office of the secretary of state show that larger counties — those like Cuyahoga, Franklin and Hamilton, with greater African-American populations — are enforcing the voter identification nuances of SB 205 and SB 206, while smaller and more rural counties are not (as thoroughly). It's a partisan chess game, sure (see also "gerrymandering"), but the implications run deep both on philosophical grounds and in literal terms during an election when the state expects a record number of absentee and provisional ballots to be cast.