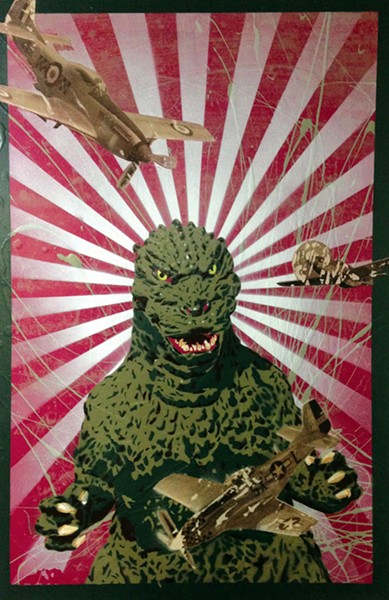 Just in time for Halloween, this month's Third Friday at 78th Street Studios is highlighted by the emergence of a "Three-Headed Beast" of exhilarating new exhibitions by some of the city's most respected artists. These shows include a Godzilla-themed group show at Derek Hess Gallery, the debut of Michael Gill's highly anticipated children's book, A Pocket Full of Change, at Tregoning and Company and Dana Depew's first solo show in Cleveland in over three years. It all takes place this Friday, Oct. 16 from 5 to 9 p.m. (Individual gallery hours may vary.)

When Derek Hess Gallery opened this summer, Hess promised the space would provide opportunities to showcase work by other emerging and established artists. Just two months after opening, it didn't take him long to deliver on his promise. This Friday's Gojira features work by two dozen artists from Northeast Ohio, and as far as Florida and New York.

Gojira takes its title from the original release of the 1954 Japanese film. Longtime Clevelanders may have been introduced to the film franchise through local TV legends like Ghoulardie and Big Chuck and Little John.

"Gojira is the original name for Godzilla," elaborates Hess. "It was changed for the American market, specifically our creature feature hosts like Hoolihan and Big Chuck, who exposed me to Godzilla, and I was never the same. We had a wealth of TV hosts, Ghoulardi, Little John, Super Host and the Ghoul. I grew up with Godzilla. Those movies, along with other monster movies that were brought to us by Cleveland's great TV creature feature hosts, have cast a long shadow over my creative process and imagery."

CAN Journal director, editor and publisher Michael Gill has spent countless hours over the past several months printing at Zygote Press and the Morgan Conservatory in preparation of his latest book and exhibition at Tregoning and Company.

A Pocket Full of Change is a picture book with original rhymes that tells the story of a boy from the west side of Cleveland with a bicycle and a pocket full of coins, which he places along neighborhood railroad tracks to be pressed by passing trains.

"Last winter, Michael shared with me the story of A Pocket Full of Change, and all at once I was immediately swept back to my own childhood, growing up within earshot of the Shaker Heights rapid transit trains," explains gallery owner William C. Tregoning III. "I remembered the hot summer afternoon when my best friend Chip and I rode our bikes over to the tracks to do a little science: set down different coins on the tracks and watch wide-eyed with anticipation as the Rapid train rolled over them in a blur...then inspect the results. In a rush, I immediately agreed to exhibit the accompanying woodcut prints from the book, as well as host the debut of the lovingly hand-wrought book of letter-press text amplified so vividly with his woodcut illustrations."

The limited edition artist book includes twenty multicolored woodcut prints, hand-carved and pulled by Gill. Each book was created from more than 150 blocks, and the text is set in moveable type. Gill has created just 100 signed and numbered copies of the book, as well as very limited individual framed prints.

He explains, "A Pocket Full of Change includes the work of old school, second and third wave Cleveland graffiti writers Shrug, The Sign Guy, Dale Caruso, Prae, Poke, Verb and Lost. Like the writers themselves, their inclusion in this picture book marks territory. This is Cleveland."

Dana Depew's first major solo show in Cleveland in over three years includes three-dimensional, two-dimensional and video-based works produced from reclaimed and found objects. His site-specific exhibition draws inspiration from obscure pop cultural references, as well as the aesthetics and personality of the gallery and building itself.

"Assholes & Elbows will consist of a collection of works produced from found and reclaimed objects," explains Depew. "The materials will be transformed into sensory works utilizing light, sound, and video."

The multi-talented artist concentrated in sculpture at Kent State University. Depew's work can be seen all over town and points beyond – including Melt Bar and Grilled and Big Fun. If you've been to 78th Street Studios recently, you've seen Depew's colorful lights in the parking lot and his new neon sign for the first floor's E11even 2.

Gojira will remain on view by appointment for a limited time. A Pocket Full of Change remains on view during regular business hours through Dec. 18, including Third Fridays in November and December. Assholes and Elbows will close with a reception during November's Third Friday open studios event. Aside from Third Fridays, Assholes & Elbows can be viewed by appointment only.

Derek Hess Gallery and Tregoning and Company are only accessible through a separate entrance on the W. 78th Street side of the building. All Third Friday events are free and open to the public.