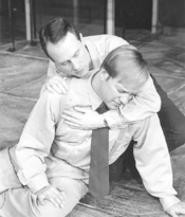 The first image spotlighted in Don McBride's elegant set for The Dying Gaul is the gleaming marble buttocks of a naked soldier impaled by a Roman centurion. This serves as a high-toned metaphor for a homoerotic parable focusing on the damage inflicted by Hollywood's morally bankrupt power brokers on serious artists, making this another battle cry from a damaged intellectual.

Beck Center for the Arts is an almost insanely eclectic theater in the breadth of attractions it cultivates. These range from wholesome corn that feeds the family values of leftover Eisenhower Republicans to exotic fruits for the delectation of the queer intelligentsia. Craig Lucas's The Dying Gaul fits comfortably into the latter category. Director Roger Truesdell has created, with crystal austerity and icy aplomb, a presentation that gives an almost malevolent fascination to a theater that hovers between community and professional.

This 1998 off-Broadway immorality play trades in cyberspace paranoia and brand-name corruption, encompassing the spiritual, professional, and moral. In a taut 90 minutes, its engrossed audience is taken on a Faustian sightseeing tour. Among the attractions are a deeply spiritual Buddhist writer who goes profoundly bad, a wronged wife who uses her laptop computer to turn fiendish avenger, and a studio shark who gets bitten when he simultaneously tries to stake out territory in both straight and gay waters.

Greatly benefiting from the intimacy of a studio theater, McBride's spare and abstract set suggests both a Roman coliseum and a medical school operating theater. Those present are made privy to the equivalent of gladiator games in the age of AIDS.

Robert (Curt Arnold), a writer equipped with a delicate gay sensibility, plummets the depths of Montgomery Clift-like angst, having just buried his agent/lover. He has managed to channel all his exquisite suffering into a screenplay called The Dying Gaul. As the evening commences, the writer is in conference with the golden-haired, blue-eyed Jeffrey (Kevin Joseph Kelly), a profane immigrant from Mamet country with an added bisexual twist. He is out for double rape: First, he wants to appropriate Robert's script, built out of gay suffering, and heterosexualize it for the masses. He attempts a down payment on the earnest writer's soul with an offer of a million tainted bucks. Before the conflicted writer can furrow his outraged brow, the very married producer is down on his knees, not to sing "Mammy," but to perform a more personal act.

Robert succumbs, but is compelled to deliver ranting monologues of self-justification to his smitten therapist. Robert and Jeffrey copulate like bunnies until the fiery Elaine, Jeffrey's brilliant, headstrong wife (played by the even more fiery Alison Hernan) smells that double charge of testosterone in the air.

Taking a crash course from the Medea Correspondence School for Wronged Wives, she concocts a fiendish retaliation. In the most unbelievable aspect of the play, she breaks into her rival's analyst's office and filches his private records. She then commences to joyride through the gay chat rooms of Los Angeles, impersonating Robert's deceased lover. In a chain of circumstances that makes Hamlet look like a sitcom, guilt, betrayal, and changing affections fly through the air with the velocity of a flock of crazed parakeets.

Before evening's end, there is to be riveting emotional blackmail, psychotic outbreaks, and a possible murder, all winning the cast a one-way ticket to the Twilight Zone. Best of all, there is not an ounce of redemption in this deeply cynical but refreshingly brutal work. We see how, in defiance of the laws of Greek tragedy and in contrast to Seuss's Grinch, suffering can diminish a man's heart, shrinking it to the size of a frozen pea.

Jeff Lockshine's lighting is superb, whether delineating rooms or states of mind. Added to costume designer Jenniver Sparano's on-target re-creations of '90s chic, these production values provide the utmost verisimilitude for what is ultimately a staged nervous breakdown. For all who appreciate quality merchandise, this is the perfect offspring of a union between a director who thrives on micromanaging and a work that begs for discipline. Truesdell gives the play the distinct beauty and coldness of a Siamese cat.

He has a knack for bringing out the best in performers. Hernan has always excelled in playing warrior women; Truesdell, playing Henry Higgins, has imbued Hernan with a new look and persona. With Lucille Ball red hair and an intoxicating film-noir dangerous womanliness, she exudes an allure that could turn anyone of any gender into a devoted fan.

As the rotter, Kelly could be a little more butch for the sake of upholding sexual ambiguity, yet he manages to muster up an adolescent neuroticism that gives a clue to his charm. Arnold gives the writer the twisted deviousness of reflections in a funhouse mirror. He effortlessly switches mantles, from poet to cheat, victim to abuser. Like the work itself, he's as changeable and poisonous as mercury.