Hall & Oates make a Christmas album, try to maintain goodwill toward each other. 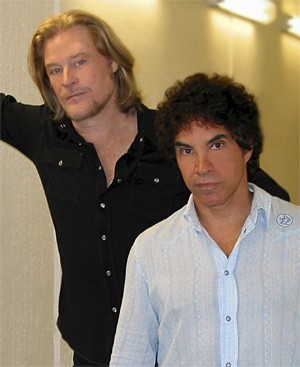 Daryl Hall and John Oates' Home for Christmas became a surprise hit last year. This year, it's turning into the gift that keeps on giving. The CD was recently reissued, and the duo is now on the road performing the album — a collection of seasonal favorites plus a couple of originals — in its entirety.

Oates, for one, sees no reason why an annual tour shouldn't be part of the pair's holiday tradition. "Not a lot of pop groups actually tour around Christmas," he says. "Other than stuff like Mannheim Steamroller and The Nutcracker, there just aren't a lot of shows. This might be a very good niche for us."

Hall & Oates — who topped the charts repeatedly during the '70s and '80s with hits like "Rich Girl," "Private Eyes," and "Maneater" (many of which will be performed at the show along with the seasonal tunes) — had actually talked about doing a holiday album years ago, after their cover of "Jingle Bell Rock" became a perennial favorite during MTV's formative years. But it wasn't until they became indie artists in the '90s that the Christmas collection became feasible.

Despite its limited release, Home for Christmas was warmly received last year, and a radio track, "It Came Upon a Midnight Clear," reached No. 1 on the adult-contemporary chart. The album returns this year with wider distribution via the pair's own U-Watch label. "There were three things we felt a Christmas album had to include," says Oates. "You have to have the classic songs, of course. But coming from the American gospel tradition, we thought that influence needed to be in there. And we felt a Hall & Oates album had to have some original material."

To fulfill that last requirement, Hall co-wrote the title song, while Oates contributed "No Child Should Ever Cry on Christmas," a tune inspired by his son, who's now 11. "I had a family late in life," says the 58-year-old Oates. "When you have a kid, you realize Christmas is all about kids. But writing a Christmas song really isn't much different than writing any other song. You're dealing with a more limited perspective, but that can make it interesting."

Despite their heady holiday plans, however, it's not all visions of sugarplums between Hall & Oates. The contrast between Hall's tall, blond flamboyance and Oates' willingness to give up the spotlight has been frequently noted throughout their long career. (They started making music together in the late '60s.)

But it has rarely appeared to cause tension — even the duo's Behind the Music outing was free of the series' usual rancor. Last summer, though, Hall offered an assessment of the collaboration that took some observers aback, telling Pitchfork that, "We are not an equal duo and never have been. I'm 90 percent, and he's 10 percent, and that's the way it is. And he'd say the same thing."

Actually, he wouldn't. Oates, who says he hasn't seen the interview, seems understandably stung by the comments. "If you're being accurate, then I don't know what to say about that," he says, before delivering a subtle but pointed jab of his own. "Let's just put it this way: Take a look at Daryl's solo career, and then take a look at Hall & Oates, and see what the difference has been.

"What I bring to the table is not the sexy stuff, it's not the flashy stuff," he continues. "But I make it work on a lot of levels. In the old days, I was much more proactive in bringing my ideas and my input in. But now that I have a family and a real life, it's just not as important to me. I think with Daryl, his career is all-consuming. His career and his life are inseparable."

One of the reasons Hall & Oates has endured for so long is because it's a perfect example of how veteran major-label artists can manage the transition to an unfamiliar 21st-century musical landscape. Besides maintaining control of its output through U-Watch, the duo has reaped considerable rewards — not merely financial — as one of the first acts to welcome sampling of its songs.

Ever since De La Soul turned a chunk of "I Can't Go for That" into "Say No Go" in 1989, scores of hip-hop and dance artists have used Hall & Oates samples to fuel their own work, thereby introducing the duo to whole new generations of fans.

"Why would we fight it?" asks Oates. "Any time someone wants to use something you've already done as the basis for something new, that's what pop music is all about. When we started out, we wanted to sound like the Temptations. It's the same idea."