Titan on a Hot Seat

A lawsuit threatens to pierce Dick Jacobs' veil of secrecy. 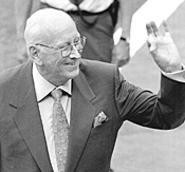 Shopping-mall magnate Dick Jacobs stood in the foyer of his brother Dave's new home and wept.

It was 1979, and the house was 8,000 square feet of pure elegance, sitting on a wooded lot in Bay village overlooking Lake Erie. Bonne Bell Eckert, then president of the Bonne Bell cosmetics company, was amazed. "This is such a wonderful home!" she told Dick as she entered the house.

"He deserves every bit of it," Dick replied, tears falling down his cheeks.

The brothers grew up poor in Akron. Dick still tells how they used to pour hot water into half-empty peanut butter jars and call it soup.

Together they went on to build the nation's first shopping-mall empire: 38 malls, valued at over a billion dollars. They remained best friends until Dave's death in 1992. "Richard was just crazy about his brother," Eckert says. "They loved each other very much."

Before he died, Dave created a number of family trusts to avoid estate taxes and pass on his enormous wealth to his three kids, David Jr., John, and Marie. Naturally, he named his brother trustee. Dick was responsible for managing hundreds of millions of dollars for the future benefit of Dave's children. Dick also was supposed to give his niece and nephews regular payments from the trusts.

But a lawsuit filed in federal court accuses Dick Jacobs of betraying his beloved brother. The suit, filed by David Jr., alleges that Dick has taken or misspent as much as $448 million from the trusts, much of it to prop up failed real-estate investments in downtown Cleveland. It accuses him of failing to make regular payments to his family members from the trusts and refusing to provide an accounting of his actions. Finally, the suit alleges that Dick Jacobs used his position as one of Cleveland's most prominent men to maneuver his brother's heirs out of the family business.

In the process, the lawsuit flashes a rare light into the inner workings of one of Cleveland's most powerful and secretive families.

The year was 1988, and big building plans were on the lips of Cleveland business leaders. Ameritrust, one of the city's blue-blood corporate titans, hoped to move from its run-down headquarters on East Ninth Street to a new 60-story tower at the psychological heart of the city, Public Square.

Jacobs bought the block immediately west of the square in 1988 for $20.3 million. But in 1990, the downtown office market slumped, so the project stalled. In 1992, KeyBank bought Ameritrust. The tower project died. (Jacobs did not return repeated phone calls. His lawyer, Dan Warren, declined comment.)

Jacobs received the city's permission to turn one of Cleveland's most valuable properties into a surface parking lot, which recently was revalued at $6.1 million. He also wound up owning the old Ameritrust headquarters, a warren of dilapidated vacant buildings at the corner of Euclid and East Ninth. Jacobs paid $66 million for the properties. Today they're worth just $15.6 million, according to the county auditor's office.

A few years after the Ameritrust deal fell apart, Jacobs arranged for one of his companies, the Jacobs Group Investment Company, to lend $200 million to three other businesses he also controls. The three companies own the Ameritrust complex and the parking lot on Public Square.

He personally guaranteed $150 million of the debt. And since his niece, nephews, and their family trusts are shareholders in the Jacobs Group Investment Company, they were on the hook for the other $50 million.

The loan came due in September 2001. Jacobs has since extended it several times, and according to the lawsuit, the loan is still not repaid. Since he's both lender and borrower in the deal, Jacobs has the power to extend the loan indefinitely. That makes sense for him, since calling in the loan would force him to pay $150 million from his own pocket.

It also makes sense because, whatever Jacobs did with the $200 million, he probably didn't invest it in the Ameritrust complex or the parking lot.

The former bank's 28-story tower on East Ninth remains dark and largely vacant. The complex is now one of four potential sites being considered by Cuyahoga commissioners as the county's new headquarters. When he submitted his proposal for the development last year, Jacobs conceded that he still hadn't removed or covered the building's asbestos insulation.

All this leaves Jacobs' niece and nephews holding a $50 million debt they can't collect -- for a venture they know nothing about. "It's hard to know what these loans were used for," says David Jr.'s spokesman, Tom Andrzejewski. "That's why one of the things being sought by the lawsuit is a full accounting."

Jacobs pulled a similar move with another loan, according to the suit. The Jacobs Group Investment Company lent $218 million to Jacobs Realty Investors, another company under Dick's control. Much of the money came from his niece and nephews. As in the Ameritrust deal, -the suit alleges, Jacobs is using his position as borrower and lender to make sure the loan is never repaid.

He may also be using the loan to block his brother's family from gaining more control over Jacobs Realty Investors, the suit implies. If the loan were repaid, David Jr., John, and Marie could use the money to buy stock in the company. As it is, the company gets to use their money without giving them decision-making power.

"There is no doubt that Richard E. Jacobs wears many hats and places himself on all sides of multi-million dollar transactions," wrote Jonathan Greenburg, David Jr.'s attorney, in a letter to Dick's lawyers. As a result, David Jr. "has lost all faith" in his uncle's management of the family trusts.

In his written response filed with the court, Dick Jacobs says that his brother's decision to entrust him with the family's fortune "was an eminently wise one," because Dick has used his talent as "one of the leading real estate developers in the country" to "dramatically increase" the value of the trusts.

Nevertheless, David Jr. hopes the court will remove his uncle as trustee and give the Jacobs family's next generation direct control over the trusts.

Much has changed since the 1950s, when Dick and Dave first started building shopping malls. Back then, mall developers needed tremendous schmoozing skills to convince wary bankers to lend them money. And since their companies were private, they could shift assets as they saw fit.

But since the early '90s, the mall industry's brash personalities have been trumped by the need for huge sums of cash. Most independent developers are gone, replaced by real-estate investment trusts. REITs are successful because they're publicly traded, so they can raise money by selling stock, instead of going through banks.

Yet stockholders don't like all-powerful tycoons, especially ones who move millions of dollars between their companies with scant disclosure. "It has tamed developers down a little, because they have to answer to shareholders now," says Chris Boring, a Columbus retail consultant.

By the late '90s, Dick realized that his way of doing business was on the verge of extinction. So in 1999, at age 74, he put his empire up for sale.

The largest bidder was CBL & Associates, a REIT based in Chattanooga, Tennessee. Negotiations dragged on for months. Soon, a number of Jacobs' key executives announced plans to leave.

One was Martin Cleary, who for years served as president of the Richard E. Jacobs Group. Cleary announced in 1999 that he would be going to work for CBL, where he was already a director.

Jacobs didn't want his top executives leaving in the middle of the biggest deal of his life. So he offered them a total of $30 million to stay until the sale was finished, according to his nephew's lawsuit. In September 2000, the Jacobs Group sold 21 malls to CBL for $1.2 billion. Cleary retired five months later.

Jacobs promised that all of his partners in the Richard E. Jacobs Group would share the $30 million cost equally. But in reality, Jacobs used his brother's trusts "to pay millions of dollars in undisclosed and extraordinary expenses for his own benefit," the suit alleges.

His niece and nephews, meanwhile, believe they lost millions on the deal.

Sources close to the Jacobses say the lawsuit has further divided the family, which hasn't been close since David Sr. passed away.

David Jr., 52, left Akron and his executive post at Goodyear in the late 1990s and now owns an art gallery in Santa Monica. His sister, Marie, 54, owns an interior-decorating company in St. Louis. Brother John, 42, recently entered the real-estate business in Bloomington, Indiana.

Their mother, Barbara, is the only one still living in Cleveland, dividing her time between her Bay Village home and North Key Largo, Florida.

"When [the lawsuit] first happened, Barbara was not on her son's side," says a source close to the family, who spoke on condition of anonymity. "Now she is. She told Richard that she had come to take David's side."

The lawsuit even threatened to break the Jacobses' long-standing practice of secrecy. Dick and Dave Jacobs were well known for ignoring reporters' calls, even for feel-good stories. But David Jr. ended that tradition by posting a two-page press release about the lawsuit on the internet and hiring a public-relations firm to answer reporters' questions.

Dick's lawyer, Dan Warren, has moved to seal all the records in the case. David Jr. countered with a compromise that would seal most financial records from public view.