To Be Gay, Gifted, and Imprisoned 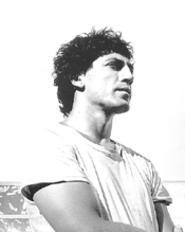 That anyone should consider making a film of Reinaldo Arenas's memoir Before Night Falls is curious. That the person to do it should be painter-turned-film director Julian Schnabel is truly unusual. And that the results should be as good as they are is most remarkable of all. But it would appear that the supernova of the '80s-era New York art scene wasn't just taking a fashionable detour with Basquiat, his 1996 biopic of fellow-wunderkind artist Jean Michel Basquiat. For Before Night Falls deals with a world that no one in New York and precious few elsewhere know much about: Cuba under Castro, as lived through -- which is to say, just barely survived by -- gay artists and intellectuals. It's a decidedly grim picture, even grimmer than the splashy spectacle of Basquiat's self-destruction that left him dead of a heroin overdose at age 28. But unlike Basquiat's, Arenas's story is a downer that doesn't produce despair. And that's because of the exceptional bravery of Arenas himself and the understanding that both Schnabel and his extraordinary leading man, Javier Bardem, have of him, his world, and his time.

Born in 1943 to a desperately poor family in the town of Holguin, Arenas was a teenager when Castro's rebels overthrew the Batista dictatorship. Already distinguished by his teachers -- and damned by his relatives -- for his poetic talents, Arenas was marked for a hard life from the very start. But he was in for a peculiar form of hardship under Castro. Coming to Havana, winning a job at the National Library, and getting attention for his early novel, Singing From the Well, Arenas seemed to be on his way to a successful literary career. But totalitarian regimes have little use for artists, particularly gay ones.

Arenas's second book, The Hallucinations (known as The Ill-Fated Peregrinations of Fray Servando), was censored in Cuba and smuggled to France, where its mixture of everyday observation and quasi-surrealist detail, the hallmark of all of Arenas's writing, won it awards. In Cuba, the author was rapidly gathering respect among a circle of gay writers that included José Lezama Lima and Virgilio Pinera. But this same circle was being even more rapidly marginalized and attacked by the Castro regime, both for its antipathy to Castro's politics and for its flagrant gayness. Totalitarian governments exacerbate certain of the flaws of democratic ones in a rather haphazard manner (for a vivid reminder, see Paragraph 175, Jeffrey Friedman and Rob Epstein's brilliant new documentary about gays in Germany under the Third Reich). The Nazis sent some gays to prison and others to concentration camps for varying lengths of time. Some went through the experience relatively unscathed, while others were subjected to sinister medical experiments. Similarly, in Castro's Cuba, some gay writers were in and out of prison, and others -- like Arenas -- were tossed into the darkest hellholes for years.

Arenas refused to buckle under. When his novels Farewell to the Sea and The Palace of the White Skunks were confiscated by the guards, he set about rewriting them again from memory and had them smuggled out of prison for eventual publication. Finally, in 1980, Arenas was allowed to join the group of "undesirables" on the Mariel Harbor boatlift. Coming to the "freedom" of America, he encountered indifference from the Cuban community and incomprehension from the American left. And then he contracted AIDS. Not wanting to go through its most painful terminal stages, he killed himself in 1990 -- leaving behind his memoir and several novels of incalculable literary and political significance.

Schnabel re-creates it all, thanks to a businesslike screenplay (cowritten with Cunningham O'Keefe and Lazaro Gomez), sharp direction, and a truly amazing performance by Javier Bardem. This Spanish actor, who has appeared previously in films by Bigas Luna and Pedro Almodovar, is a revelation in this role. While he has the advantage of actually resembling Arenas, he doesn't coast on looks alone. In a remarkably precise and incisive way, he shows the writer's move from shy child to assured novelist, from insecure gay youth to confident adult refusing to give in to any form of tyranny, whether human or viral. He's complemented by some excellent supporting work, particularly from the always amazing Johnny Depp, who plays both an imprisoned transvestite (who smuggles Arenas's manuscript in his anal cavity) and a brutal prison guard, and Andrea Di Stefano as a fair-weather gay friend. Olivier Martinez as Arenas's protégé Lazaro Gomez Carriles is likewise impressive -- particularly in the film's harrowing final scene, which alone makes Before Night Falls worthy of one's time.