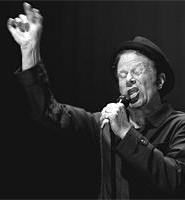 Stateside gigs from Tom Waits are only slightly less rare than total solar eclipses: In the past 19 years, he's played as many shows. The anticipation is so great that when he appeared at a recent show in North Carolina, the crowd erupted enthusiastically. As he launched into the syncopated cacophony of "Singapore," few in the audience cared that Waits' sand-and-gravel vocals were buried beneath the drums. He was there, and that was what mattered.

But over two hours and 23 songs, the mix settled into the house, and the crowd settled into its seats. Waits teased the calm by understating everything about the show; he consciously avoided blowing minds. He played some hits, a quarter of Real Gone, some guitar, some piano, and one new gem. No theatrics, homemade instruments, or pyrotechnic obsessions. Waits just clutched the microphone with one hand while snapping the other back and forth, acting as a well-lubed bandleader for a backing outfit (including son Casey Waits and Roomful of Blues' Duke Robillard) that never seemed capable of shaking its timidity about accompanying him. Perhaps by the time they get to Akron, they'll have made the music their own as much as the fans already have.