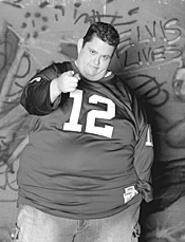 White comedian Ralphie May feels he's sometimes operating under a double standard. "I like doing hip-hop comedy, but I get lambasted," he says. "Eminem does it, and he's a genius rapper. I do it, and I'm a wigger." And the whole urban-vibe trip isn't a flava-of-the-month thing, adds May, a Last Comic Standing vet. "I saw Run-DMC on MTV [in the '80s], and I was like, 'I love that, man!'" he recalls. "Then I listened to Beastie Boys, and it was white boys doing it. I just got into it deeper." But May -- who speaks in black patois and tells Def Comedy Jam-style jokes -- has been too busy to let it get him down. He has three projects in the works at VH-1. "I'm a very bad fat guy," says the gargantuan May. "Most fat guys are content and lazy. I like to take all the money and have all the fun." May is at the Improv (2000 Sycamore Street) Thursday through Sunday. Show times are 8 p.m. Thursday and Sunday and 8 and 10:15 p.m. Friday and Saturday. Tickets are $18 to $21; call 216-696-4677. -- P.F. Wilson

Artistic director Charles Fee says the Great Lakes Theater Festival's Summer Repertory productions -- of William Shakespeare's mannered satire The Merry Wives of Windsor and Moss Hart and George S. Kaufman's eccentric-family comedy You Can't Take It With You -- won't leave viewers baffled, even though they rotate performances on the same stage for the next six weeks. "They offer a larger menu of experiences." If cast members can keep their roles straight night after night, audiences should be able to digest both plays, he adds. "They're wildly different experiences, but they make a good pair." Wives runs Friday through September 1; Take plays August 12 through September 3. Show times are 7:30 p.m. Thursday through Saturday and 3 p.m. Sunday at the Ohio Theatre, 1519 Euclid Avenue. Call 216-241-6000 for tickets (which range from $21.50 to $55) and a complete schedule. -- Michael Gallucci

Prog-rocker Rick Ray's eponymous quintet is banking on ticket sales for A Concert for the Shore Theater to help restore the 1,100-seat venue to its original 1930s splendor. Ray even predicts that the Shore could match the glory of Playhouse Square's Allen Theatre during its rock-and-roll heyday in the 1970s. "When they had great concerts there, like Genesis with Peter Gabriel and Frank Zappa, it was the best," recalls Ray. "I'm hoping the Shore gets the same way." Music starts at 7 p.m. at the Shore Cultural Center, 291 East 222nd Street in Euclid. Tickets range from $7 to $12; call 216-289-8578. -- Cris Glaser