Despite the title and familiar genre, Mr. Explosion says something new. 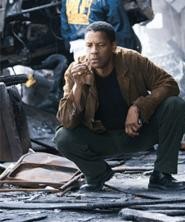 OK, so Jerry Bruckheimer and Tony Scott were asking for it by naming their latest mega-production Déjà Vu. These dudes aren't exactly paragons of innovation, unless taking rhetorical hysteria to awesome new heights counts. As the opening credits roll--by which of course I mean roll, zip, flicker, fade, zoom and swerve--you get a good solid smack of the Tony Scott touch. The man never met a strobe cut, filter effect, or inexplicable helicopter shot he didn't love, and love to inflict on the humblest scene. In this case, it's the boarding of passengers on the Alvin Stumpf Ferry, sailors and kiddies and cute ol' grandpa heading across the Mississippi River for Mardi Gras in New Orleans. Given the way they've been sliced and diced in editing, you'd think they must have plunged into some gnarly vortex of the space-time continuum. We'll be getting to that.

So yeah, Déjà Vu: You've seen it all before. Take that, billionaire losers! Except you haven't quite. Déjà Vu isn't as sleek a genre pleasure as Enemy of the State, but it does have a freaky little trick up its sleeve. The story goes like this: The ferry blows up (seen it), Denzel Washington struts on the scene to investigate (seen it), clues are discovered (seen it), a dead girl is found under mysterious circumstances (seen it), Val Kilmer arrives looking kind of pudgy (...), everyone heads off to a top secret government base and climbs into a gigantic spark plug. There, joined by the usual group of wiseass technicians, they begin to retrace events with the help of Snow White, a next-level surveillance system linked up, naturally, to seven satellites. The console renders real-time composite images of anything that happened four days ago, from any angle, through all obstacles, and in the visual vocabulary of the 21st-century blockbuster. Except that actually it's a time machine. (Now here is something new.)

It's at this point in an otherwise routine techno-thriller that Déjà Vu takes a delirious turn into what might generously be called preposterous sci-fi gobbledygook, but just as accurately described as the most unexpected essay on movie metaphysics ever plunked down in the middle of a Hollywood blockbuster. Hunched over Snow White, ATF stud Doug Carlin (Washington) and FBI agent Andrew Pryzwarra (Kilmer) cyber-stalk the exceedingly lovely Claire Kuchever (Paula Patton), their only lead in the case. As they snoop around her apartment, jiggling controllers like God on an Xbox, the tech heads discourse on the nature of their toy. Space, you see, can be folded in half, like a sheet of paper. With the proper optics and enough electricity to power the Eastern seaboard, you can create a wormhole, a sort of bridge, and on the other side of the bridge is the past. Or whatever. Point is, during all this pseudo-scientific yip yap, we've been watching characters in a movie watch characters in a movie of their own direction. It doesn't take a double major in quantum physics and cinema studies to realize that time travel in Déjà Vu is precisely the concept of movies themselves. Space folded in half: the space of the screen and the space of the things dancing upon it. Snow White is a screen into the past, and what film isn't?

Of course Scott and his screenwriters (Bill Marsilii and Terry Rossio) are less interested in concepts to explore than high-concept gimmickry. But why complain when it results in a car chase that simultaneously blows shit up on two different time planes? Bruckheimer's more-is-more ethos may well have reached a theoretical limit. As for Scott, he heads into the third act with relative restraint, sending Carlin to hunt down a disgruntled patriot (Jim Caviezel) who killed 500 sailors because, you know, the government sucks and stuff. Scott wouldn't know subtext if it rose out of the bayou and ripped off his arm, but that doesn't stop him from sprinkling on references to Katrina (Déjà Vu, the first film shot in post-Katrina New Orleans, makes an emphatic if unnecessary point of staging a big scene in the ruins of the Ninth Ward), domestic terrorism, and Iraq. So Déjà Vu reinvents itself once more as a time-travel romance meets anti-terrorist action flick. Had Scott kept going with this batty project--there's a musical and a dinosaur picture in here somewhere -- I'd have followed him all the way.