Toots on a Roll

The man who gave reggae its name brings back the Maytals. 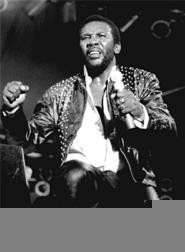 The career of Frederick "Toots" Hibbert predates reggae -- in fact, he's the guy most often credited with naming the genre. But the music's reigning patriarch isn't a museum piece just yet. Last year's True Love -- an album that found the 60-year-old Hibbert and an all-star cast of supporters tackling his classics -- won a Grammy, and he opened some shows for his old friends the Rolling Stones on one of 2005's biggest tours.

Hibbert's return to prominence after two decades out of the spotlight has little to do with the recent resurgence of Jamaican music in America. While True Love featured guests who represented hip-hop (the Roots' ?uestlove), hippie rock (Trey Anastasio of Phish), and even country (Willie Nelson), current chart-busting dancehall singers like Sean Paul were conspicuous by their absence.

The omission, says Hibbert, was by design. "They were not what [manager] Mike [Cacia] and I had in mind for this album," he says. "That's not reggae. I like what they're doin', but there's no comparison."

Such lukewarm praise calls for clarification. Does Hibbert feel that the current crop of digital dancehall is a worthy successor to the Jamaican music he helped pioneer?

"I don't wanna answer that," he says, his raspy laughter suggesting the unspoken reply.

In fact, Hibbert is quite candid about acknowledging his audience, to whom True Love and its rock-dominated guest list seem geared. "Most of my fans are white people," he says matter-of-factly by phone from a tour stop in Las Vegas. "And they have more to say about my songs than the people in Jamaica."

The seeds for the album were actually planted two decades ago, when one of those white fans -- Bonnie Raitt -- did a faithful cover of Hibbert's "True Love Is Hard to Find." But not until many years later did Hibbert finally commission a whole album of such all-star reworkings. Because of his longtime friendships with rock royalty Keith Richards, Jeff Beck, and Eric Clapton, persuading them to appear on 2004's True Love "was very easy to do," he says.

Hibbert was the youngest of seven children in a deeply religious family in Jamaica's Clarendon Parish. His gospel-drenched vocal style came from countless hours spent in the Baptist church choir. It helped make him a star when he left the countryside in the early '60s, forming the Maytals in Kingston with Jerry Mathias and Raleigh Gordon.

Hibbert is convinced that early success was the reason he wound up serving a year in jail on a marijuana-possession charge handed down in 1966. "Ganja? I never smoke ganja," he says. "It was a plant. They see I'm comin' up too fast. So someone -- I'm not gonna call no name -- plant it. Three people planned it. Two died, and one's still alive. And I never hurt them. They hurt themselves, with Jah."

If the intent really was to ruin Hibbert's career, it misfired spectacularly. In prison, he spent his time singing and writing songs. One of them, "54-46, That's My Number" -- which chronicled Hibbert's arrest -- became a huge hit for the reunited Maytals upon his release.

While Hibbert was in jail, Jamaican music underwent a metamorphosis. The frenetic beat of ska slowed to a rock-steady, deliberate heartbeat, then quickened again. The Maytals had a song about the new style called "Do the Reggay," and the term -- with altered spelling -- stuck.

The Maytals' fame transcended the island. "Pressure Drop" and "Sweet and Dandy" were in the soundtrack to The Harder They Come (starring Jimmy Cliff), and during its mid-'70s peak, the trio become the only serious rival to Bob Marley and his Wailers.

The original Maytals disbanded in 1982, and Hibbert did little recording during most of the following two decades. "It was not difficult," he says, "because I still have my talent." Now, with the Maytals name revived, Hibbert is happy to have that talent acknowledged by younger stars like No Doubt and Rachael Yamagata, who appear on True Love.

"Listen to my songs, Marley's songs, Jimmy Cliff songs -- all the great reggae singers. Not dancehall, not hype, not nursery rhymes, but real culture songs," he insists. "People get a message out of my lyrics, and they feel very safe that if they sing my songs, it's a serious concern.

"When you look at all the young people on it, my album is a collective movement."