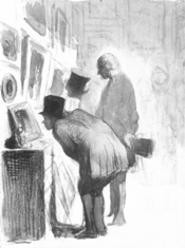 Although the Cleveland Museum of Art has been collecting drawings since 1916, the fruits of its efforts in this area have seldom gone on display. It's not because the works aren't good enough. Rather, it's because overexposure to light can discolor the paper and fade the images. Master Drawings from the Cleveland Museum of Art is thus the first comprehensive exhibit ever devoted to the drawing collection. As such, it has instant importance. There is even more to it than that, though. The quality of the work here is so consistently high, and the accompanying documentation so insightful, that the entire undertaking can stand as a model of how such things should be done.

There's a simple explanation for the high quality: The museum has long prized quality over quantity. From its collection of 2,700 European and American drawings, Chief Curator Diane De Grazia and Curator of Drawings Carter Foster have selected a choice 120. The works range in date from the 15th century to 1965, and more than 100 artists are represented in the exhibit. Works by Raphael and Michelangelo are included. So are works by Picasso and Matisse. The roster reads like a Who's Who of great names in Western art, but the distinctive thing about this show is that these artists are operating here at full creative capacity.

This is the philosophical scaffolding upon which this exhibit has been constructed. In 1936, the American critic Henry McBride could have been talking about this show when he wrote: "A museum's business is always with the superlative successes in any chosen line, and with practically nothing else, leaving the 'lesser-examples-that-prove-things' to the schools for would-be professionals." No creative person (even the one who has withstood the test of time triumphantly) can produce a steady, uninterrupted flow of great works. Picasso had years that, in retrospect, were better than others. Beethoven composed the occasional potboiler. How could it have been otherwise? It's the task of the museum, in McBride's view, to separate the wheat from the chaff and thereby create an environment where artistic excellence can be celebrated. Sure, he would say, there are plenty of flawed works that are nevertheless valuable because they expand our understanding of an artist, a style, or a cultural trend, but museums ought to try to acquire and display work of the highest quality.

All this talk of masterpieces will be deeply distressing for those who value contemporary art. The year 1965 was 35 years ago. What happens when something is new and posterity hasn't had time to decide whether it's good enough to stand the test of time -- does that mean museums should ignore it? That's a tough question, and exhibits like this are not the place to find the answer (as if there could be one definitive answer to this complicated question!). Then, too, there is the charge of elitism. Who, some Clevelanders might ask, could possibly appreciate all these "masterpieces" except a community of scholars? That issue is more easily dispensed with. If you're just willing to spend some time with these intimate drawings, your patience and concentration will be rewarded tenfold. Forget about the masterpiece thing. Just look.

Some people will avoid this exhibit because they can't deal with the audacity of someone actually saying that something could possibly be better or worse than something else. It's an unfortunate reality that happens to be tied to some very noble American traditions. The enterprising American spirit that wanted to throw off the fetters of European influences -- the spirit that Emerson described in his essay "Self Reliance" -- will never be quite comfortable with the hierarchical distinctions that shows like this one implicitly make. McBride knew about all this but insisted, "If you wish to educate the millions in art you must not confuse them at the beginning with lesser examples." The organizers of Master Drawings would probably agree with him.

The work in this show brings us into the privacy of the artist's studio, letting us see how inspiration is often a matter of revision and refinement. That's one of the characteristics of a drawing: the heightened sense of intimacy. Foster explains that part of the appeal of a drawing is that it is "a very direct expression of an artist's hand and his or her thoughts. Imagine a glimpse into Michelangelo's mind." A drawing by Fra Bartolommeo dating from around 1508 is certainly a glimpse into the mind of that artist. In deft strokes (hatch marks and crosshatch marks are superbly varied to suggest textural shifts), the artist creates a rustic landscape which, though not overtly religious, breathes a gentle expansiveness that is like a sermon. It's a virtuoso performance, but it's in the service of a selfless vision of nature.

The Michelangelo work in the exhibit, also a highlight, is a drawing rendered in red chalk dating from around 1510. It's a seated nude male figure that Foster tells us was the basis for one of the figures in the Sistine ceiling. Foster explains that, though the anatomical precision here would not ultimately wind up in the analogous figure in the ceiling, Michelangelo probably felt that "he would be able to draw it better draped if he knew precisely what was underneath." Thus, this is a rare chance to see how a great artist thinks out loud. By viewing this and other works in this show, we can gain a better understanding of the creative processes that made these artists so compelling.

The exhibit, which is shaped chronologically, includes several outstanding 19th-century works, one of which is a watercolor and gouache by the English artist John Martin. Depicting a man and a woman wandering among the immense English moors as a storm approaches, this work dating from 1842 is an intriguing mixture of peacefulness and latent malevolent force. One might find parallels with English fiction of the time. Certainly it doesn't require much stretching of the imagination to think, here, of Cathy and Heathcliff wandering among the moors in Brontë's Wuthering Heights. Also striking from this part of the exhibit is a watercolor by J.M.W. Turner, full of that artist's feeling for nature in her extreme moods. Not to be missed is a charcoal and graphite drawing by Honoré Daumier that -- eschewing the satirical overtones of his well-known illustrations -- depicts three spectators deeply engrossed in viewing art. Daumier barely sketches in the background, suggesting that, at this moment, only the work of art and the spectator exist. It's a fine summation in visual terms of what it feels like to be absorbed in an aesthetic experience.

The selection of 20th-century work brings the exhibit full circle. One notices that whereas the 15th- and 16th-century artists were interested in showing us a cosmic order, as the show progresses, one sees more and more how the art is about personal expression. Fra Bartolommeo's drawing, for instance, is not about Fra Bartolommeo. It's about nature and about community. Artists like Picasso and Miro, by contrast, were concerned with communicating an intensely personal vision of the world.

A word is in order about the catalogue that accompanies the exhibit. It's a triumph. Copiously illustrated, it also presents well-written text that consistently brings to light new and revealing aspects of these works. The catalogue reflects well on all concerned and deserves to be appreciated by the widest possible audience. That goes for the exhibit, too. Being choosy -- and not settling for second best -- has its rewards. The museum's superbly representative collection of drawings proves that.