Not sure what the faerie queen is singing about? We can help. 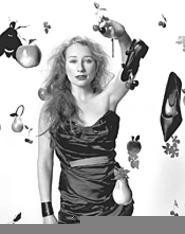 When she's in a certain mode, Tori Amos is empowered, furious, and lucid. Her 1992 solo debut, Little Earthquakes, draws blood, and even delicate songs like "Silent All These Years" leave bruises: "So you found a girl who thinks really deep thoughts/What's so amazing about really deep thoughts?/Boy, you best pray that I bleed real soon/How's that thought for you?" Ouch. Go look in the mirror, and you'll find Amos' knuckles tattooed on your forehead.

With her 1994 follow-up, Under the Pink, Amos permanently leaped ahead of the nascent Lilith Fair crowd. Everybody's favorite piano girl began her evolution into Generation X's Stevie Nicks, an alluring witchy woman steeped in arcane lore. But as Amos has evolved from cantina singer to faerie queen, it's become increasingly difficult to tell what in the blue hell she's talking about. Amos' crystalline lyrics and simple metaphors have long since given way to a more abstract approach, with talk of cornflake girls, satanic fathers, and ice cream assassins.

"I've studied different poets over the years, and Elizabeth Barrett Browning and Emily Dickinson and Sylvia Plath are very different, but they're all valid," she says, explaining her tendency to drift from starkly linear lyrics to impenetrable themes. "Some work with archetypes. Some are literal. And for me to be inspired as a songwriter, I need to take different approaches to five-, six-, seven-, eight-minute songs."

Amos takes just about every approach imaginable on her latest, The Beekeeper, an 80-minute, 19-song collection.

"The Beekeeper is about responding to an America that is overtly right-wing," she says. "And as a minister's daughter, I decided that I want to take people back to Jesus' teachings. I went to the Gnostic gospels and read the Gospel of Mary Magdalene, and it occurred to me that women have been subjugated. Mary Magdalene has been turned from a prophet into a prostitute. Jesus was probably the first feminist -- in Christianity, at least. I felt that people need to be armed with these seeds."

Talk about your deep thoughts. Recognizing Amos' recent fare as poetry, we offer the following interpretations of some of her more unfathomable originals.

Song: "The Power of Orange Knickers"
Album: The Beekeeper, 2005
Problematic lyric: "The power of orange knickers/Under my petticoat/The power of listening to what you don't want me to know/Can somebody tell me now who is this terrorist?"
Reader response: Singer-songwriter Damien Rice joins Tori for this languid duet, touting the power of carrot-colored underpants. The album's liner notes explain that Amos' husband is a fan of British soccer team Arsenal, which has a ruddy uniform. So the lyric can be read as a low-key fight song for their favorite footballers. Just don't look for it to replace Gary Glitter's hideous "Hey" anthem at Browns games anytime soon.

Song "Mr. Zebra"
Album: Boys for Pele, 1996
Problematic lyric: "Hello Mr. Zebra/Can I have your sweater/'Cause it's cold cold cold/In my hole hole hole /Ratatouille strychnine."
Reader response: What Adam Sandler is to men with a juvenile sense of humor, Amos is to smart women: She represents the audience at its best and worst. "Mr. Zebra" is a sly wink at Sandler's crowning achievement, Billy Madison. In the lowbrow 1995 comedy, a sloshed Sandler's senses betray him, and he sees a giant penguin. He then gives chase, 'cause "it's too damn hot for a penguin to be just walkin' around." Likewise, Amos has a history of seeing things and spouting nonsense. "Mr. Zebra" parallels Sandler's brush with Mr. Penguin: Amos sings about a black-and-white creature, in a quavering voice similar to the tone Sandler uses to speak gibberish. In a 1998 episode of VH1 Storytellers, Amos unsurprisingly explains that a hallucinogenic experience inspired her to write some of Pele, which also includes "Father Lucifer" -- a clear reference to Sandler's Little Nicky.

Song: "Bliss"
Album: To Venus and Back, 1999
Problematic lyric: "Father/I killed my monkey/I let it out to/Taste the sweet of spring/Wonder if I will wander out/Test my tether to/See if I'm still free of you."
Reader response: "Icicle," from 1994's Under the Pink, was an explicit ode to masturbation ("Gonna lay down/And when my hand touches myself/I can finally rest my head"). As Amos enjoys a brief foray into sensual electronica, the ecstatic "Bliss" less clearly revisits the themes of feminine identity, sexual independence, and spanking the monkey. It's not her first reference to primates. "Marianne," from Pele, features the baffling lines "The weasel squeaks faster than a seven-day week/I said Timmy and that purple monkey/Are all down at Bobby's house." We have no idea about that one.

Song: "Spark"
Album: From the Choirgirl Hotel, 1998
Problematic lyric: "Trusting my soul to the ice cream assassin/Here/Here/Here."
Reader response: The reference to ice cream could be a nod to classic poem "The Emperor of Ice Cream" by Wallace Stevens, who was often on the same warped wavelength as Amos. In "Man Carrying Thing," he responds to charges that his compositions defy interpretation, writing, "The poem must resist the intelligence/Almost successfully." Amos follows Stevens' advice on The Beekeeper, where she confusingly attempts to reconcile the conflicting feminine roles of mistress, wife, and mother. But given the song's bleak tone, it's quite possible that she's just dealing with a bad weekend by polishing off a quart of chocolate-chip cookie dough.