Nacho piles on the cheese and hopes you won't miss the meat. 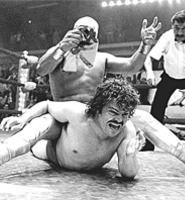 There is no movie more overrated in recent history than Napoleon Dynamite; it's to cinema what the Doors are to rock and roll, a thing blindly and inexplicably championed as though it were a religion above being blasphemed by nonbelievers. And every time someone tries to explain its appeal -- the deadpan comedy that plays like Bergman drama, the geek love that smells like self-loathing, the catch phrases that drop like rat pellets -- it just slips a little further from my grasp, though I might watch a movie entirely about Uncle Rico and his attempts to throw a football over them mountains. Even the nine-minute short from which it sprang was some seven minutes too long, suggesting that writer-director Jared Hess possesses a febrile mind unable to focus long enough on things like character or story -- in other words, the basics of moviemaking.

So it's some relief to announce that sitting through Nacho Libre, the latest from Hess (and co-writers Mike White and Jerusha Hess, Jared's wife), isn't an entirely unpleasant experience -- which is to say it doesn't feel as though it's worn out its welcome before the second reel. It takes slightly longer than that before its gears begin to slip, its jokes begin to wear, and its laughs begin to fade; it's only 30-45 minutes too long and therefore a marked improvement for a filmmaker who approached the medium with the attention deficit of a TV sketch-comedy writer promising a premise that can't withstand the elasticity of a feature. Or maybe a little Jack Black goes a long way.

Black, tenacious in tight pants of various shades, plays the titular Nacho, a kid raised in a Mexican orphanage, who dreams only of becoming a luchador, with a superhero's mask obscuring his round face in the wrestling ring. The entirety of the movie deals with his sneaking out of the orphanage, where he's a cook charged with doling out black-bean gruel topped with stale nacho remnants, to wrestle with a scrawny thief named Esqueleto (Héctor Jiménez). The love interest -- a nun named Sister Encarnación, played by Mexican soap-opera star Ana de la Reguera, who looks just like Paz Vega and Penelope Cruz -- also functions as Black's straight man. She delivers one of the movie's genuinely brilliant lines (it has to do with her favorite color).

And that, essentially, is the story, which means that, despite what the film's own publicity materials will tell you, Nacho doesn't wrestle to save the orphanage, but merely to satisfy a childhood craving for fame, glory, and the opportunity to grapple with masked men -- some the size of mountains made of muscle, some the size of rabid dogs out for blood. There's nothing at stake except Nacho's boundless ego, which means that the movie lives or dies by its performances and its gags. Fair enough: Nobody goes to see a movie from the maker of Napoleon Dynamite expecting proselytizing social realism, after all. But Nacho Libre has the cheap, faded feel of something utterly disposable and entirely forgettable -- like a movie made in the late 1970s or early '80s, dusted off and trotted out to make a little coin before going direct to home-video release.

One could easily mistake it for a parody of Rocky, down to its late-film appropriation of an iconic scene; it is to the Sly Stallone franchise what Top Secret! was to the spy-movie genre or Airplane! was to the disaster movie, a self-contained spoof in which every line's intended to elicit the giggle that propels the lumbering beast onward and upward. To that extent, Nacho Libre also recalls such dopey disposables as Meatballs (only without the emotional investment), The Jerk (without Steve Martin), and most of the better movies of Mel Brooks (without the film-history flashbacks). See it today and forget it tomorrow -- that's the mantra of Nacho Libre, which has some memorable lines (most delivered by its supporting players, chief among them the so-skinny-he's-almost-transparent Jiménez) that want to be catch phrases, if only they didn't slip from your grasp.

The entirety of the endeavor rests on the flabby shoulders of Black, who spends almost the entire film jiggling his shirtless frame across the widest of screens; he rivals Will Ferrell in his desire to use his man tits to elicit cheap titters. Black, rested from his restrained performance against the green screens of King Kong, bounces back like he's been released from detention in the School of Rock (also written by Mike White) and allowed to roam the empty hallways without supervision. Nacho Libre plays like a Jack Black best-of, down to the song he wrote and performs for de la Reguera, which sounds like some tejano version of a Tenacious D throwaway. And he's morphed into another J.B. -- John Belushi, who likewise acted with his eyebrows and bounced from side to side where most people merely walk forward. And where some might find his accent a tad offensive, it's so innocuous that it plays like the tomfoolery of a child who doesn't know any better. Nacho's an idiot, but otherwise he'd disappear completely -- like his movie, 20 minutes after you walk out of the theater.