Can superheroes and alternative comic authors really get along? 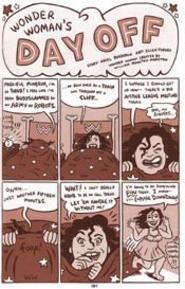 Originally, this was to be a story about how Stan Lee, the industry icon who ran Marvel Comics for decades and co-created Spider-Man and the Fantastic Four, wound up remaking archrival DC Comics' most venerable heroes in his own image. The 12-part miniseries, Just Imagine Stan Lee Creating, was set to debut July 5 with a book starring a black Batman named Wayne Washington, who turns to crime-fighting after being accused of a crime he didn't commit. DC announced the project more than a year ago, and in an industry always looking for media attention outside such publications as Wizard and The Comics Journal (porn for fanboys), Marvel's kingpin going to work for the hated DC was Big News. But the title has been held up for myriad reasons--creative slowdowns, financial issues with Lee's own legally troubled, bankrupt Web site, you name it--and the buzz, for now, smells like a bust.

But in its stead comes a DC comic book--actually, a $30 hardcover book--that's causing a far greater rumble throughout the industry than Lee's (forever?) forthcoming series ever could have imagined. For the first time in the medium's 68-year history, a venerable comic-book monolith has invited troublemakers from the wrong side of the tracks to play with, and even break in half, its precious toys. With Bizarro Comics--a 236-page anthology that offers a completely different take on Stan Lee's Just Imagine premise--DC has allowed some of the best-known and most obscure writers and illustrators from the alternative-cum-underground comics world free rein to revamp the company's best-known and most obscure heroes in their own image, more or less. What that means, for those of you who stopped cruising comic shops around the time you discovered real girls were better than Supergirl, is that people who hate heroes are now donning cape and cowl for a night out on the town, with DC footing the bill.

In a tale previously rejected by DC, Cowboy Wally Show author Kyle Baker imagines what becomes of an infant Superman's baby sitter; a few years ago, the company disapproved of a scene in which the tyke climbs into a microwave--it's all about context, one assumes. Ellen Forney, author of the Judy Bloom-obsessed autobiographical tale I Was Seven in '75, teams up with Ariel Bordeaux for two tales--one featuring Wonder Woman on her day off, as she attends a poetry slam; and another about two elementary-school girls, one of whom thinks she's Batgirl, who rescue dead bats from dissection. Artbabe Jessica Abel and Hicksville resident Dylan Horrocks take Supergirl and Mary Marvel out for a nice, quiet lunch. It's a book in which discarded sidekicks troll for work, Aquaman feuds with fish and winds up as bait, super-pets put the Man of Steel out of work, Batman and Robin fend off a rather unsuper-villain named The Eraser, Hawkman is the guardian of unhatched eggs, and Batman drowns his jealousy of Superman in a hot tub full of hot chicks.

Bizarro, so named for a silly villain who is Superman's total opposite, is a new Prada suit hanging in a closet full of polyester--the musty old emperor dressed in trendy togs as DC, like the rest of the comics industry, attempts to lure new comics readers without alienating the faithful. At its best, the book feels like a throwback to the old Mad magazines of the early 1950s, back when Harvey Kurtzman and the so-called usual gang of idiots poked loving fun at DC's icons: Superduperman, Bat Boy and Rubin, Captain Marbles and so forth.

But it's also a brave and bold move on DC's part to reconcile two disparate audiences that are rarely ever on speaking terms--the freaks who love their Green Lanterns and Martian Manhunters and the geeks who prefer their comic books meditative, black-and-white, tangible. (Those among us who fall into both camps prefer to be called "the beautiful people.")

"People who read superhero comics are imagining themselves being superheroes sorta, and people who read alternative comics are imagining that they could never be a superhero," says Sock Monkey creator Tony Millionaire, who illustrates a Batman tale with book designer Chip Kidd. Their contribution to Bizarro, a send-up of a 1940s Batman tale, is among the book's best stories: It's at once anachronistic and anarchistic, a playful jab at a Dark Knight who must stave off a giant gorilla with a...well, bananarang.

"There's no way they could ever be a superhero," Millionaire continues, "so that's why they're looking at these stare-at-your-navel, introspective alternative comics. That's why I like the Bizarro book: The superhero world is an entire world--they all seem to know each other--and looking at that world through another world is like looking at it through a weird, different pair of spectacles."

With rare exception, none of the 54 artists associated with the project has ever done a superhero comic. Their characters (usually themselves in thinly veiled autobiographies) live not in Metropolis or Gotham City, but in a very familiar here-and-now--a grimy, desolate place where people live paycheck to paycheck. Theirs are comics usually populated by the middle class, the lonely, the frustrated, the doomed--you and me, in other words.

At best, their love of superheroes is the product of vestigial nostalgia: They were weaned on Action Comics or Justice League of America, but long ago swapped their tights for torn jeans and capes for old Converse All-Stars. And then there's someone like Seattle-based cartoonist-writer Ellen Forney, who never read comics at all as a kid; DC editor Joey Cavalieri, who instigated the Bizarro project a year ago, had to send her a batch of Supergirl and Wonder Woman titles just to let her fill in estimable blanks. Millionaire briefly read comics in his early teens but preferred Conan the Barbarian tales to those featuring superheroes.

"When I was a kid, I flirted with reading superhero comics once or twice because some of my other friends read them, but I thought they were stupid," says Bob Fingerman. "The whole men-in-tights thing never worked for me." Fingerman contributes several stories to the collection, including one in which a chunky, pint-sized Wonder Woman foils a crime at the mall and another in which the lesser-known Metal Men heads to a disco for a night on the town. It's a far cry from his best-known work, Minimum Wage, Fingerman's profanity-rich, jizz-heavy book about a porn-strip cartoonist and his horny galpal.

But, in fact, very few of the Bizarro stories feel like indie comics: Superman isn't passing the bong to Batman as they moan about women and making rent, for instance, and Green Arrow isn't rolling around on a shabby futon with Black Canary and a vibrating quiver. After all, this is still DC Comics--an AOL-Time Warner company--and there are limits to how far one can go when messing with such profitable properties aimed primarily at children. In fact, Millionaire's Batman story originally had the Caped Crusader brandishing a gun--as he had in the hero's early days--until DC nixed the pistol and replaced it with a banana. And, originally, Forney and collaborator Ariel Bordeaux were going to make Batgirl a teen-age lesbian--"but that was when I was like, 'Oh, yeah, I'm not doing alternative comics. I'm working for DC in this Bizarro collection with their characters,'" Forney says, laughing. "I'm sure there are a lot of people in the business that wouldn't think that was really the greatest thing."

"We were obviously not given carte blanche," says Evan Dorkin, best known in indie circles for his books Milk & Cheese and the autobiographical Dork. Dorkin's the rare Bizarro contributor with mainstream credentials, having written for the Superman animated series and its companion comic book; he also wrote last year's World's Funnest for DC, a sort of precursor to Bizarro. "I just hope if people like the look of Bizarro, DC will kick off a humor series in this vein and let it be an artistic, stylistic challenge to come up with oddball stuff. I would rather read comics with the superheroes done in the style of Tony Millionaire. But I understand from a corporate view why they wouldn't want anyone yelling curse words or mainlining or having sex. Personally, I think they should say, 'What the hell, let's try it.'"

Maybe the funniest thing about the book is the fact nobody associated with it can answer the inevitable question: Just who the hell is it for? That very subject has become a hot topic of debate on a handful of comics-related message boards, where readers are polarized between those who find Bizarro "a fun...awfully nice treat" and others who insist it's "mediocre...flat and uninspired"--a sellout, in other words. These so-called fans are damning DC for myriad things: They hate the Matt Groening cover (it replaced an earlier one submitted by beloved-in-indie-circles Ghost World writer Dan Clowes); and they think $30 is too much to pay for a comic book (even though they'll spend as much on hardcover reprint collections). One irate poster on The Comics Journal's message board would have you believe it's all part of an elaborate "scam" on DC's part.

"My assumption would be--and I'm certainly wrong about everything--that mainstream fans would reject this because they don't want these T-shirt-and-sneaker-wearing alternative-rocker types messing with their icons and playing with their toys," Dorkin says. "And small-press people might not give a flying crap about the superhero aspect of it. I just don't know."

Cavalieri, as well he should, shrugs off the fans' conspiracy theories and complaints, insisting that the only reason he wanted to do the project was because he wanted to work with writers he loved from a distance. And, in fact, Bizarro is the world's finest commercial for these artists (as well as a rather nice corporate paycheck): The back of the book contains biographies of and bibliographies for all the contributors, so if you like one contributor's tale, you can rush out and collect them all. Cavalieri even insists he envisions Bizarro as a baby-step beginning: If the book is successful, it could very well allow DC to launch a series in which alternative cartoonists tackle various heroes on a monthly basis.

"I suspect it would be asking too much to credit this project with being a watershed moment," he says, "but there is going to be a next step, and I'd like to be the person to take it there. I think that a mainstream publisher should embrace the alternative scene. Let's face it: These guys are the future of comics. Hopefully, this will not just open the door to other projects, but blast the hinges off."