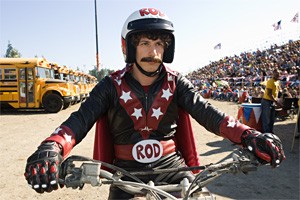 Hot Rod (Paramount)
Andy Samberg, best known for stuffing his dick in a box on Saturday Night Live, is Rod Kimble, a wannabe stuntman with very little "man" in him. He lives with his mom (Sissy Spacek, not kidding) and a stepdad (Ian McShane), who needs a new heart at a "conveniently priced $50,000," which Rod wants to raise just so he can beat the old man to death after the surgery. Funnier than it shoulda been, Hot Rod aspires to be nothing more than an early '80s underdog upper — Footloose populated by a punch-dancing moron and his nearly retarded pals. Its best moments occur in the margins — Chris Parnell's desperate attempt to gain AM radio the respect it deserves is as funny as anything. Same for the outtakes, which don't last long enough. Who knew? A cult classic-in-waiting. — Robert Wilonsky

Waitress (Fox)
Keri Russell was pregnant while promoting Waitress at Sundance in January and had to speak in interview after interview about the writer, director, and co-star, Adrienne Shelly, who was murdered one year ago. The disc, whose bonuses include myriad tributes to Shelly, aches with her loss. After all, we're reminded, the movie — in which Russell stars as a pie-maker, pregnant with an unwanted child — was intended as a love letter to her own young daughter, who appears in the closing shot. But for all its retrospective pain, Waitress is also a fitting tribute to the filmmaker: It's joyous, romantic, soulful, whimsical, charming, and smart — Shelly, to the very end. And it contains a handful of revelatory performances, from Russell, Nathan Fillion, Cheryl Hines, and, yes, Shelly — in front of and behind a camera that will miss her. — Wilonsky

Futurama: Bender's Big Score (Fox)
Matt Groening's other Fox cartoon started off as weird as The Simpsons eventually became, and it was canceled a few years back after languishing as a cult hit. But those cults spend money and write letters, so now it's back. Like the Family Guy movie, there isn't much more here than what's in three episodes of the show strung together (and, yup, the movie will be chopped up and aired as stand-alone episodes). Still, geeks will be delighted. The time-travel plot offers some big laughs, not least from a thinly veiled attack on the Fox network in which executives are murdered, ground into powder, and sprinkled on itchy genitals as needed. The bonus episode of Everybody Loves Hypnotoad is worth watching for the jokes, slipped into 20 minutes of a cartoon amphibian staring at you. — Jordan Harper

The Namesake (Fox)
In between filling his résumé with throwaways and knockoffs (Van Wilder, Harold and Kumar, the embarrassing Epic Movie), Kal Penn made his straight-faced debut in Mira Nair's lush, stirring adaptation of Jhumpa Lahiri's beloved novel about the fragility of family bonds and the ease with which immigrants abandon their heritage for the sake of "fitting in." Penn, aging with grace as the film slowly moves from the 1970s to the present day, is Gogol Ganguli, the son of Bengali parents, who initially rejects his folks' old lives. His mother (Tabu, stunning) and father (Irrfan Khan, quietly compelling) more than tolerate Gogol and his sister's rebellion — they understand it. Which doesn't mean they like it. Fact is, The Namesake could be about any parent-child relationship: the ups, downs, and heartbreaking in-betweens that make the whole clan a little better, if we're paying attention. — Wilonsky