Two brothers' tribute to their father is well intentioned if not always well executed. 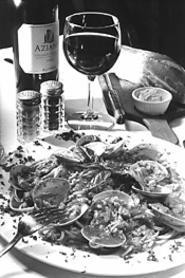 Cozy little Arthur's, with its white tablecloths, friendly staff, and moderate prices, is the kind of place a diner wants to love. Even from the outside, the crisply maintained building gives off neat and tidy vibes, from its dark green awnings and tiny wrought-iron-enclosed patio, to the strands of twinkling lights encircling the doorway. Once inside, it's the rare guest who won't feel embraced by the serene decor. Walls are painted in soothing shades of deep green and caramel, a burnished wooden floor glows underfoot, and tasteful landscapes and nature prints provide the artwork.

A partial wall divides the main room into two small spaces. On the left is the bar, not much bigger than a hankie, but oozing a sort of vintage charm. On the right is the 10-table dining room, with oil lamps, ceiling fans, and well-padded church pews for seating. Especially considering the limited square footage, one would have to say the tables are well spaced. Still, when the room is full, as it was on a Saturday night, eavesdropping can scarcely be avoided, and we would be remiss not to mention that we learned more about our neighbor's sister's operation than we ever wanted to know.

The menu, too, is appealing, filled with lovely, lyrical phrases like "lobster bisque," "rack of lamb," and "veal saltimbocca." Most entrées come with a house salad and a choice of wild rice, linguine, or potato; some also include a side dish, selected from among out-of-the-ordinary options like cold peas in horseradish sauce, red cabbage, or sautéed portobello mushrooms. And the kitchen gets diners off to a great start with a complimentary amuse bouche of crisp, golden crostini served with housemade black olive tapenade, whispering of capers, garlic, and anchovy.

The story behind the restaurant, now a little more than one year old, also charms. Two brothers, Dave and Jim Phillips -- the first a former property manager and part-time cook, the second a retired BP executive -- spent more than a year rehabbing an old tavern on the corner of Lorain Road and West 223rd Street, in pursuit of a vision. After investing what amounted to thousands of dollars in sweat equity, they developed a menu, christened their new venture in honor of their deceased father, and threw open the doors. Dave Phillips now serves as executive chef, while Jim Phillips handles the books.

Put all these details together, and it's enough to make a diner squirm in happy anticipation. Yet, just as one settles in for a first-class evening of top-notch food, something weird is apt to show up on the plate, like the spoiled greens we found tucked into our house salad during one evening's visit.

Unfortunately, this was just the beginning of meals that often fell short of expectations, in terms of both preparation and presentation. Take our second salad encounter as an example. For an additional two-dollar charge, a companion "upgraded" her house salad to a special Elza Salad, with "fresh pear, toasted walnuts, feta cheese, and a rice wine vinaigrette." Once it arrived, though, she wondered why she'd bothered: Of the three small pear slices, one was mushy and brown; if the walnuts, in fact, were toasted, it was indiscernible; and the bland rice wine vinaigrette was too puny to meld the components into any sort of flavorful union.

Then there was the duck. Who knew that boneless, unsliced duck breast looks just like a kidney? (Our less anatomically minded companion likened it to something from Fear Factor: "Argh! No, please! I can't eat that!" she giggled, as I prepared to slice into the plump, ovoid lump.) As it turned out, the odd appearance was only part of the problem: The duck also had been deluged with thick, sweet, and wildly salty Grand Marnier sauce, turning what still could have been a good-tasting dish into an off-kilter trial. And even though I was relatively certain it was just the power of suggestion, I couldn't entirely shake the notion that the duck's texture was spongy, like organ meat.

It just goes to show that we do, indeed, eat first with our eyes -- a reality that makes us wish the kitchen would pay more attention to appearances. Entrées of veal piccata and pork chops, for instance, arrived huddled in the center of large white platters, like abandoned orphans, with minimal garnishes and no side dishes for companionship. Instead, accompaniments like creamed spinach (frothy but dully seasoned) or linguine (served either with a good, chunky marinara sauce or a so-so Alfredo sauce) were presented cafeteria-style, in little bowls or on separate small plates. Similarly, although the tapenade and the butter for the crusty Orlando bread were served in cunning ramekins, coffee cream was simply tossed onto the table in dreary plastic tubs. "Perhaps," a fellow diner speculated while fussing with the bits of trash, "they spent so much on ramekins that they can't afford any pitchers."

Of course, if the taste of the food had wowed us, we probably would have been more tolerant of the lack of visual pizzazz. But the kitchen sometimes faltered in that arena, too. The pork chops, for instance, were big, tender, and done as ordered to medium rare, but beneath the thyme-and-apple sauce that coated them, their own taste was thin and watery. Panko-crusted shrimp cakes were brown and handsome, with plenty of shrimp and no filler, but the primary seasoning seemed to be salt, and beyond that, the flavor was muted. And once the impact of the wine-lemon-and-caper sauce faded, what remained of our veal piccata seemed flat and dry.

However, we did find a few bright spots among the starters. An appetizer of crispy ravioli -- three deep-fried pasta pockets filled with a zesty blend of chorizo, andouille, and Italian sausage, and slathered in that fine marinara sauce -- was a sprightly wake-up call for the senses. Sautéed wedges of portobello mushrooms, seasoned with herbs and white wine, were lush and earthy. And creamy lobster bisque, with a hint of sherry, was good, even if the little crumbs of seafood were a tad mealy.

Two simple homemade desserts (among a handful of commercially prepared ones) also won thumbs up from the diners at our table. The first (which our server called sabayon, but which was really more like a trifle) combined fresh berries, vanilla pudding, and cubed pound cake with a swig of Cointreau, to good effect. The second -- three glistening balls of vanilla ice cream, topped with a heady orange-and-bourbon sauce and a sprinkling of sautéed walnuts -- was rich and bracing, as well as being large enough to share.

Arthur's other asset is its service staff, formally attired in black trousers, white shirts, and bow ties, and relentlessly polite, friendly, and eager to please. For instance, when one night's glass of Merlot turned out to be oxidized, with a vinegary nose and an off flavor, the bartender popped the cork on a new bottle and our waitress replaced the drink without question. When we were the last diners in the place on a Wednesday night, our server continued to treat us graciously, neither rushing us nor ignoring us. And when we had questions, they were answered honestly and knowledgeably.

So certainly, the foundation for a good restaurant is in place here. If only the Phillips brothers would consider bringing in a professional executive chef to spiff up the preparation and presentation, Arthur's could build on its strengths. Until then, we may love Arthur's in our heart, but we'll take our taste buds elsewhere.