The Browns are rounding into form; the tailgaters are already there. 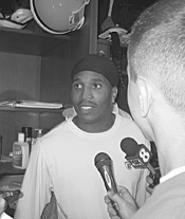 To most people, Flats parking lots are where you dump your car and go party. To Pat Murphy and 50 of his closest friends, they are the party. Prior to the Browns' preseason home opener against the Green Bay Packers Friday, Murphy and his Sherwin-Williams co-workers will break in the grill with burgers, bratwurst, steak, and lobster tails. It isn't private, either: If you're a Browns fan, you're welcome to join in. "Sometimes, people have come up and said, 'Hey, you guys got a cool setup,'" Murphy says. "And we say, 'You wanna beer?'"

Yeah, yeah -- Mayor Campbell put a stop to tailgate drinking last year. But Murphy knows how to tiptoe around the law: If the cops can't see what's in your cup, they won't haul you off to jail. "Don't flaunt [the beer]," he advises. "If you're not doing anything stupid, they'll leave you alone."

The Sunday partying typically starts at 8 a.m. But for Friday's evening exhibition, they'll replace their suits with Browns sweatshirts and get started right after work. "If this were a regular-season game, we'd take the whole day off," he says. The game starts at 8 p.m. at Browns Stadium, 1085 West Third Street. Tickets range from $32 to $73, available by calling 216-241-5555. -- Cris Glaser

The Noise of Summer
Nature gets loud at the Summer Canoe Float.

Ah, the chirping of crickets. The croaking of frogs. The gurgling of fish. They're a natural byproduct of the season, and they're part of the Cleveland Metroparks' Sights and Sounds of Summer Nights Canoe Float. And while your ears will get a workout as you paddle the waters of Hinckley Lake, your eyes are in for a treat, too: Bats, beavers, and other things that start with B call the lake home. Added bonus: Mars is at its brightest right now, so be sure to look up. The Float takes place from 8 to 10:30 p.m. Friday at the Hinckley Lake Boathouse (on West Drive, between Bellus and State roads at Hinckley Reservation in Hinckley Township). Admission is $15 per person, and preregistration is required; call 216-341-1704. -- Michael Gallucci