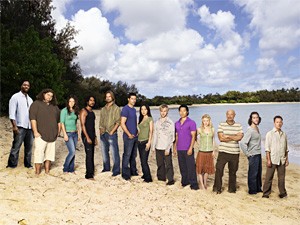 Pumping us up for the fourth-season premiere of our favorite TV show in a few weeks, this seven-DVD set includes all 23 episodes from last year's narrative-scrambling run. Bonus material — more than six hours of it — includes deleted scenes, a production documentary, and an in-depth look at the kid-snatching, super-creepy Others.

VIDEO GAME — Mass Effect (Microsoft)
Pop-culture fanatic Seth Green (who's starred in everything from Buffy the Vampire Slayer to the Austin Powers movies) lends his voice to this tricked-out space odyssey, which takes place in a galaxy far, far away. Combining RPG storytelling and laser-blasting action, this multilayered game (for the Xbox 360) lets players choose which direction the cosmos-hopping hero takes on his way to kicking alien ass.

DVD — Blade Runner: The Final Cut (Warner)
There have been a gazillion different versions of this sci-fi classic since its 1982 debut: the director's cut, the theatrical cut, the director's theatrical cut. Supposedly, this is the last word on the subject. We hope so, because the flick's never gonna look or play any better than it does on this two-disc special edition (which is also available in four- and five-disc sets). Besides, the feature-length documentary is one of the best we've ever seen.

DVD-ROM — Rolling Stone Cover to Cover: The First 40 Years (Bondi Digital)
This terrific box set (four DVD-ROMs and a book) includes every issue of Rolling Stone magazine — from 1967 through May 2007. Everything is here: the famous interviews, Hunter S. Thompson's drug-fueled prose, wall-worthy photographs . . . even the original ads. Best of all, you can search the DVDs for a specific review, feature, or news item without accidentally bumping into a Marilyn Manson cover.

TV — The Wire (HBO)
One of television's all-time-greatest cop shows launches its fifth and final season at 9 p.m. on Sunday. And things look bleak for the folks in Baltimore. Officers aren't getting paid, the local paper is also having money problems, and the mayor is reeling from trying to please way too many people. Plus, Fatface Rick and the other drug dealers hold a powwow to carve out territories. We'll miss this show when it's gone.

COURTESY FLUSH, PLEASE — Kane & Lynch: Dead Men (Eidos)
This video game's premise isn't a bad one: A vengeful mercenary and a drugged-up psychopath join forces after they break out of jail. Their crime spree (for the Xbox 360, PlayStation 3, and PC) includes murders, robberies . . . and more murders. But the story, characters, and repetitive game play go nowhere. Plus, it's really hard to invest too much in a game when its two leads are such despicable jerk-offs.