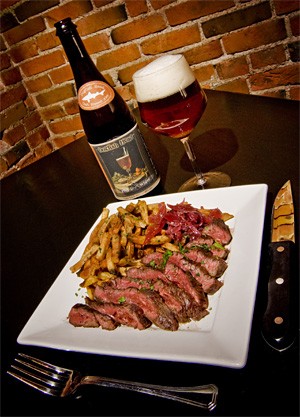 Fire. The wheel. The Lindemans Framboise Lambic float. All proof that genius resides in the simplest notions.

Take that last one: Islands of creamy vanilla-bean ice cream, bobbing cheerfully on a sparkly pink sea of raspberry beer, yielding a "best of both worlds" indulgence worthy of any pastry chef in town. It's beer! It's ice cream! What's not to love? And while the folks at the Tremont Tap House may not have invented it, let's give 'em props, like Prometheus, for bringing it to the masses.

Words like "tap house" and "yummy desserts" don't often appear on the same page. Then again, you could make the argument that the Tap House is far more "gastropub" than "tavern." As proof, consider the impressive craft-beer selection — 28 options on tap and 40 more in bottles — enumerated on a long, annotated menu, along with style notes, ABV, and prices. Not only will you search in vain for Pabst or Bud, but even trendy quaffs like Blue Moon, Stella Artois, and Hoegaarden are notable only by their absence. (Also absent, incidentally, is a wine list: So far, the Tap House hasn't snagged the proper license.)

Together with the lovingly renovated surroundings — a brick Italianate, dating back to the 1890s, now tastefully spruced up with new paint, a poured-concrete bartop, and gleaming oak floors — that exclusive beer list sets the tone of casual sophistication. Owners Chris Lieb and Jason Workman spent nearly two years and $350,000 transforming this former blue-collar bar into a hip watering hole; among other enhancements, an enclosed concrete patio should be a crowd-pleaser, now that the teak furniture has finally arrived.

The real proof, though, is in executive chef Joshua Montague's mouthwatering menu, a contemporary-American roundup of imaginative starters, ample salads, out-of-the-ordinary sandwiches, savory burgers, and surprisingly ambitious mains, which range from ale-braised short ribs, duck breast, and seared sea scallops to a contemporary riff on chicken paprikash that features free-range poultry and haricots verts. Along with a starter of pierogi, the paprikash serves as sly homage to the tavern's historic niche.

One caveat: Pacing can be slow. On two visits, the lag between apps and entrées was nearly 30 minutes, an irritation that was only compounded by the fact that some of the mains arrived cold. And while we're kvetching, service also could be more professional. Friendly and well-intentioned are good qualities in a server; attentive, proactive, and efficient would be even better.

By and large, though, Montague's moderately priced food is worth waiting for. That's particularly true of the rosy-rare hanger steak — beefy, tender, but properly chewy and smartly sided with luscious, homemade onion "jam" — and the short-rib sliders, slathered with barbecue-boosted braising sauce and topped with crunchy Asian slaw.

As we'd expect from a Culinary Institute of America grad who's worked at both Parallax and Table 45, Montague is a skilled flavor-booster — handy with salt and pepper, and liberal in his use of high-test ingredients like nuts, cheeses, herbs, and bacon. Most of his creations are flush with lip-smacking umami. That includes an almost evaporative duo of blackened scallops, judiciously goosed with a tongue-tickling sauce of blue cheese and chopped walnuts. Similarly sassy is the double-fisted mushroom burger, eight ounces of Certified Angus Beef, generously topped with velvety slabs of sautéed portobello, lean bacon, and smoked cheddar cheese. Even slightly overdone, it remained juicy and rich.

A saucy toss of penne, rosemary, and brie-boosted béchamel was well-conceived, although a bigger burst of cheesiness wouldn't have been amiss. Likewise, a portobello pizza on a freshly made crust somehow failed to pop.

And don't overlook the first-rate sandwiches, including a jaw-breaking stackup of freshly roasted turkey breast, smoked ham, brie, and cranberry sauce, on thick slabs of raisin-walnut bread from Zoss the Swiss Baker. On the side, either the fresh-cut fries or the buttery mashed spuds make fitting partners. (Zoss also bakes the tavern's exemplary soft pretzels, which the kitchen partners with its own savory spreads.)

For dessert, Montague makes a plush, French-toasty version of challah bread pudding, topped with slowly melting snowballs of pecan-praline ice cream from Mitchell's. But for our dollars, there's nothing like that Framboise Float, a miraculous melding of fruit, fizz, and vanilla-spiked creaminess that makes your run-of-the-mill root-beer types taste like kids' stuff.

Maybe it's not rocket science, but when it comes to sweet endings, it rocks.