The eerie world of The Illusionist delivers plenty of both. 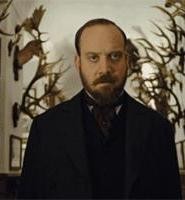 If, at this remove, we can imagine Vienna in the late 1890s, we behold a great imperial capital in ferment. Gustav Mahler is not only reinventing the harmonic structure of serious music, he is getting his head seriously shrunk by Sigmund Freud. Arnold Schoenberg takes painting lessons from the eroticist Richard Gerstl (who will later bed the composer's wife), and new schools of thought are quickly multiplying in the coffeehouses. Vienna is the cradle of modernist architecture, psychoanalysis, and twelve-tone music, but it has also given rise to an ominous new strain of anti-Semitism. The old order is changing; the catastrophe of World War I looms on the political horizon.

There could be no more apt setting for The Illusionist, Neil Burger's eerie and sumptuous melodrama in which a gifted stage magician known as Eisenheim (played by Edward Norton, who always gives off a vaguely mysterious vibe) does more than perform fancy tricks: He provokes real wonder, while embodying the ambiguities and uncertainties of a new century.

The film never mentions the likes of Freud or Mahler, but it doesn't have to. Working from a short story by Pulitzer Prize-winner Steven Millhauser, Burger (Interview With the Assassin) and cinematographer Dick Pope cast a spell, in muted gold and green, over the city (actually Prague, standing in for Vienna), and the ostensibly conventional plot eventually reveals its underlying meditations on the seductiveness of power and the power of magic. With his pointed beard and an accent straight out of Mitteleuropa, Norton is just right -- a living, breathing enigma throughout. An adventurous score by Philip Glass enriches the dark mood, as do the admirable contributions of costume designer Ngila Dickson and production designer Ondrej Nekvasil.

Despite their slightly musty air, the dramatis personae come vividly to life. The son of a cabinetmaker, Eduard Abramowitz has reinvented himself as Eisenheim, and in his 20s begins to dazzle audiences with grand illusions -- causing an orange tree to sprout, fully grown, from a big flowerpot, slowing the flight of falling red balls, returning a borrowed handkerchief to the stage on the wings of two silver butterflies. Is this simply sleight-of-hand from a gifted con man? Or is Eisenheim tampering with the laws of nature? Those asking such questions include a beautiful duchess, Sophie von Teschen (Jessica Biel), whom Eisenheim has known since childhood; the imperious and severely mustachioed Crown Prince Leopold (Rufus Sewell), who's plotting against his own father as he plots to marry Sophie; and a skeptical police inspector, Uhl (Paul Giamatti), who serves as our narrator and guide to the proceedings while undergoing a pivotal crisis of conscience himself. By turns witty and tart, Uhl may be the film's most inviting character, even if he's only an amateur magician in his own right.

These resolutely old-fashioned elements might not work at all in a less well-crafted movie. But this entertaining tale of wizardry and lost love vaporizes even our most serious doubts. When the crafty Eisenheim humiliates the strutting prince with an improvised sword-in-the-stone illusion, we are delighted at the sight of arrogance unmasked; when, plunged into grief, Eisenheim spookily summons the restless spirits of the dead to a darkened theater, we are as amazed as his own top-hatted audience, which is quickly growing into a kind of spiritualist cult.

We have good cause to scratch our heads. Unaided by computer effects, the tricks we see here are all "real" -- or as real as magic gets -- thanks to technical consultant Ricky Jay, one of the world's most accomplished sleight-of-hand performers and a magic historian of such perfectionist bent that these illusions are all period-accurate to the last detail. When Orson Welles cut Marlene Dietrich in half in Follow the Boys, movie audiences probably grinned and winked; when a campy Vincent Price started killing off famous tricksters in The Mad Magician, schlocky 3-D was the lure. But in the startling moment that Sophie's beautiful ghost materializes from a gray mist in The Illusionist, we can't help musing about supernatural powers. And the nature of the mind. This is Freud's city, after all, fraught with obsession and deep-rooted sexual dynamics.

In the end, Burger and Millhauser provide a "solution" to the film's central mystery that may strike some viewers as prosaic, but doesn't much compromise the overall effect. Beautifully acted and handsomely mounted, this gorgeous period piece is an intelligent and intriguing exploration of "the dark arts" -- less dependent on mere hocus-pocus than on the convincing journey of the soul undertaken by its hero.