After three decades of doing it their way, the free spirits of Los Lobos continue to deliver. 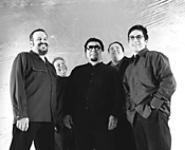 Though it'll never be considered classic rock, the wild, uninhibited sounds of East L.A.'s Los Lobos are most certainly classic: rock and roll, blues-rock, and vernacular, acoustic Mexican music played like no other. They've been doing it for nearly 30 years now, and though they're not confident in today's record business, their product grows ever richer, they do good business around the world, and they show few signs of slowing down anytime soon.

Adds Berlin: "You're never going to get the same show twice. Nothing is sequenced or looped. We bring something unavailable anywhere else. I'd like to think there's a place in the culture for that."

Indeed, the band's sold-out gig at the Beachland this Saturday attests to the fact that there's definitely still a place for this group and its latest, characteristically strong offering, Good Morning Aztlán. Amazingly, Los Lobos haven't put out a bad album since they began recording commercially in 1984. The original Mexican American band, Los Lobos play a repertoire that spans everything from crunchy Anglo rock to the sweetest Mexican ballads. Unfortunately, that same addictive versatility has prevented Los Lobos from ever gaining much airplay -- which might explain why the band's biggest hit, a remake of Ritchie Valens's "La Bamba," is a creative albatross, despite its commercial power.

Nevertheless, Los Lobos have persevered for close to three decades. The group turned professional in 1973, earning $50 for performing at an afternoon fund-raiser in the Los Angeles suburb of Florence. The breakthrough came in 1980, when they won over a nasty punk crowd at the Olympic Auditorium in downtown L.A., opening for John Lydon's Public Image Ltd. Four years later, Los Lobos -- Berlin on sax, along with guitarist-vocalists David Hidalgo, Cesar Rosas, and Louie Perez, and bassist Conrad Lozano -- signed to Slash, a designer-punk arm of Warner Bros. They won the first Grammy ever awarded for best Mexican American performance in 1984, taking home a statuette for "Anselma" off the great EP ". . . And a Time to Dance."

Four superb albums followed -- not counting the so-so La Bamba soundtrack -- culminating in the group's 1992 effort Kiko, a work of audio alchemy that blends dreaminess and drive to mesmerizing effect, and remains one of the finest recordings ever to come out of this country. Through it all, though, the band's lack of adherence to any one musical style made Los Lobos difficult to categorize -- and made it impossible for them to settle into any kind of lucrative niche. Finally, in 1999, Los Lobos left Warner Bros., dissatisfied with the way the label was promoting their records. The group was quickly snapped up by Disney's Hollywood Records, which released an album called This Time that same year.

"One of the issues with Warner was that it was such a battle to get to do the other things we do, like soundtracks and kids' records," Berlin says. "Whatever we wanted to do ended up costing us more in lawyers' fees than we'd get paid at the end of the day. It's hard for us to see a negative impact when we do these outside projects. It enhances the brand." (Side projects include groups such as the Latin Playboys, Houndog, and Los Super Seven; an album for children; and the soundtrack for Spy Kids. In addition, Berlin does production work, and Rosas has released a solo album.)

After a stint on Hollywood, Los Lobos shifted to Mammoth, a Hollywood subsidiary that catered to slightly more adult tastes (whereas Hollywood was all about boy bands, Mammoth's leading act was the Squirrel Nut Zippers). But Mammoth folded last year, and now Los Lobos is back on Hollywood.

Though he won't go into detail, Berlin suggests that Hollywood itself is on the ropes -- as is much of the rest of the record industry, which, he believes, has only itself to blame. Berlin says the record industry should encourage, not squash, companies such as Napster. "To destroy radio and downloading and all the other things they're afraid of is ridiculous," he fumes. "It's no way to run anything, no way to solve a business laden with problems.

"Napster -- still -- to my mind, was the best file-sharing program," he continues. "[The record industry] can't figure out how to do anything. To try to blame the people they're blaming is just fatuous. In my opinion, file-sharing creates an opportunity. The future is obvious to everybody except the people in control."

So Berlin and his bandmates have begun to take more control of their own future, selling much of their merchandise on their own website (loslobos.org) and patiently waiting for the industry to come back to Earth.

"It's not permanent, it's a situation in flux," Berlin asserts. "The next thing will be a lot more artist-friendly than the sort of relationship that has existed to this point. It's very medieval. You tithe back to your lord and master some 80 percent of your income, in exchange for an occasional hearty handclasp and a little bit of income. These days, you cannot have a surprise, out-of-left-field hit record. To go more than once around the block costs millions in promotions and payoffs and payola."

Still, there's hope. Jam bands are doing well, and Los Lobos plays to substantial crowds. Last summer's European tour, with Los Angeles group Quetzal opening, sold out every date. "It was great," Berlin says. "People seemed to be genuinely into what we were doing. We're hoping that this tour, where we come to your town, is similar.

"We're going to keep plugging, regardless," he goes on. "If we went into our cave and waited out whatever this situation is, and hoped it came back to whatever it was in the '70s and '80s, we could be waiting for a long time."