The Flat Can Co. embodies the workingman's bohemia. 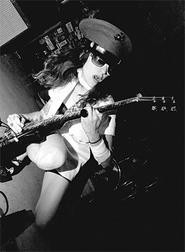 In the late '70s and early '80s, most punks from the East and West Coasts agreed with their counterparts in the U.K.: Punk was a rejection of classic rock. Ramones vs. Aerosmith. But L.A.'s Black Flag screamed Fuck that! They dug the Sex Pistols and the James Gang. They worshiped all loud rock, regardless of hair length and fashion. If it rocked, it rocked -- plain and simple.

Black Flag should've hailed from Ohio, Michigan, or (gulp) Indiana, because their philosophy is a long-standing tradition among midwestern punks. Many of the best underground bands in Cleveland grounded themselves in a fusion of avant-garde weirdness and gritty, Friday-night bar rock. Rocket From the Tombs looked to Pere Ubu's new-wave futurism while nicking riffs from boogie monsters like Humble Pie. Cobra Verde concocts grand allusions to obscure European cinema, but grooves as if they're a bunch of surly drunks working third shift at the Dickey-Grabler Company.

Here, in middle America, there's nothing wrong with sucking down PBRs, cranking Double Live Gonzo!, and reading the 1924 Surrealist Manfesto -- all at the same time, mind you. You can dig high art and not have to abandon your working-class roots in the name of all that's hip in downtown Manhattan. That's a cool thing.

The Cleveland band that currently embodies this unique freedom is the Flat Can Co. Even the name sounds as if it was ripped from one of the decaying billboards painted on the sides of countless brick warehouses and machine shops in the Flats. But it wasn't, says drummer Scott Pickering while sipping suds with the rest of the band at Ohio City's ABC Tavern. He then points silently to the fanny of guitarist Miss Melvis, who stands at the bar with her back to us, waiting for her cocktail. When I "get it," bassist Jim Donadio and Scott's brother, guitarist Keith Pickering, start giggling like school-kids.

To talk to these four scene veterans is to be plunged into a muddy 30-year history of local indie rock. And there's no throwing me a life vest. With Scott gesticulating wildly, like a jive-talking, coked-up DJ from the last days of disco, former bands and long-forgotten side projects are rattled off out of order and without any context: Speaker/Cranker, the Getdown Airwaves, Chump, My Dad Is Dead, Prisonshake, Spike in Vein, Rainy Day Saints, and even the enigmatic Supie T, a true C-Town institution.

Although it's impossible to sort through this wonderful mess, the main theme pops up over and over. These four have never bought into the punk vs. classic-rock myth. In high school, sometime in the early '80s, I believe (Scott doesn't clarify), the Pickering brothers were wailing metal dudes, whose bands played punk shows. They were influenced by the legendary Pagans and Chicken Shack, a bombastic blues-rock outfit from the hippie era. Miss Melvis, meanwhile, has become a local guitar goddess, renowned for wrestling searing atonal noise from her six-string as if she is a cross between Sonic Youth's Thurston Moore, free-jazz freak Sonny Sharrock, and no-wave idol Rudolph Grey. But here's the kicker: She doesn't listen to experimental guitar. She's a Cleveland bar rocker through and through.

Live, the Flat Can is something of a throwback to the late '80s/early '90s, when the Midwest underground ruled the indie scene with redneck punks like Halo of Flies, the mighty Cows, and the acid-fried Butthole Surfers. The six-foot Miss Melvis even resembles a Butthole, wearing a naughty nurse's outfit -- or sometimes even less -- while rolling across the floor straddling her axe. It's a true performance-art spectacle, even more so because Donadio and the Pickering brothers are so n-o-r-m-a-l-looking. Sporting all black (and not hip all black), these dudes resemble professional movers, not indie musicians.

But the utilitarian threads make perfect sense. Beneath the group's industrial-strength feedback, artsy use of extended improvising, and raging psychedelia lurks a beer-guzzling workingman's rock. Sure, it makes the head swim, but it also makes the ass shake. And that's what Cleveland has always been about.