Locals lace up, roll out, and groove on. 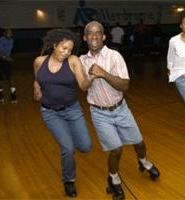 Meet me in the club, it's goin' down.

A line of ladies with updos and fat hoop earrings leans back in unison, dropping their booties to the beat.

Time to flip the work, make the block bump.

A centipede-like train of three guys, all skating backwards, stops dead in the center of the rink. Their leader, 21-year-old Dontay McGhee, hollers a command, and the skaters begin to kick out a fraternity-style step, twirling sweat rags over their heads, oblivious to the bodies zigzagging around them.

As McGhee takes a break by the rental booth, he explains how he got into skating, just two years ago. "I wanted to do something different," he says. "Everybody [does] basketball and all that, but skating -- it's a whole different atmosphere. We want to bring it back."

So McGhee and a few friends started going to roller rinks and taking pointers from members of the older generation, who were still getting their skate on to old-school R&B, funk, and disco.

McGhee's first lesson was simple: "You gotta learn how to fall with style," he says. "I busted myself up good when I first started."

McGhee illustrates "falling in style" by eating it during a twirl on his tiptoes, then pausing to point at uneven floorboards in the rink. "The floor's all bumpy and sweaty!" he shouts through a wide grin.

Lesson No. 2: "You gotta learn how to skate backwards," he says, showing that it's more complicated than it sounds, due to a signature ankle roll that gives this type of skating its style.

But there is one prerequisite: "You got to have rhythm," says 17-year-old Shamontay Peacock, a member of McGhee's crew. "If you got rhythm, you can skate. If you don't, well, I don't know."

McGhee and his crew call themselves "Soul Train." It may seem odd that young Turks would embrace an old-school name; McGhee explains that it's their way of paying homage. "We didn't invent nothin' new," he says. "This was here before we came, and it'll be here after we're gone."

Thirty-four-year-old Charles Fleming has been a regular at rinks around the area for years. "[Skating] has always been big," he says. "You just gotta know where to go." And he says the apex of the scene is the Rollerdrome in Cleveland.

At around 10:30 on a recent Thursday night, Fleming scopes out the rink. As some skaters glide backward while break-dancing, other couples spin through their path -- miraculously, there isn't one collision the whole night.

"Everybody knows what each person's gonna be doing," Fleming explains. "Like, they know I'm gonna be spinning, so they watch out."

Most of the rollers at Rollerdrome are well over 21, including 84-year-old Bill Clayton, a retired railroad worker who started skating with his grandkids in the '90s. "They're all raising families now, and I'm still skating," he says. "I just love being with the people. That's why I'm still at it."

Most of those present are regulars, who have been loyal Rollerdrome customers for the past decade. They're the kind of crowd that prefers "Good Times" to "In da Club," and to them McGhee owes his skate skills.

People skate in long, fast trains, their bodies mere centimeters away from crashing into each other. A few sit in the middle, infusing old-school break-dancing moves into slow, synchronized dances. The best skate on the outermost ring, their paths tangled together like strands of invisible spaghetti. They lock arms in groups of three, twirling like human tilt-a-whirls.

"This is the most loyal skating crowd I've ever seen," says Keith Broda, who's owned the rink for 11 years and worked there for 32. If it weren't for this crowd, he'd have closed his rink long ago. "Skating used to be popular in the disco days and then with white kids, like 10 to 14, in the '80s, but then we started losing even the young skaters," he says. "It's the African American skaters who come here year-round and keep us alive. "

One of those loyalists is Kim Marshall, a stunning 45-year-old with a svelte physique. "You could call this my addiction," she says as she waits to get on the rink. "People like us, we don't call ourselves skaters. We call ourselves true rollers. We get our roll on. We feel the beat and go with it, and the wheels just enhance the flow."

Marshall, like many of the true rollers at Rollerdrome, travels all over the Midwest to roller boogie at least four times a week. "I've driven to Youngstown in snow waist-deep just to skate," she says. "Once you start, you can't stop."

The first notes of a slow R&B number come over the PA system. Before Marshall can finish her sentence, a friend rolls up and yanks her onto the rink. "We gotta go!" shouts her friend. "This is our song! Time to get your roll on!"