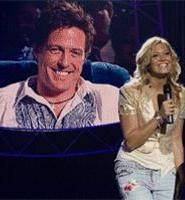 Wanna knock the prez? Let's make a show . . . preferably on television. Paul Weitz's new satire American Dreamz imagines the Bush regime as an episode in the history of American entertainment and American Idol as the quintessence of U.S. democracy. So what else is new?

The vision of America as a vast, ratings-driven amateur hour is not without promise, but Weitz's movie, named for the most popular TV program in its parallel universe, is disappointingly soft in its individual characterizations. Indeed, as befits a director whose slice of the American pie has been predicated on a self-proclaimed "franchise" of gross-out comedies, the movie is mainly about tolerance.

American Dreamz is a movie with two world-historic players and a raft of wannabes. Host of the eponymous TV show, Hugh Grant plays the role of the smarmy swine with convincing self-loathing. "I envy myself deeply," he tells his gorgeous girlfriend as she leaves him. Scouting new contestants, Grant actually finds one as callous as he -- a cheerleader from Padookie, Ohio (singer-actress Mandy Moore), who is as eager to exploit her boyfriend injured in the Iraq war as she is to mimic Christina Aguilera.

Moore's ultimate rival is a Chorus Line-loving Iraqi mujahid (newcomer Sam Golzari), sent to America by his disgusted comrades as a sleeper agent who will never be activated. Installed at the Beverly Hills home of his unsuspecting, bizarrely nouveau relatives, Golzari winds up on Grant's show. America is the land of opportunity -- his queeny cousin submitted an audition tape, and when the show's representatives turn up, they take Golzari for the applicant.

Meanwhile, America's president (Dennis Quaid) has just been returned to office. In a paroxysm of rebelliousness, he elects to stay in bed and read a newspaper, rather than meet the press. As one might expect, too much information precipitates a presidential breakdown; Quaid is shown surrounded by books, with Benjamin Barber's prophetic Jihad vs. McWorld prominently positioned for the camera.

The president's controlling chief of staff (Willem Dafoe), a combination of Karl Rove and Dick Cheney, who in one of their funnier exchanges assures Quaid that "I'm there for you," wants to restore the president's plunging poll numbers by positioning him as a guest judge on Grant's show. At this point, the mujahideen -- who, like everyone else in this universe, are addicted to American TV -- catch Golzari's act and, realizing that he has a chance to go all the way, designate him their suicide contestant.

The eerie spectacle of a jihadist prancing through "The Impossible Dream" notwithstanding, American Dreamz should really have been funnier. But it's not boring. Paddling vigorously through some mid-movie doldrums, Weitz unexpectedly brings everything together for a suitably madcap finale involving multiple betrayals and malfunctions, a remote-controlled president, star-struck terrorists, and an on-air marriage proposal. It's not exactly The Manchurian Candidate, but the whole world is watching.