August 16, 2006
comment
Crossing the Bridge: The Sound of Istanbul The Cinematheque 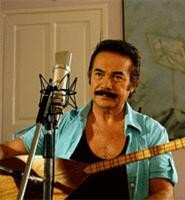 The strategically crucial Eurasian city now called Istanbul (population: 13 million, and growing by 700,000 a year) has had its share of upheaval over the centuries. It was conquered by Alexander the Great, torched by a vengeful Roman emperor, attacked by armies of the Islamic and Bulgarian empires, sacked by Crusaders, and overwhelmed by the Ottoman hordes of Sultan Mehmet II. All that happened before 1453; there's no point even talking about the Crimean War, the Turks' fateful decision to side with Germany in World War I, or the massive earthquake that devastated a huge area east of Istanbul in 1999.

Still, the great metropolis at the mouth of the Bosporus survives, constantly reinventing itself. In a compelling and beautiful new documentary titled Crossing the Bridge: The Sound of Istanbul, multi-instrumentalist Alexander Hacke (of the German avant-garde band Einstürzende Neubauten) and writer-director Fatih Akin (Head-On) seek to unlock the secrets of the city once known as Byzantium, then Constantinople, through a wide-ranging survey of its music. Fueled by a Confucian aphorism ("Music can tell you everything about a place"), the filmmakers insinuate their cameras and microphones into Istanbul's salons and clubs and back alleys, where they reveal a boiling stew of cultural history that, by comparison, makes New Orleans seem as bland as Salt Lake City.

One of the two Turkish DJs who, with an American tenor saxophonist, make up the group Orient Expressions reminds us that Istanbul lies at the nexus between East and West: "When you live here," he says, "your ears are open to everything." So, too, are Akin's. Born in Hamburg to Turkish parents, he personifies the diversity of a city where a neo-psychedelic band called Baba Zula -- by its own description, musically conflicted -- combines jazz, rock, and the myth of the Arabian Nights while, a few miles away in the neighborhood of Beyoglu, an 86-year-old balladeer named Müzeyyen Senar, who made her first stage appearance in 1933, preserves the fading art of classical Oriental salon music. It's a place where the Istanbul Style Breakers, a loosely organized community of teenagers obsessed with breakdancing, coexist with one Mercan Dede, a whirling dervish who married modern "club" sounds to Sufi religious tradition and summarizes the Dervish social code in one useful word: "Tolerance."

The European musician and sound engineer Hacke also recorded the ethereal Kurdish singer Aynur, whose haunting dirges are the soul of a musical genre called Dengbejen, from Arabic, Mesopotamian, and Jewish sources. Persecution of minorities has often been a theme of Turkish life: Enjoying a new liberty that could once more vanish, the lovely Kurdish singer asks plaintively of the world: "How can you call us enemies?"

For Hacke, Istanbul is an unknowable treasure trove. "I don't understand the city," he concludes at the end of Crossing the Bridge. "I only managed to scratch the surface." Maybe so, but his receptivity is as admirable as that of his collaborator behind the camera.