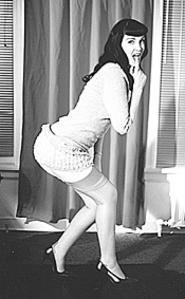 Experimental filmmaker Nico B. is infatuated with Bettie Page. And who can blame him? With her bangalicious hairdo, sexy garters-and-stockings get-up, and girl-next-door smile, the '50s pinup queen oozed personality. She was simultaneously ooh-la-la hot and playfully innocent.

But Nico isn't into that side of Page. He's into a later phase of her career, when she was making bondage films. Right before her movie-making mentor Irving Klaw was busted for obscenity. And right before Page found religion and dropped out of sight. Nico loves the tale so much, he put aside his usual sub-Lynchian, artsy-fartsy movie tricks and made Bettie Page: Dark Angel, a relatively straightforward biopic about Page's final years.

It all started with another Page -- Paige Richards, the star of such late-night Skinemax classics as Lord of the G-Strings: The Femaleship of the String and K-Sex: Lesbians From a Different Planet. She approached Nico at a party, and the two discovered they shared a passion for bondage pics. "I wasn't interested [in working with Richards] until she told me about her lifestyle," he says.