Turn This Mutha Out

George Clinton brings the funk he made famous. 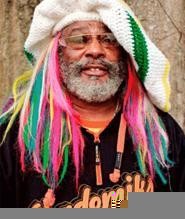 George Clinton's influence on American music is inescapable. From the theatrical, booty-bumping live shows to the witty music and adventurous language to his colorful hair and iconic presence, George Clinton is a musical Hall of Famer.

"P-Funk is like the DNA for hip-hop," Clinton says, and it's no empty boast. But Clinton's reach extends beyond funk, booty calls, atomic dawgs, and the Parliament-Funkadelic mother ship connection.

It began with an interest in Louis Jordan's jump blues, the 1950s doo-wop era of Frankie Lymon, and the early rock and roll of Jerry Lee Lewis; traveled through James Brown, Sly & the Family Stone, and Jimi Hendrix; and currently embraces rock, techno, ghetto metal, and hip-hop as the foundation for a new musical vision.

"I like to mix things together that don't go together," he says. "To me, any noise can become music. The more that we don't call it noise, the better appreciation we have of it. Feedback was considered noise at one time, until Jimi Hendrix came along and made it almost church."

Born on July 22, 1940, in Kannapolis, North Carolina, Clinton spent time in Washington, D.C., and northern Virginia before moving at age 10 to live with his father in Newark, New Jersey.

As a child, Clinton had various odd jobs. He shined shoes, worked in grocery and record stores, and delivered fresh vegetables by horse-drawn wagon. By age 17, he had landed a job at a hula-hoop factory in Newark. "My father told me, 'Work -- make your own money,'" he recalls.

During his stint at a record store, he often took leftover records and sold them for a quarter apiece at school. He was listening to Jerry Lee Lewis, the Big Bopper, and Elvis Presley.

"Jerry Lee Lewis was my Elvis Presley," he says. "I thought he should've been the king of rock and roll. His music was funky and really rocking."

For Clinton, Motown Records was the new doo-wop. While he was working in a Newark barber shop, he and his friends formed their own doo-wop group, the Parliaments. They eventually signed with Motown in '64, but little came of it, and the group left the label. In 1967, the Parliaments scored a breakthrough hit with "(I Wanna) Testify" for Revilot Records. Unfortunately, they ran afoul of the label and refused to record more music, eventually abandoning the name in the face of legal pressures and opting for Funkadelic.

The music changed as well, no longer inspired by Motown so much as Hendrix's use of big amps and psychedelic electric guitar, the gritty funk of Sly & the Family Stone, and over-the-top wordplay.

"Smokey Robinson is one of my favorite writers of all time. He used to have so much wordplay in all his songs. We overdid puns until it became ridiculous, especially during our Funkadelic days. We stressed being really stupid with the puns; then I realized you could actually make sense when they didn't make sense at first. You could tie them together in such a way that people weren't sure whether you meant to do it or not. I access all of it. We take a concept and throw it up in the air and take pot shots at it. I'd ask everybody to make the corniest joke or the cleverest joke you could make about it," he says.

Though Clinton regained use of the Parliament name in the 1970s, he worked strictly as Funkadelic for a time, releasing such landmark recordings as Free Your Mind and Your Ass Will Follow, Maggot Brain, and America Eats Its Young. Bootsy Collins joined up for the latter release, but the former James Brown band bassist really made his presence known with the rechristened Parliament, on its enormously popular '74 comeback, Up for the Down Stroke. Former James Brown horn section Fred Wesley and Maceo Parker joined Parliament in '76 for the band's highlight releases -- Mothership Connection, Clones of Dr. Funkenstein, and Funkentelechy vs. the Placebo Syndrome, which produced the group's only No. 1 tune, "Flash Light."

"We had put black people in situations nobody ever thought they would be in, like the White House. I figured another place you wouldn't think black people would be was in outer space. I was a big fan of Star Trek, so we did a thing with a pimp sitting in a spaceship shaped like a Cadillac, and we did all these James Brown-type grooves, but with street talk and ghetto slang. Make my funk the P-Funk. It was all kinda like drug talk. We were the first ones to call the music dope," he says.

A year ago, Clinton gathered the P-Funk family, along with guests Prince, Bobby Womack, Belita Woods, and Jazze Pha, for the double CD, How Late Do U Have 2BB4UR Absent?, his first studio recording in a decade. Womack lends a hand to an old-school R&B version of Jerry Lee Lewis' "Whole Lotta Shakin'," while Prince is heard on a remake of the old labor song "Brother, Can You Spare a Dime?", which they turn into the funky "Paradigm."

"That's something I was messing around with on a tape I took to Prince to do a mix of another song," he says. "I had all this wordplay, different versions of it on this tape, and I sent it to Prince to mix another song. He heard that one and took all these different things that I had on there and made a new song out of it and played the music to it. I was surprised he could even do that. I thought I was in different keys and things, because I was just thinking of getting samples. He took all the things that I had sung and made it into a complete song. It sounded beautiful to me when I heard it."

For all his legendary eccentricities, Clinton is a simple man at heart. He divides his time between his home in Michigan and the headquarters for his new record label, C Kunspyruhzy, in Tallahassee, Florida.

"I still like working in the woods in western Michigan and in Tallahassee. I like hunting and stuff like that," he says. "I'm a country boy. That's why I like the funk so much."