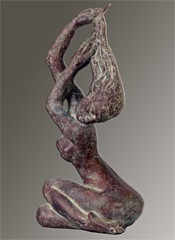 The Cycle of Life, a sculpture on the campus of Gilmour Academy in Gates Mills, is Thomas Turkaly's favorite of his late father's artworks. And the six-figure piece representing the family's lineage adds another layer of meaning to the new exhibit The Life of a Sculptor: Joseph Turkaly, which is on display through the end of March in Eastlake. "It does really bring back a lot of memories. It's hard to pinpoint exact memories, but it's like reliving your life in a way," says Turkaly. "Going back through all the pictures and sculptures is like living my life again through his work." Born in Croatia and educated in Italy, the elder Turkaly immigrated to the States in 1957. For more than 20 years, until his death last year, he taught art at the University of Notre Dame and at Gilmour. His two most prominent pieces are an 18-foot bronze statue that welcomes patrons to Notre Dame's library and a 9-foot statue of George Washington that now stands in front of the Erie County Courthouse in Buffalo. "By putting this exhibition together and focusing on his life, and how his life influenced his work, you get a greater appreciation of how his influences shaped his work," says Turkaly. The collection can be seen from 3 to 8 p.m. Fridays and 1 to 5 p.m. Saturdays, through Saturday, March 29, at the Croatian Heritage Museum, 34900 Lakeshore Boulevard in Eastlake. Admission is free. Call 440-946-2044 or visit www.croatianmuseum.com.
Fridays, 3-8 p.m.; Saturdays, Sundays, 1-5 p.m. Starts: Feb. 1. Continues through March 29, 2008