Saturday, March 22, at the Embassy. 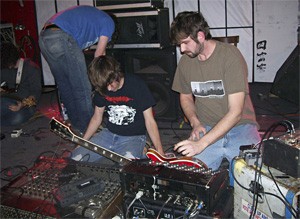 Tusco Terror noisemaker Stoney compares his band's live shows to "falling into a zone. Sometimes it comes together, and sometimes it doesn't." Sounds a lot like other groups' work models. But for this local quintet, it's literally true: The guys never know what shape their songs will take onstage . . . or on record, for that matter. "There's definitely times that we set out to achieve a certain progression in a piece of music," says Stoney. "We sit down and talk to each other about what we're trying to go for and what we're gonna have to accomplish. Then again, like any kind of improv thing, that whole plan could be thrown out the window five seconds into it." Tusco Terror's experimental noise will either scare the hell out of you or suck your soul out of your ears and return it a little jittery, but thoroughly refreshed. "It's schizophrenic," admits Nathan, who, like his bandmates, sports a single moniker and juggles several different instruments. "We're following a thread — there's definitely continuity, but it just kind of goes somewhere and finishes. There's no chorus we go back to."