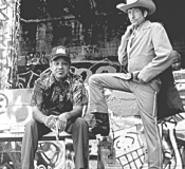 "A film starring Bob Dylan" -- five more frightening words you'd be hard-pressed to put into the same sentence, even among those who forgave the man for his grotesquely indulgent 1970 album Self-Portrait or sat though his disjointed home movie Renaldo and Clara in '78. The apologists, of course, will excuse Masked and Anonymous its myriad sins, chief among them rambling incoherence and deadpan tomfoolery; after all, the put-on being mistaken for the profound is what made Dylan a star in the first place. He's never made even the slightest effort to shield the smirk and mask the contempt for those who confused his mad-lib wordplay for reflective wisdom; he stared down and cut down those foolish enough to ask him What It All Meant, when it meant nothing at all. So when Dylan shows up in this all-star debacle, wearing the familiar pale and poker-faced sneer beneath a gambler's thin moustache and the dandy's cowboy hat, you get the sense that he's in on a joke he'll never share, -- which is unfortunate in a film directed by a Seinfeld alum that's intended to be a comedy.

Dylan hasn't appeared on film since 1987's Hearts of Fire, in which he played a Reclusive Rock Legend -- himself, in other words, with no effort made to "play" a "part." He's Jack Fate here, again Dylan by another name, and fetishists (and Greil Marcus) will likely spend the next 16 years pondering the deep meaning of a movie in which he once more offers a mordant variation on the myth. They will debate its significance, argue its implications, and contemplate its insight into a man playing a cowpoke shuffling into his last sunset. And it will be such a waste of time: Masked and Anonymous is the ultimate put-on, an A-list circle jerk of famous faces (Jeff Bridges, Jessica Lange, Ed Harris, Christian Slater, Luke Wilson, Val Kilmer, John Goodman, and so many more) paying homage to a man who seems not even to know they're there. You can't take your eyes off it, only because you can't believe that anyone would agree to pay for this or appear in it. The cast is game; the movie, gamey.

Masked and Anonymous, with its obvious in-jokes and comatose winks, wants to be treated as the cinematic equivalent of a Dylan song. Its inane dialogue, coyly credited to Sergei Petrov and Rene Fontaine (in fact, Bob Dylan and director Larry Charles), attempts to echo the rhythm and wordplay of Dylan lyrics. The actors, especially Luke Wilson as a confidante-cum-hanger-on, attempt half-hearted Dylan impressions to accommodate the poetic nonsense they're asked to put in their mouths and gargle. "Looks like a leech, a bleeder, some kind of two-faced monster, spy . . . Lee, he probably would have had him shot; Sherman woulda hung him," Wilson says of a washed-out reporter played by Bridges, who seems fresh off the Big Lebowski set. It's as if someone took every Dylan song, rearranged the words, and said, "Action."

The film's set in some inexplicable netherworld -- Los Angeles if it were dropped into Argentina, a dusty nowhere run by a despot on his deathbed. The film opens as though it had 30 minutes lopped off at the beginning; disorienting is one thing, but sophomoric incoherence is merely unforgivable. Goodman's sleazy concert promoter is in debt to two goons for some money, so he springs Dylan from a basement prison to play a benefit concert for, he insists, the dying dictator; he fancies the event a cross between Woodstock, Altamont, Live Aid, and Elvis's '68 comeback special. It's more like Americathon, as directed by Alex Cox during his Straight to Hell and Walker era -- a muddled free-for-all, populated by actors who seem as if they're on their way to getting stoned or just coming off a hangover. It strains for some kind of meaning -- the dictator turns out to be Dylan's old man, with whom the singer would like a last-second reconciliation . . . or something -- but asks you to do the work it can't and won't perform on its own. You can figure out the muddled story, which has to do with the dictator's mistress (Angela Bassett) and Dylan and his old man in some creepy love triangle, but why pay attention to something that doesn't seem interested in itself?

Larry Charles, the Seinfeld writer and Curb Your Enthusiasm director, apparently directed this movie without actually visiting the set; he's made a film that's really about nothing -- which is appropriate, absolutely. But it's worse than that. Charles has made something indulgent, amateurish, dull, and pretentious -- pointless, in other words. Charles can't be the only one to blame here: Dylan's nothing if not self-indulgent, a man who has so often used the very fame he claims to hate to get away with making shit and selling it as gold. He's never been a good judge of his own material, releasing mediocre stuff while stockpiling the invaluable work that turns up only years later on bootlegs or archival releases; you can't trust the Jokerman. All the movie has going for it is a few scenes in which Dylan performs with his now-extinct band, featuring Charlie Sexton; a few of those songs, and covers of Dylan standards, appear on a soundtrack album currently being hawked on late-night cable infomercials. It all seems so unseemly.