The world's fastest rapper is no overnight success. 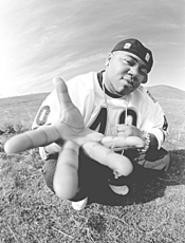 A dozen years after entering the Guinness Book of World Records as the fastest rapper around, Twista has achieved a feat almost as rare.

In a genre notorious for its short memory, a veteran MC who's been absent from the charts for years is almost guaranteed to stay kicked to the curb. The idea that he could not only return from limbo, but top the charts, seems as ludicrous as Bill O'Reilly's favorite rhymer.

Yet that's just what Twista has accomplished this year with Kamikaze, his first major-label outing since the late '90s. Both the album and its comedic salute to gettin' busy, "Slow Jamz," have reached No. 1 on the Billboard charts, and that song's producer and co-star, fellow Chicago native Kanye West, has teamed with Twista to make the Windy City this year's hottest spot in hip-hop.

Sudden success, however, is no told-you-so moment for the fleet-tongued, 30-year-old star.

"Even when Kamikaze came out, I wasn't feelin' it. I was terrified," admits Twista. "I was like, 'Man, this might be the end, right here.'"

It's not hard to understand his pessimism. After Twista extricated himself from his old label, Creator's Way, and signed a solo deal with Atlantic, his new bosses promptly rejected several early versions of Kamikaze, waiting to hear that all-important hit.

"What's crazy is, I would think we had a good single, and they would say, 'Nah, it ain't a good single,'" he recalls. "But that would free me up to have another three weeks to work on the album, to add another song."

Looming over him was the pressure of following up 1997's Adrenaline Rush, an album of lightning-quick verses that's regarded as a classic. "But it was an underground classic," he stresses.

"After that, things started to happen that led me to only halfway believe in myself. You hear rappers come out with simple lyrics and simple beats, and you try your best to compromise what you do to achieve the success they achieved," Twista says, describing his wilderness years in the early 21st century. "And when you don't, after a while you start to doubt yourself.

"But when 'Slow Jamz' came out, that made me believe in myself to the fullest. I was like, Okay, I can make some dope shit. I can go platinum. I'm not crazy!" he says with a laugh.

The song, a roll call of bedroom bump merchants that declares, "I'm lovin' the way you be holdin' me/When I be listening to Jodeci/And when I come over and bend your ass/You be bumpin' Teddy Pendergrass," was produced by West, an old pal over the past decade, who's now hip-hop's producer du jour.

"We would work together off and on. Early on, we used to be at clubs together, then later on, I'd go over to his crib," Twista says. "So once he got into the industry, I was real proud of him. And he was like, 'This is Twista from the Chi, I wanna make sure I show love to him. I believe in T.'"

When West traveled to California to mix "Slow Jamz," he also lined up another guest: comedian Jamie Foxx, who provides the intro. The collective star power has made Twista the celebrity he's threatened to become since entering the Guinness Book (breaking ragamuffin soldier Daddy Freddy's old record), and he says he remains grateful every day.

"You do somethin' for 13 years, and you don't get it and keep seein' people fly by . . . when you get it, after all the mistakes you done made, you pretty much know how to appreciate it, every aspect of it," Twista says.

Born Carl Mitchell on Chicago's West Side, he was originally known as Tongue Twista when he debuted in 1991 with Runnin' Off at da Mouth. He shortened his handle but didn't slow down on the mic, yet before making a memorable cameo on "Po Pimp," the huge 1996 hit from Chi-Town's Do or Die, he'd become frustrated enough with music to take a day job as a telemarketer.

"I had finally accepted that I gotta focus on my family. I got a kid, and I couldn't chase the game on the full level like I did," he says. "A lot of times, I just wanted to give it up and quit. I was playin' 'Po Pimp' for my buddies on the 'L' on my way to work, sayin', 'This is what I recorded last night.'"

When the majors finally beckoned the following year, Twista delivered a true Adrenaline Rush, gaining widespread attention for his blinding sheets of verbiage. But the momentum was derailed when his old label, Creator's Way, sued him over copyright issues, a stalemate that left him languishing in indieland for years (and killed a deal with P. Diddy's Bad Boy) until a settlement was reached.

Even after signing to Atlantic, Twista was disappointed enough with the label that when Roc-A-Fella CEO Damon Dash began pursuing him, he publicly entertained the notion. But today, Twista says he "got a lotta respect for Atlantic, because of the way they played it out with Kamikaze." A potential joint deal with the Roc and Atlantic "is still pretty much in the air . . . even if it doesn't happen, Dame got enough respect for me to acknowledge me as a Roc-A-Fella artist, and Atlantic has enough respect for me to know that I know where home is. And it don't hurt on the marketing either."

In the meantime, Twista is enjoying his status as an elder statesman. To young artists who come seeking a quicksilver cameo, Twista advises, "That 16 bars that you tryin' to get from me might not be worth more than an hour of my conversation."

And success has made him rethink his former pledge to give up rapping after five or six more years.

"I might be able to push it a couple more years after that, but that's about it," he says with a laugh, before explaining that he's only talking about his rapid-fire "all-out rapper mode."