Rodney Crowell follows a retrospective album with one that's introspective. 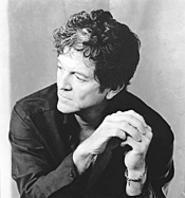 On his 2001 album The Houston Kid, Rodney Crowell reminisced about a half-century of life as a child, a musician, and a father. It was a personal look back for Crowell, whose new album, Fate's Right Hand, looks within. "The next one's gonna be looking around," he jokes.

Fate's Right Hand explores the emotional attachment and the troubling consequences that come with being a responsible adult. Songs such as "Earthbound," "The Man in Me," and the title tune pry at the roots of discomfort. The album plays like a spiritual quest, but without a specific goal in view. "I've spent most of my life trying to figure out my spiritual landscape," Crowell explains. "I grab ahold of it sometimes and understand it really clearly. Other times, I don't have a clue. But I didn't want to tiptoe around this time. I just jumped in."

Crowell has been making records for nearly half his 53 years. He's recorded more than half a dozen No. 1 country hits and written songs for Waylon Jennings, Bob Seger, and Tim McGraw. He produced albums for his onetime father-in-law, Johnny Cash (Crowell was married to Cash's daughter Rosanne for 12 years). By the end of the '90s, he was ready to abandon the Nashville music factory. "I have scars," he says. "But they grow back nice. And some of them I want to keep. They're badges of courage. I survived. And I survived with my humor intact."

The Houston Kid came as a jolt to Crowell. The songs suddenly poured out of him, as if years of industry compromise had finally taken their toll. "I do this for my own reasons now," he says. "I don't pander to the corporations anymore.

"[The Houston Kid and Fate's Right Hand] are byproducts of my spending a great deal of time writing prose and the revision that goes into writing sentences. Good writing is what inspires me these days. It really affects my work as a songwriter."

After The Houston Kid, Crowell composed another album's worth of songs that followed a similar prickly path. But he shelved them and instead pursued Fate's Right Hand, a spiritual sequel to The Houston Kid. "After September 11, this record seemed like the most important one to me," he says. "I write songs and then let them tell me what they want to be. I couldn't have written them 20 years ago. Believe me, I would've if I could've."

Now, Crowell's ready to move on. He's considering revisiting the lost songs. They're a good set of tunes, he thinks, and they've had time to adjust to their proper place in his newly introspective canon. "The songs explore southern culture. They're my take on the culture from which I sprang. I want to capture the nobility of the South -- and some of the decadence.

"I'm starting to see a thread of what they want to be. But I gotta be patient and let them form."