The Beck Center saves Jekyll and Hyde from its ugly side. 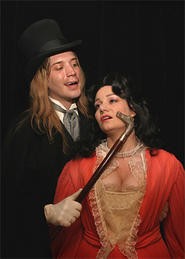 Most of us wish, from time to time, that we could bring out a hidden side of our personality to help out in certain situations. Like when some obnoxious creep is talking too loudly in a movie theater, you might want to call upon your submerged Dirty Harry persona, turn around, and shut him up with a flinty-eyed "You feel lucky, punk?" Of course, after your release from the hospital, you might have second thoughts about that course of action.

Unfortunately, there weren't enough second thoughts when the ultimate story of split identities, Jekyll and Hyde (the musical), was assembled by Leslie Bricusse (book and lyrics) and Frank Wildhorn (music). Featuring a collection of similar-sounding bravura musical numbers, linked by less connective tissue than you find on the average anatomy-class skeleton, this piece is a disaster waiting to happen.

But surprisingly, the folks at the Beck Center manage to make J&H a mostly entertaining and occasionally involving excursion into the schizoid mind. That is, if you're able to put aside a couple of comic-book twists added by director Scott Spence.

This person-within-a-person conceit is among the most familiar in story lore; it has been adapted for everything from the Hulk TV series to a gaggle of Looney Tunes cartoons. And it always rings true. Each of us has different and contradictory elements inside, and it's fascinating to contemplate what would happen if we could separate and distill those conflicting essences.

In this telling, the heady and committed Dr. Henry Jekyll is absorbed in his quest to isolate good from evil in a human being, but his proposed study is rejected by a stuffy board of governors. So he decides to try his potion out on himself by injecting the substance into his arm, which morphs him into Edward Hyde, freelance sociopath.

Much of the credit for this production's high points go to Dan Folino, who turns Jekyll into an obsessive-compulsive geek. Repeatedly touching stairway finials and the arms on a hat rack, Jekyll is perpetually bent over and beaten up by the powers that be. But once he mainlines his joy juice, jerky Jekyll is replaced by a smoothly amoral Mr. Hyde, complete with flowing locks. He's a self-admiring and homicidal cross between Fabio and Dick Cheney.

Folino handles this switch with professional assurance, even though his Hyde looks less like a subset of Jekyll's personality than an entirely different person (à la the switch from Julius Kelp to Buddy Love in Jerry Lewis' The Nutty Professor). Fortunately, Folino's lustrous singing voice makes many of the tunes sound better than they actually are, particularly in "This Is the Moment," when Jekyll decides to take his chemical leap into the unknown.

Matching Folino in stage presence and singing power is Amiee Collier, who plays whore Lucy Harris with streetwise sensuality wrapped around a sweet, tender core. She leads a group of tramps in the rousing "Bring On the Men" and later almost stops the show with a quiet ballad, "Someone Like You."

However, there are inherent problems with a book that relegates Jekyll's fiancée Lisa (a game Maggie Stahl) to a veritable cipher. Except for her duet with Lucy, "In His Eyes," Lisa virtually disappears. Indeed, no other characters are drawn with an ounce of interest or individuality, including the wooden John Utterson (Ian Atwood), who is supposedly Jekyll's closest friend.

Director Spence conveys excellent detail in many of the crowd scenes, giving peripheral characters small bits that add to the texture of the work without becoming a distraction. But Spence also gives in to some special-effects cheese -- pulling a heart from one person's chest, yanking the guts out of another -- that seems less mid-19th-century London and more like an Itchy and Scratchy episode (call it "Happy Entrails to You").

The slick production is abetted by a gorgeous set designed by Don McBride. The musical direction by Larry Goodpaster is largely flawless, as is the 14-person orchestra under his baton.

When novelist Robert Louis Stevenson conceived his bipolar protagonist/antagonist, he probably never thought Hank and Ed would be twisted into a musical that has more laughs than shudders. But so goes the Broadway bastardization process. RLS should just be glad companies as capable as Beck are able to breathe life into this misshapen material.