You won't recognize it from lunch to dinner, but you'll want to know it both ways. 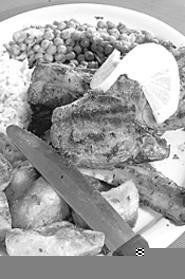 It doesn't seem entirely fair: Many restaurants struggle to develop just one unique identity, and handsome Fournos Café has two -- one for lunch, and one for dinner -- and each of them is more than a little charming.

During daylight hours, for instance, the Greek-accented Independence café is a speedy yet civilized lunch stop for the white-collar workers who toil at the nearby cube farms. Incoming guests proceed directly to the counter at the rear of the restaurant; order from a small, overhead menu featuring gyros, panini, salads, and the like; and then hand over their money before proceeding to a self-service beverage island and grabbing a seat at one of the commodious tables or booths that line the sunny, uncluttered dining room.

Within minutes, cheerful runners appear tableside with guests' orders, served on sturdy white china and accompanied by substantial flatware. Later, the same staffers return to clean up after noontime guests, no tipping required. As a result, lunch at Fournos adroitly combines the efficiency of a fast-food stop with the niceties of sit-down dining.

Come evening, though, the pace slows down, with full tableside service, white cloth napkins, votive candles, and an expanded menu of Hellenic specialties, beginning with classics like flaming saganaki, torched to the cries of "Opa!," and ending with ample triangles of homemade baklava, sweet with honey. In between, diners can savor well-prepared, amply apportioned Greek standards like lemon-roasted chicken, with frangible, golden skin; velvety lamb chops, straight from a Geauga County farm; and massive blocks of lush pastitsio -- a sort of Grecian lasagna, constructed from firm penne, cinnamon-scented Bolognese, and a tall, fluffy cap of béchamel. Best of all, entrée prices range from only $11 to $19 and typically include warm bread and a salad or choice of side dishes -- meaning a couple can easily indulge in a homey feast and maybe even score a glass or two of wine without busting the budget.

For all this, enthusiastic eaters have Fournos's managing partner, gregarious host, and knowledgeable wine guy George Loucaides to thank. The former Cookers manager, with the able assistance of kitchen manager Rusty Lane, has done a fine job turning family recipes into good-tasting meals and transforming a neat, airy, but not particularly glamorous strip-mall setting into a warm, casual restaurant, done up in refreshing shades of cobalt, turquoise, and sandstone, and offering a large, shaded patio for eventual warm-weather dining.

An overstuffed gyro, served with homemade chips or a choice of side dishes, was our lunch pick during one midday visit, and it turned out to be a very good one indeed. Unlike many of its lesser brethren, this was one pita wrap whose filling was far more meat than lettuce, and that meat -- a particularly hearty version of the traditional compressed lamb and beef, sliced from a vertical spit -- was a moist, savory mouthful highlighted by a swipe of flawlessly fresh tzatziki, crafted from the restaurant's own homemade yogurt.

On another lunch hour, we went for the ample Greek salad, a mundane mix of mostly iceberg lettuce, suitably glammed up with both green and black cured olives, chopped tomato, thinly sliced red onion rings, and plenty of big crumbs of feta. A robust homemade balsamic vinaigrette, served on the side, added the final bold stroke of well-balanced flavor.

On both midday visits, the speedy setup meant we could have been in and out in well less than our allotted 60 minutes if we had cared to. Our second visit, though, was slightly tarnished by difficulty locating a clean table. Worse, when we asked a staffer to give our crumby table a wipe, the cloth she used was, uh, less than mountain fresh.

Enthusiastic but unpolished service was also the relative weak spot of an otherwise enjoyable dinner visit. Among her missteps, our young waitress forgot to put in our saganaki order until after she brought our salads; needed several reminders to bring cream for our after-dinner coffee (and then stood next to the table, digging the little tubs of creamer from the depths of her lint-lined pocket); and, perhaps five minutes after offering us coffee refills, returned to tell us that if we wanted more coffee, we would have to wait (some more) while she brewed a fresh pot. Still, she was so obviously sincere in her desire to please that it was hard to hold inexperience against her.

Besides, any lingering clouds of annoyance dissolved in the face of the mostly well-prepared food. For instance, a first-course cup of creamy chicken-and-rice soup, flavored with a mixture of egg and lemon (the signature avgolemono), hummed with wholesome flavors, leading a soup-loving companion to proclaim, "Now, this is what chicken soup was meant to be!" Salads, including a caprese-like pairing of fresh mozzarella and tomato, with a chiffonade of fresh basil, sprang to life via sassy, well-seasoned homemade dressings. And our "better late than never" saganaki -- buttery-smooth fontina, lightly battered, and flamed so exuberantly with brandy that it threatened to set off the smoke alarms -- was every bit as scrumptious as it was entertaining.

Among the main events, the cinnamon-scented pastitsio; a quartet of well-seasoned, locally raised lamb chops; and moist, lemon-spiked roasted chicken could scarcely have been better. But a pair of grilled, boneless pork chops were slightly overdone and dry, and side dishes -- lemony oven-roasted potatoes, frozen French fries, dill-flecked green peas, and a medley of summer squash, zucchini, carrots, and broccoli -- were uniformly utilitarian, but unremarkable.

To drink, Loucaides has put together a moderately priced international wine list, with an emphasis on reds; given his apparent depth of wine knowledge (which he enjoys sharing with dinner guests as he works his way around the room), we are surprised that he hasn't added tasting notes and pairing suggestions to the menu itself. Still, we managed to find a winner in a bottle of Cline Ancient Vines Zinfandel, a soft, jammy red that paired up particularly well with the lamb chops; the wine retails for around $16, so its $29 price tag on Loucaides's wine list seemed like a good value too. Equally engaging, wine service was properly executed, and while the stemware was more functional than fancy, the goblets were capacious and properly shaped for the ritualistic sniffing and swirling. (All the wines can be purchased at state minimum prices for carryout.)

For a traditional ending, we recommend the baklava, a sandy-textured stackup of phyllo, honey, and chopped walnuts; a single order consists of two oversized triangles -- plenty for a couple to share as a final taste of something sweet. There's also a small selection of flavored cheesecakes and multilayered tortes made by a local baker.

Of course, it goes almost without saying that, for most of us, having two faces is nothing to brag about. But at the comfortable Fournos Café, the day-and-night duality seems to work out just fine.