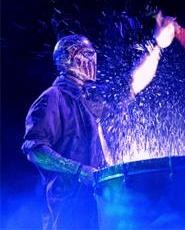 The Eagles of Death Metal christened the new Ultra nightclub with an exclusive after-concert party on October 21, a warmup to its public opening this Friday.

The upscale dance club is located in Cleveland's hottest party district, in the former Cabaret Dada space under Liquid (1212 West Sixth Street). It's the eighth spot in the Liquid Living chain, which includes two Atlanta nightclubs and five other Cleveland bars, including the Boneyards and Tequila Ranch.

"I want it to be a place for people that want style," says Liquid Living founder Terry Barbu, a onetime bartender who has designed 31 clubs. He's hoping to attract a crowd that's graduated from Liquid, a popular destination with young professionals for 11 years. The 21-and-over club won't have a formal dress code, but it will prohibit ball caps.

Visitors enter through Liquid and move downstairs into a dim-lit, red-and-gold, Morocco-themed room. The brightest spot in the open room is a dance floor with a full lighting rig. Bottle service is available in a VIP section. The club has more leather couches than bar stools -- Barbu says he spent more than $60,000 on sofas.

Ultra will be open Mondays, Wednesdays, Thursdays, and Fridays. DJs will spin accessible music that Barbu describes as "Las Vegas-style -- house, a little hip-hop that has a dance beat, a little rock, remixes, and lots of mash-ups."

Two other venues have opened on the block in recent months: Across the street, overlooking the lake and stadium, Sinergy (1213 West Sixth Street), with its space-age decor, is a restaurant by day and a dance lounge on weekend nights. At 1303 West Sixth Street, expansive Jac's Restaurant and Lounge has hardwood floors, sofas, and an eclectic American menu.

"West Sixth has a number of great years to it [still]," says Barbu. "As long as people feel comfortable and safe, it's there as long as [the club owners] want it. I think Ultra will be the shot in the arm the area needs to keep it going."

· Electro-pop group 20goto10 has replaced frontwoman Sara Eugene with Andrya Parry, formerly of the Promise Book. "Our new direction is more of an indie rock-synth thing," says bassist Matthew Sturgeon. "We have a live drummer, Brandon Brewer. Corey Jenkins went from bass to guitar, and I went from synth to bass. There will still be synthesizers, but it will have a more organic feel."

· This Moment in Black History is playing two showcases -- The band's MySpace page calls them an "industry suck off" and "big deal showcase" -- at New York City's CMJ festival Thursday, November 2, and Friday, November 3. Then they'll high-tail it home for a CD-release show at Parish Hall (6205 Detroit Avenue) Saturday, November 4.

· The Chicago noise-pop group Sybris will appear at Record Revolution (1828 Coventry Road) at 6 p.m. Wednesday, November 8, prior to its set at the Grog Shop (2785 Euclid Heights Boulevard) that night.

· Canton's Lovedrug has posted a melodic new track called "Casino Clouds" at MySpace.com/LoveDrug. The group has shot a video for "Ghost by Your Side," the lead single from its new EP, Everything Starts. It's available exclusively at the group's shows.

· Visit clevescene.com/blogs for exclusive music news, including a review and color pictures from Mushroomhead's Halloween show.