Unbridled (and Delightful) Hysteria in 'The Toxic Avenger' at Cain Park 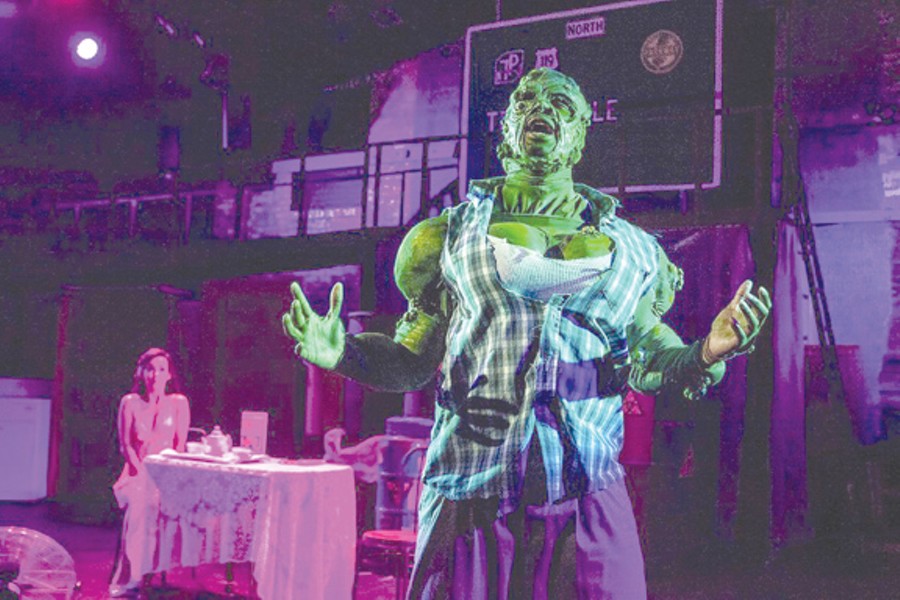 There seems to be a trend in the choices theaters are making regarding musicals they produce. Maybe it's a desire to attract younger audiences, or it's the popularity of comic book heroes as the subject of television shows and movies, but like it or not, the age of "unusual" protagonists is here.

Broadway has a serial killer in American Psycho, Beck is running The Heathers about mean girls, Cleveland Play House showcased Little Shop Of Horrors and a human-eating plant, and Blank Canvas staged The Wild Party, which was filled with drugs, "offing" people, and rock and roll. All contained murderers, weirdoes and/or perverts. Ah, for the likes of Oklahoma and Finian's Rainbow. Even the gun-toting female in Annie Get Your Gun would do.

Now Cain Park, that leafy little oasis in the middle of Cleveland Heights, has transformed the stage of its intimate Alma Theatre into a New Jersey toxic waste dump and is staging The Toxic Avenger.

Yes, The Toxic Avenger, a rock musical based on Michael Herz and Lloyd Kaufman's 1984 cult film about the attempt of a sweet young man to clean up a New Jersey town, with death-filled results.

The musical, written by Joe DiPietro (who was born in Teaneck, New Jersey, and was responsible for Memphis, All Shook Up and I Love You, You're Perfect, Now Change), with music by David Bryan, and lyrics by the same duo, contains songs with titles such as, "Get the Geek," "Kick Your Ass," "Thank God She's Blind" and the ever popular, "Bitch/Slut/Liar/Whore." Really! (Could I make this up?)

Before the conclusion is reached that The Toxic Avenger is a definite "do not see," be aware that it's impossible for anyone with a sense of humor, who likes outrageous slapstick, cross-dressing, soft rock music, and an affinity for the bizarre, not to enjoy themselves. (The young lady sitting next to me at opening night, mid first act, leaned over and whispered to her equally hard-giggling friend, "I just wet my pants from laughing.")

So, what's all the fun about?

Once upon a time in Tromaville, New Jersey, there was a corrupt mayor-lady (who resembles Gov. Chris Christy in many ways and has a Donald Trump hairdo), who with her henchmen (bullies, mobsters and crooked politicians) controlled the city and used it as their personal piggybank, caring little for the environment or the population.

In the same town was Melvin Ferd III, a geeky aspiring scientist, who loves Sarah, the blind librarian. Melvin wants to clean up the town's toxic waste dump and also dump the mayor. For his troubles he is thrown into a vat of sludge and comes out a hulking green monster named "Toxie." Toxie becomes a superhero to many as he fights city hall and sleazy politicians and businessmen whose greed have made the correctly named Tromaville unfit for human inhabitation.

In the process, the hysteria is flamed by the blind librarian tripping over every pebble and crack, an old lady being stuffed into a washing machine, lots of men dressed in drag who sing and dance, as both good and bad guys. Also on stage is Oprah doing her interviewing thing, animal puppets, men with "acne on their soul," a battle of hairspray cans, a singing and dancing nun, hairdos from hell, and, of course, Toxie, running wild. The political-infused ending is timing-perfect during this election year.

Add a wailing, but subtle, rock score, several nice ballads, fun attempts at coordinated dancing, extended farce, and lots of slapstick, and you have The Toxic Avenger.

The cast is outstanding. Baldwin Wallace musical theater grad Ellis C. Dawson III is Toxie-right! He is a hero's hero, complete with green warts, a dangling right eye, glued-on muscles, a charming personality and a nice voice. His "Kiss Your Ass" and "I Promise" were nicely presented.

Natalie Green is wonderful as the cute and well-meaning Sarah. Her duet, "Hot Toxic Love," sung with Dawson III, is delightful.

Zaftig, big-voiced Kate Leigh Michalski does triple duty as the big-haired mayor, Toxie's mother and the singing nun. At one point she appears simultaneously as both the mayor and the mom, with hysterical results. (The wig designer, who gets no credit in the program, outdid her/himself on that visual allusion.)

Malik Akil, another BW musical theater grad, has impressive stage presence and a good sense of comic timing, whether he was playing a black dude or in drag. Trey Gilpin was Akil's match in "Get the Chick."

Jordan Cooper and his band rocked it right and wisely didn't drown out the singers.

P. J. Toomey's special effects, which it can be assumed included the makeup that transformed Melvin to Toxie, were impressive.

Though the set changes were a little cumbersome, the off time was filled with clever actions and lighting effects.