A folkie's revival continues with a set of previously unreleased recordings. 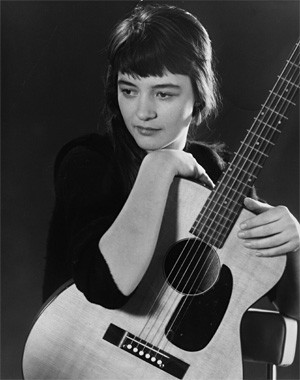 Since her death in 1993, Karen Dalton's fan base has grown faster than a Colorado mountain town. And fans can thank a retired builder from Indiana named Joe Loop for a new batch of previously unheard recordings, Cotton Eyed Joe — a collection of songs Dalton made in the early '60s.

Back in 1961, Loop was just another Midwest bohemian who read Jack Kerouac's On the Road, dropped out of school, and headed west. He eventually settled in Boulder, Colorado, where he stumbled into owning the Attic, a tiny club serving as a key stop on America's rapidly expanding folk-music circuit.

In an intimate setting that sat no more than 50, Loop booked many of the scene's top folkies — including a pre-Byrds David Crosby, the Holy Modal Rounders, and John Phillips (several years before he formed the Mamas & the Papas). But it was Dalton, a young beauty with long black hair and Irish-Cherokee blood coursing through her veins, who really caught Loop's ear and eye. He brought a portable reel-to-reel to the Attic soon after Dalton's 1962 audition and started recording his new friend's performances. Those songs make up Cotton Eyed Joe.

"The early folk-music crowd was a pretty straight bunch and clean-cut," recalls Loop. "That wasn't Karen at all. She didn't get noticed by that in-crowd scene, although there were a lot of musicians who liked her."

Indeed. Bob Dylan adored her, as did folk-rock architect Fred Neil, whose deep, phantom croon was informed by Dalton's. And as rock and roll legend has it, the Band's "Katie's Been Gone," a classic Basement Tapes track, was written in her honor. Yet Dalton — who split time between Boulder, Woodstock, and New York City, like many other wandering folkies back in the day — never achieved mainstream recognition in her lifetime. But like many great blues singers, Dalton exuded dark romance, spiritual mystery, and brooding emotion. "It's cliché to say, but she had real soul," says Loop.

There are several reasons why Dalton never became one of folk's poster children. For one, unlike many of her contemporaries, Dalton lacked business savvy. Also, she made just two studio albums: 1969's It's So Hard to Tell Who's Going to Love You the Best and 1971's In My Own Time, a knotted chunk of rural soul that stands alongside such singer-songwriter landmarks as Nick Drake's Pink Moon and Neil Young's Harvest.

"Performing was a weak spot for her," says Loop. "The Attic was different, because it was a small place and she was comfortable there. But there was something about a gig. She just had trouble facing that."

Loop and Dalton kept in touch — even when the fragile singer suffered through commercial failures and devastating addictions to hard drugs and alcohol. Loop remained one of her biggest fans and most loyal friends. He constantly tried to turn others on to Dalton's music. But few shared his obsession.

Through the decades, Loop brooded over those old reels he made at the Attic (which closed in 1963), frequently playing them in private, because no one else ever cared to listen. "I knew it was good stuff, but what do you do with it?" he says. "There wasn't anything to do with those tapes for the longest time."

Until now. Popular taste has apparently caught up with the enigmatic Dalton. Deluxe CD reissues of her two LPs have precipitated a deluge of critical gush. Indie hipsters Devendra Banhart and Joanna Newsom and all their freak-folk followers treat Dalton like a patron saint.

When the French imprint Megaphone was preparing its rerelease of Dalton's debut last year, the label tracked down Loop for archival photographs. Not only did he hook Megaphone up with a wealth of never-before-seen photos; he unleashed those old Attic recordings, which few Dalton experts even knew existed.

And Cotton Eyed Joe sounds great — especially coming from an amateur recorder who was working with early '60s gear. More important, however, the two-disc set captures a side of Dalton that her original releases never could. "On her first record, she's making room for the other players," says Loop. "But on Cotton Eyed Joe, she doesn't have to wait for anybody. She's free to bring in all the subtleties in her timing and playing. This disc shows what she can do by herself."

Like blues maverick John Lee Hooker, Dalton's pained cry follows such a deeply individualized sense of rhythm and melody that it blossoms during solo performances. The songs heave and lunge like ocean waves breaking upon a rock-strewn beach. The same can be said of her guitar and banjo picking — both of which are downright virtuosic. "On 'Fannin' Street' her guitar sounds like an orchestra," says Loop. "It's hard to believe one person is doing all that."

But because Cotton Eyed Joe is such a personal statement, it's a far more challenging listen than It's So Hard to Tell and In My Own Time. "It's not a very good introductory CD," admits Loop. "But on the other hand, people who have already heard Karen will really like it. If people take the time to listen, I don't know how they could not like her."