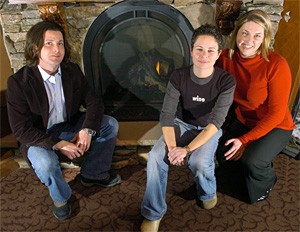 As any chef will tell you, a great dining experience is almost always built from great ingredients.

Maybe that's what puzzles us about Wine Bar Rocky River, a popular West Side hangout that opened last September and boasts a lengthy wine list, tempting menu, and kitchen hours that stretch from lunch to late night, daily. From savvy owners and a well-seasoned chef to a handsome patio and a snug interior, all the "great ingredients" are there. But toss them together, and somehow, the place just doesn't pop.

Which is not to say the wine bar lacks charm. Thanks to a secluded setting, cozy fireplace, and soft lighting, it's sort of the architectural equivalent of a pair of flannel pj's: warm, cozy, and inviting. The vibe is free from even a whiff of formality, with flat-screen TVs, T-shirted servers, and a noisy, laid-back clientele.

For this, thank owners John Owen and Dave Rudiger. No strangers to the local food scene, they own the Warehouse District's Dive Bar and Blind Pig Speakeasy, The Ironwood Café in Westlake, and the South Side in Tremont, where they also partner with Rocco Whalen on the trendy Fahrenheit.

While Owen will tell you that Wine Bar is a bar, not a restaurant, that's a hard posture to maintain when you bring on board a chef of Jill Vedaa's stature. A Cleveland vet, Vedaa's résumé includes gigs in some of the city's top kitchens — Flying Fig, Moxie, Lola, and the former Mise among them.

She obviously takes her kitchen duties seriously, overseeing a lengthy menu that travels far beyond the standard cheese and crackers into the realm of salads, sandwiches, entrées, and savory-sounding apps, in styles that often borrow from Asian and Southwestern pantries — surprising, actually, since both are notoriously tricky to match with wines.

Yet somehow, what comes out of Vedaa's kitchen tends to be remarkably dull. That includes small, chewy rings of fried calamari in a limp white-cornmeal breading; ho-hum pot stickers filled with slightly dry chicken; a bready "fat bread" pizza, scantily topped with cheddar, sliced scallions, and bits of bland barbecued chicken; and perhaps most disappointing, a dull entrée of sliced pork tenderloin and tender, but somehow flavorless, baked beans.

Not everything falls flat, of course. Among the better options: Avocado and brie lent an inventive spin to the ubiquitous bruschetta, although the accompanying hit of garlic could put a crimp on tête-à-têting. We also enjoyed the turkey-breast wrap, enlivened with brie, julienned apple, spinach, and honey Dijon dressing; we just wish the house-roasted bird had been thinly sliced, not hacked into dryish hunks. (Vedaa's kitchen, it turns out, doesn't have room for a meat slicer; this also explains the odd slabs of spicy coppa, sliced thick as honey-baked ham, on the lackluster cheese plate.)

From those delights, though, it was back to Yawnsville, with a plump Black Angus burger that, despite its good looks, tasted almost entirely unseasoned. Only the side of "wino fries" — limp, lightly salted, and just slightly greasy — managed to hold our attention. We went the burger route again on a second visit, this time in the form of four little sliders, topped with a choice of cheddar or blue cheese, and garnished with a homemade pickle. Not bad, but still far from a rousing repository of juicy, beefy goodness.

In fact, besides the wino fries, the only dish that truly moved us was dessert: the tongue-in-cheek Elvis, a trio of miniature peanut butter, chocolate, and banana crème brûlées, each cool and silken beneath a frangible burnt-sugar crust.

As for the wine, we suspect that true connoisseurs may wish for more, not less, "pretension" — possibly in the form of more elegant stemware, a wider range of price points, more wine flights, and more informed and interested servers, inclined to chat about the finer points of what they're pouring.

Don't expect much guidance from the West Coast-leaning wine list either. While GM Chris Hammer took the time to group the 100-plus bottles beneath such whimsical headings as "sensitive," "dramatic," and "soft curves," he overlooked the more helpful tasting notes and pairing suggestions.

The service, too, could be more helpful. We accidentally doused our already-limp calamari with a glass of worth-crying-over Klinker Brick "Old Vines" Zinfandel — plush, full-bodied, and at $29 a bottle, one of the less expensive offerings — without anyone noticing or coming to our assistance.

As a result, our visits left us unimpressed. Despite the tools at its disposal, Wine Bar Rocky River seems interested in being neither a "serious" wine bar nor a notable restaurant. Instead, it's just another (albeit upscale) neighborhood tavern: simple, uncomplicated, and nearly as generic as its name.

Maybe that's the way the owners want it; maybe that's what the clientele demands.

Still, it seems like a waste of great ingredients.