Massillon hosts dinner and dancing . . . beneath an overpass. 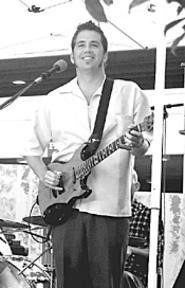 Patrick Sweany (pictured) doesn't usually perform alfresco. But the blues guitarist braves the outdoors at Saturday's Bridjazz -- a dinner and dance beneath Massillon's Lincoln Way Bridge -- to play tunes from his latest CD, Henryfordbedroom. "He rides around the country in a Ford and sleeps in it," says organizer Dan Bates. "But he's good. He can cook."

Speaking of cooking, the evening's menu includes smoked chicken, shrimp, and ribs from Massillon's Old Carolina Barbecue & Catering Company, which won last year's People's Choice award at the Pro Football Hall of Fame Rib Burn-off. Says Bates: "People don't expect to be served dinner on a white tablecloth by candlelight under a bridge." Yet it happens from 6:30 to 11:30 p.m. on Fifth Street Northwest, underneath the Lincoln Way Bridge in Massillon. Tickets are $38; call 330-833-5830. -- Cris Glaser

Growing Up
Peter Pan gets a facelift.

Martin Friedman has found Neverland, and it's nothing like the music-filled place we've seen onscreen and onstage for the past 50 years. "I didn't want to do the same old version," says Friedman, who's directing Lakeland Theatre's production of Peter Pan, or the Boy Who Would Not Grow Up (which opens Friday). "It's darker and more adult." And like Finding Neverland, last year's fantasy-filled biopic about Pan writer J.M. Barrie, Lakeland's take on the classic is just as much about the audience as it is the story's subjects. "It's about our ability to go to Neverland," says Friedman. "Some of us have that imagination, some of us don't." Peter Pan is at Lakeland Community College's Performing Arts Center (7700 Clocktower Drive in Kirtland) through July 24. Show times are 8 p.m. Friday, 2 and 8 p.m. Saturday, and 7:30 p.m. Sunday. Tickets are $8 and $12; call 440-525-7034. -- Michael Gallucci

Michael Bublé is this generation's Harry Connick Jr., but without the smarm. For one thing, the 28-year-old Canadian doesn't disdain rock and roll the way Connick does. Granted, the pop songs -- Marvin Gaye's "How Sweet It Is," Leon Russell's "Song for You" -- on his latest CD, It's Time, aren't exactly ass-shredders. And his originals are ultra-sappy. But Bublé sings the songs of yesteryear (in this case, the swing era) with a silky voice and a contemporary spin that, well, swings. Bublé is at the Palace Theatre (1519 Euclid Avenue) at 8 p.m. Wednesday. Tickets are $46.50 and $56.50; call 216-241-6000. -- Michael Gallucci