Undercover of the Night 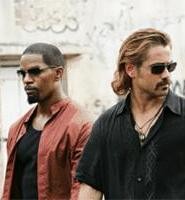 Michael Mann's Miami Vice is like a car that's been stripped of everything but its two bucket seats and rebuilt from the ground up. The protagonists are a pair of detectives named Sonny Crockett (Colin Farrell) and Ricardo Tubbs (Jamie Foxx), and a cover of Phil Collins' "In the Air Tonight" finds its way onto the soundtrack, but so little else about the film evokes the 1984-'89 television series that the title seems almost perverse. About half the movie doesn't even take place in Miami, and even there the turquoise waters and white sandy beaches look muddy and gray under cover of night. In a career marked by an obsession with the intricacies of law enforcement and criminal activity, this may be Mann's most brutally efficient cop moviet yet: The characters scarcely have personalities; they are nearly soulless nocturnal warriors. But watching them go about their deadly serious business nevertheless puts you in a state of high anxiety.

The plot of Miami Vice (very loosely based on the episode "Smuggler's Blues" from the series' first season) is tangled, and it moves as quickly as a speedboat, hopscotching between Miami, Paraguay, and Cuba. It begins with an interagency sting operation gone awry: Two federal agents and the family of a supposedly protected informant (an excellent, desperate John Hawkes) are dead. Somewhere within the FBI or DEA or ATF, there is a security leak, and it falls to Crockett and Tubbs to ferret it out. So they will infiltrate the network of a mid-level drug trafficker called Jose Yero (John Ortiz) by posing as transporters willing and able to ferry Yero's product from South America into South Florida. That accomplished, they will move even deeper, until they are enjoying a private audience with the enigmatic kingpin Montoya (played with chilly conviction by Spanish actor Luis Tosar).

The layers of deception -- and the ways in which Farrell and Foxx riff off each other -- are dazzlingly elaborate: Meeting Yero for the first time, Crockett and Tubbs accuse him of wearing a wire; later, they will "give" Yero back a load of stolen product that they themselves stole, thereby insinuating themselves further into his operation. In such moments, one is reminded that few have put this world of cops and crooks on screen with greater verisimilitude than Mann (Heat, Collateral). His characters talk the lingo and move with the assured physicality of a soldier on the battlefield. When someone fires a gun in a Michael Mann movie or cracks a safe or negotiates the terms of a drug deal, you do not question it.

None of that description will quite prepare you for the visceral impact of Miami Vice -- the way each round of the characters' high-powered weaponry lands with unnerving force under the shimmering pitch blacks and pearl grays of Dion Beebe's HD videography. (No director since Peckinpah has staged more repellently beautiful orgies of onscreen carnage than Mann.) But as is often the case in Mann's films, there is also a romance, which rears its head at the worst possible moment. Here it appears in the form of the Chinese-Cuban Isabella (Gong Li, speaking far more convincing English than she did in Memoirs of a Geisha), who's Montoya's money manager as well as his moll, though that doesn't stop Crockett from falling hard and fast for her confident charms. She, too, recognizes something in him -- a fellow lost soul. And midway through, there is a ravishing sequence -- one that single-handedly restores mature adult sexuality to Hollywood movies -- in which they abscond to Cuba together to begin their affair that cannot be, amid the ramparts of a place that once was.

Mann has done something transformative with Farrell: The Irish actor has never had this much charisma and natural authority in a role, and as he navigates that gray area between Crockett's real identity and his fabricated one, revealing subtle fissures in the character's cocksure facade, he's fascinating to watch. But it's not often enough noted that Mann is the creator of many strong female characters, and Gong's Isabella may be the most complex he has dreamt up since Tuesday Weld's tragic Jessie in his debut feature, Thief. She is, like Crockett, undercover in a way, living a life that has been chosen for her rather than one she has chosen for herself, and in their intensely beautiful scenes together, they dream of a freedom that eludes them both. Indeed, in Mann's world, the most dangerous force isn't the threat of the heat around the corner, but the momentary flicker of true, impossible love.