Quintron and Miss Pussycat struggle to keep their freak scene from going under. 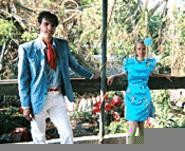 When George Bush claimed something to the effect that there was "no way we could have known that the levees would break," our first thought was to compile a mixtape for Dubya of the hundreds of songs detailing New Orleans' eventual watery demise for just that reason -- our two favorites being "The Big One's Coming" and "Underwater Dance Club" by one-man-band/inventor Quintron and his puppeteer wife, Miss Pussycat (aka Panacea). While so many of the city's musicians achieved success by bowing to the tourism board and following jazz, blues, and funk blueprints, no one's sound truly epitomizes the wild personality of contemporary New Orleans like Quintron and Miss P's.

With and without his best girl, Quintron has toured the world for 14 years -- including once with the White Stripes and once with the Cramps -- and released at least eight albums. The couple's concerts begin with musical puppet shows that could rock an acid test as easily as a kindergarten classroom. Then, accompanied by the increasingly up-front yelping of Miss P, Quintron's wah-wah organ channels the stomping energy of Jerry Lee Lewis, with the addition of feedback and four-to-the-floor techno breakdowns executed on a light-activated synthesizer, invented by Quintron, called the Drum Buddy. (He was "banned" from Clear Channel venues for setting it afire onstage.)

The couple's other great talent has been hosting huge concerts at their underground Ninth Ward speakeasy, the Spellcaster Lodge, which for 14 years has prided itself on throwing together esoteric bills of international one-man bands and transvestite rappers, all looking like they've been rained on. It's the same nightspot that the duo -- in the aforementioned "Underwater Dance Club" -- prophesied would one day be flooded.

One month after Katrina devastated New Orleans, on St. Claude Avenue -- a street considered dodgy even before it was strewn with dead city buses and the guts of every house for miles around -- Quintron emerges from the Spellcaster's dark belly, where he's spent days demolishing walls covered with black mold, trying to do what he can to keep his home from being condemned. The upstairs living area and puppetry studio survived, but the house's front gables were blown down the street. The couple escaped with all their touring equipment, but Quintron's 1937 Hammond B3 now sits outside on St. Claude with the rest of the trash. The couple had no insurance, but Quintron is looking on the bright side. "No matter how much this costs us to fix," he says, "it still won't be as much as I would have given those insurance fuckers the last 14 years. So I win."

Sitting atop the Spellcaster's cherry-red deck amid scattered clawfoot bathtubs and pots of cacti, Quintron recalls the Mad Max vibe that prevailed in the city even two weeks after Katrina. The once-famed view -- an all-encompassing vista of New Orleans' most notorious and enigmatic poor neighborhood -- is today a panorama of mud-coated cars and stranded motorboats. "People were driving city buses around St. Claude like bumper cars," he recalls. "The mechanics across the street" -- with their strange, hand-painted "No Cat Selling" sign out front -- "stayed open the whole time, fixing military cars on credit. And the whole neighborhood was shopping at Dora's," Quintron says with a smirk, referring to the thoroughly looted convenience store next door. (Someone did break into the Spellcaster, but just for liquor, which Quintron, like any New Orleanian, empathizes with and forgives.)

But a harrowing event occurred after New Orleans' true chaos had ended and the Spellcaster's reconstruction had begun. After they'd spent, as Quintron puts it, "a long day dressing up like movie stars and taking pictures with the EMTs among the wreckage," the couple's generator was humming along on their back porch as they lay down for a nap. At some point Miss Pussycat got thirsty and stood up to get a glass of water. "And I heard her fall right down. But I remember not really realizing that this was something I should worry about," chuckles Quintron, who hadn't understood that he was inhaling toxic gas fumes. "Then I stood up too and bam, fell right down. And that didn't seem wrong either; I just thought, 'Ah, lying down, cold floor, feels good.'"

"Until somehow I realized, 'Oh, my God, it's the generator!'" Panacea recalls by phone from her parents' house in Oklahoma. "I couldn't move, though. I tried to wake Quintron, but his face was green and his eyes were rolled back in his head." Miss P somehow dragged her exceptionally tall husband out onto the deck, where they lay until paramedics arrived with oxygen tanks. They almost died.

In the middle of all this, the couple's new record, Swamp Tech (4 Life), came out on Tiger Beat 6 records. The album, with an accompanying Electric Swamp puppet DVD, continues Quintron's evolution from wild noisemaker to writer of rocking dance songs with southern themes, such as "Shoplifter," about stealing "alligator shirts and catfish shoes" from a shop on Canal Street. Miss Pussycat wigs out confidently on "Fly Like a Rat," and the fast and happy "Love Is Like a Blob." Though the organ sound on Swamp Tech is heavier and dirtier than on their clean, tight previous record, Are You Ready for an Organ Solo?, the new disc could have used another layer of the dynamic noise that makes their live shows so rich and wild. But Quintron's soul-shout vocals (in which he proclaims himself "a shoplifter," "a badass," "a French Quarter faggot," "the God of thunder," and "the dream captain") finally take command for a solid rock record that features no guitars and an electronic album that never sounds synthetic.

Q and Miss P are determined to resurrect the Spellcaster -- and New Orleans. While the body count of New Orleans bands is still being compiled, the city can breathe easier, knowing that one-man bands don't break up.