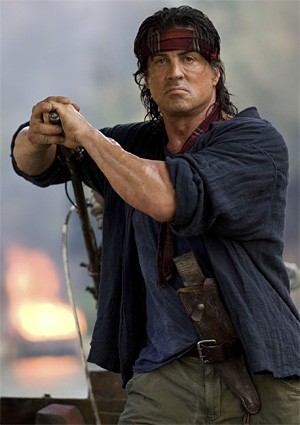 A fourth Rambo? The question isn't "Why?"; it's "What took so long?" Was America's avenging angel of meat just planning to sit out all the crap the world's stepped in since we last saw him 20 years ago in Rambo III, when he was fighting Charlie Wilson's war in sunny Afghanistan?

At first, that seems to have been the plan. Seen toiling sullenly in Thailand, where the big lug calls home these days, John Rambo can't even enjoy his job gathering death-fight cobras. But worry not: This is Sylvester Stallone, the former heavyweight champ of grudge-match cinema. Rambo will bust heads soon enough.

What a strange, feverish, spasmatic movie Rambo is — though not really much stranger or clammier than Stallone's other movies of late as actor, writer, and director. After the naked knuckleheadedness of everything from Cobra to Judge Dredd, 2006's Rocky Balboa dripped more moroseness than go-the-distance theatrics. The hero spent most of the movie wandering old haunts that no longer exist, rehashing old glories that bored everybody, missing all the dead people once in his corner.

Rambo gives off an even danker stench of desperation. Gorier, meaner, and uglier than anything Stallone has made before, it seems initially as wary of being pulled back into a dirty job as its reluctant hero. Once committed, though, Stallone again sets out to prove that nobody can explode more heads, aerate more guts, and perforate more evil ethnic extras.

So when Christian humanitarian-aid workers interrupt Rambo's busy day of cobra-wrangling, hoping to hitch a boat ride upriver to strife-ravaged Myanmar, the older, heavier, no-longer-shirtless ex-action hero agrees. Sure, he plays hard to get at first. Without weapons, he warns the do-gooders, they won't change anything. That prompts one to chide him, "Thinking like that keeps the world the way it is." "Fuck the world," sneers Rambo. But the group's lone woman, doe-eyed Sarah (Dexter's Julie Benz), stirs his inner peacenik as well as his latent gallantry.

As soon as the group's baby-faced pacifist spokesman (Paul Schulze) tsk-tsks Rambo for offing some scumbag rapist river pirates, you know these weaklings are torture bait. Sure enough, once Rambo drops them off, they're soon in the clutches of ruthless warmonger Tint (Maung Maung Khin), the Strother Martin of Southeast Asia, whose idea of fun is much like co-writer-director Stallone's: footraces through rice paddies studded with land mines. Rambo agrees to ferry in a rescue team of mercs, whose skepticism about their scowling boatman ends about the time he wipes out an entire Burmese detail with just a bow and arrows.

Revenge-movie law insists that the bad guys must justify the severity of the Big Payback, and Stallone doesn't pussyfoot through these moviemaking dictums. The leering, pillaging Burmese hordes are depicted with a vehemence that makes World War II slap-the-Jap propaganda look pensive. The pit-of-hell prison camp, awash in red smoke flares and stocked with carnivorous pigs, resembles nothing so much as Staying Alive's infamous "Satan's Alley" number. The movie's fire-sale production values only heighten its nastiness. As military madman Tint scours villages to root out and kill ethnic rebels, he's given to oratory such as, "If you go against me, I will feed you your intestines!"

But the human-rights abuses of Myanmar's real-life ruling junta have, at the very least, suspended its right to fair representation in a Sly Stallone joint. And so Rambo climaxes with a neck-breaking montage as hundreds of enemy soldiers, hopelessly outnumbered by Rambo, go down in a battery of extra-squishy beheadings, explosions, and mutilations. By that point, even the movie's love-thy-neighbor wimps are ready to pound skulls with rocks. The message? If killing is what you do best, just make sure you kill the right people.